Once upon a time (in 1781) a proud British general (Cornwallis) had to surrender. He was so upset that he refused to go to the ceremony and a subordinate handed over his sword for him. The American general (Washington) refused to take the sword and called for a loyal officer to accept the surrender. There was much irony in the situation, considering this other officer had been forced to surrender without honor and ceremony months before; now he was accepting the surrender of his enemies… 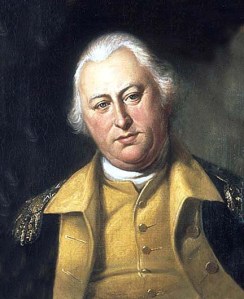 Who was Benjamin Lincoln? Here are some “fast facts” about this American commander:

Benjamin Lincoln is one the early American military commanders often neglected in the history books. He didn’t have the slyness of Francis Marion, the victories of George Washington, or the scandals of Benedict Arnold. Yet Lincoln was a steady and reliable commander.  He took part in military campaigns that led to the surrenders to two large British armies (Saratoga and Yorktown).

However, I think the best testimony of his loyal character is found in the aftermath of Charleston. Forced to surrender, he returned to Washington’s Army, likely feeling worried, ashamed, and unsure what would happen. And he’s welcomed back with no formal questions or court marshals. Other generals in the same war surrendered (or were defeated) and faced disgrace: not Lincoln. It seems that his peers understood the desperate situation in Charleston and that he would not have surrendered unless there was no other option. His loyalty was never questioned.  This shows the true patriot.

Thus, although Benjamin Lincoln faced great difficulties and even defeat and surrender, his trustworthiness and dependability were well-known and he continued as a leader through the rest of the war and the in government formations years of America.

P.S. Look for some new features and changes to Gazette655 in the next couple of weeks.  And, as always, leave your questions or comments about this post!