“Over the Mountains and into the plains, Toward Rome we go; Hannibal knows the way to lead the elephant train through the deep and drifting snow…”

(Okay, that was kind of dumb…but it was one of those silly things a historian thinks of every once and while. If you feel inclined to “sing” it, it’s to the tune of “over the hills and through the woods to Grandmother’s house we go.”)

Anyway, back to subject: Hannibal Crossing the Alps. He was a Carthaginian, fighting the Romans in the 2nd Punic War, and he was originally a colonial general in Spain.

Today, we’re discussing the actual crossing of the Alps. (Part 3 in our series.) What was it like? When was it? What happened before they got there? What happened afterward?

March To the Alps Remember, Hannibal and his army were in Spain, and, if you look at the map, there is quite a distance between Spain and Italy. The Carthaginians first crossed the Pyrenees Mountains, beginning the march sometime in June 218 BC. They crossed the Pyrenees at the end of August. In the months before Hannibal had sent friendly messengers to the native Gaulish tribes along the route, and most, already hating the Romans, agreed not to fight the Carthaginians. (An uprising by the Gauls actually helped Hannibal by distracting the Roman armies). By the time the Carthaginians reached the Rhone River, they were fighting off Roman cavalry attacks and trying to “buy time” to get the army supplies (and those elephants) across the river.

Across the Mountains It was October when the Carthaginians reached the Alps. It’s difficult to know the precise dates of the crossing, but by early November 218 BC the army was in the Roman plains. Unfortunately, the native tribes in the Alps did not get the message that they were supposed to be friendly; these tribes fought Hannibal’s army and the Carthaginians sometimes had to resort to military fighting or tricks just to clear the trail of the warriors. Adding to the difficulty was the weather. 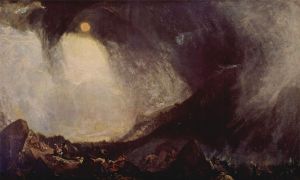 Here’s a quote from “The Young Carthaginian” by G.A. Henty which describes part of the crossing: “The next morning the march was renewed. The snow lay deep on the track [trail], and the soldiers found that, great as had been the difficulties of the ascent, those of the descent were vastly greater… Every step had to be made with care; those who strayed in the slightest from the path found the snow gave way beneath their feet and fell down the precipice beside them… But at last the head of the column found itself at the foot of the steep descent in a ravine with almost perpendicular walls….in it lay a mass of the previous year’s snow which had never entirely melted, but which formed with water of the torrent a sheet of slippery ice…. The troops…as they stepped upon it fell headlong, sliding in their armor down the rapidly sloping bed of ice… The cavalry attempted the passage, but with even less success… The engineers with fire and explosives blasted away the foot of the cliffs…and by morning a path which could be traversed by men on foot, horses, and baggage animals was onstructed for a distance of three hundred yards.” (pages 168-169, Preston Speed Publications)

Fighting Rome Once in Italy, the Carthaginians spent time resting and recovering in the homes and camps of their native allies. In the following years Hannibal’s Carthaginians fought many battles with the Roman legions and were frequently successful. However, because of lack of support from their mother city, the Carthaginians were never able to march directly on Rome and capture the city. Worn down by the fighting and with no reinforcements arriving from Carthage, Hannibal and his army were forced to become inactive in Italy and were recalled to undeserving Carthage in 203 BC. Hannibal and his Carthaginians had remained in enemy territory for 15 years, harassing the Roman armies and costing that Republic many resources which could otherwise have been used to fight the North African city directly.

Conclusion Hannibal successfully crossed the Alps and brought the war into Roman territory. However, because he lacked support from weakening Carthage, he was never able to capture the Roman capital and complete the victory.

Next week will be the last in the “Hannibal’s Alps” series, and we’ll discuss the logistics of the crossing and those fascinating warrior elephants!

P.S. Do you see any valuable military lessons in this incident?

3 thoughts on “Over The Mountains, Into The Plains”