Once upon a time I was studying U.S. History in high school, and I was reading a biography about President Harry S. Truman. While I came to the conclusion that I didn’t agree with everything he did, I decided that if I could’ve picked a historical president to be my next-door neighbor it would’ve been Mr. Truman. (After-all, Andrew Jackson would’ve been fighting duels at all hours, Teddy Roosevelt had a zoo of pets, and George Washington might chop down my cherry tree…)

My favorite story about Truman took place after his presidency. He’d moved to Kansas City, Missouri, and every day he would walk to his presidential library and volunteer! One morning he arrived especially early and answered the telephone saying, “Good morning, this is the old man himself.”

So meet our U.S. President of the week: Harry Truman! 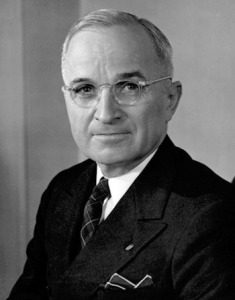 There’s a lot we could discuss here. I’m just going to mention the highlights, and if any readers want to add more in the comments, please go ahead.

As World War II was drawing to a close, Truman became president in 1945, after the death of President Franklin D. Roosevelt. Weeks into his presidency, Truman made the hard and controversial decision to use the atomic bomb against Japan.

After the end of World War II, Truman was instrumental in establishing the United Nations. For better or for worse, America would now take an extremely active and leading role in international affairs. He also oversaw the enforcement of the GI Bills as the American servicemen came home and re-entered civilian life.

The Soviet Union refused to give up the European Territory it had captured in the last weeks of World War II. Communism became America’s new enemy, and the Cold War began. Truman introduced the Truman Doctrine, which basically stated that the United States would use resources (economic and military) to prevent the overthrow of democracy in free nations threatened by Communism. The Truman Doctrine was an important precedent during the Cold War.

I believe the Truman Doctrine is one of the most lasting precedents from his presidency. It firmly established the American stand against communism and a willingness to combat it economically and militarily. While its interpretation may have caused trouble farther down the road, the precedent and decisive action was good.

Two of Truman’s best character qualities were decisiveness and humility. He could make a decision, follow through with action, and defend his choice. On Truman’s desk in the Oval Office was a sign which read “The Buck Stops Here.” He was the president; he could and would make decisions. He was humble. He wasn’t looking for glory. He could make fun of himself and had a pretty good sense of humor.

“Some of my best friends never agree with me politically.” (Harry S. Truman, 1947)

“I believe that it must be the policy of the United States to support free peoples who are resisting attempted subjugation by armed minorities or by outside pressures. I believe that we must assist free peoples to work out their own destinies in their own way.” (Harry S. Truman, 1947 – part of the Truman Doctrine)

Regarding the 22nd Amendment to the Constitution which limited the terms of a president: “They couldn’t include me in it because I was the President, and I can be elected as often as I want to be. I’m going to run again when I’m ninety. I’ve announced that a time or two, and you know, some —- fool looked the situation over and said, “When you’re ninety, it’s an off year,” so I can’t even run then. I didn’t know I was going to stir up all that trouble . . . “ (Harry S. Truman, 1958)

“It is amazing what you can accomplish if you do not care who gets the credit.” (Harry S. Truman)

He was a president who could make hard decisions and get things accomplished. He took responsibility. He was humble. He was “down-to-earth.” He loved his family. He liked to play the piano while his daughter sang.

I like Harry Truman because of his humility and his “common American” attitude. As I mentioned at the beginning of this post, Harry Truman seems like a person who you’d want as your next-door neighbor.

“Good Afternoon, Mr. Truman. I just baked some oatmeal cookies. Are you and Mrs. Truman at home? Could I bring some over? Could we discuss current politics and foreign affairs? I know, we kind of got into an argument last time, but I still respect your opinion.  Sure, I’d be happy to play the piano too. Okay, I’ll be over in a second. Bye…”

Well, Mr. Truman is not alive any longer, so I will never have him as my “presidential next door neighbor.” But it does make me consider: what type of person (neighbor) do I want to be? I’d say we Americans have a pretty good example in the unpretentious, patriotic, humble, and humorous character of Harry Truman.

P.S. Which U.S. President would you want as a next-door neighbor?

Leave a Reply to Which American Presidents Served In World War I? | Gazette665 Cancel reply