We tend to shy away from harsh topics like famine, death, and the aftermath of war. It is human nature to look away in horror. As a historian, I used to look the other way too. I’d read about “great” battles and quickly close the books when graphic accounts of the casualties appeared. Is this right? No. If you’re going to study the events of the past, you must understand the harsh situations and outcomes.

Today, we have a solemn topic: The Great Famine in Ireland beginning in 1845. It is dark, but it paved the way for a brighter future. I am not going to share graphic accounts, but I believe it is important to have a basic understanding of this turning point in Irish History. Indeed, some historians consider the famine years to be the dividing line of this country’s past; they call the eras “pre-famine” and “post-famine” years.

England conquered Ireland. (Sorry, that’s the blunt truth and we could spend a month unraveling all the details.) England was Protestant, Ireland was Catholic. English nobles were given large tracts of Irish land and the native Irish people were forced to become tenant farmers on very small portions of land. The years passed. The land owned by Irish families was divided and divided and divided, giving small inheritances to the sons. With small acreages, there wasn’t enough land to grow wheat crops to feed a family. The Irish discovered that potatoes grew well and they could grow enough to feed their family in their small fields.

Potatoes became the staple crop of the Irish. It was also a source of food for their livestock. By the early 1800’s, the Irish population was dependent on the potato for their food.

Then disaster struck in the form of a nasty fungus. The Potato Blight came to Ireland. How? That’s still a matter of debate. It seems probable that it may have arrived via potatoes in the holds of ships coming from America. (It should be noted that Ireland had had ruined potato crops before, but the 1840’s the was the worst and produced The Famine.)

The agriculture disease turned healthy potatoes into mushy, yucky, rotting, stinking piles of disgusting food. Not even the animals wanted to eat it.

To make matters even worse, there weren’t many potatoes left to seed. (You can plant potatoes and they will grow into the next year’s crop.)

In 1845 when the Potato Blight struck officially beginning the famine years, 1/3 of the potato crops was destroyed. The following year 3/4 of the harvest of affected. In 1847, the seed potatoes were lacking and in 1848 the crop, although healthy, was only 2/3 of pre-blight harvest.

There is debate on the actually death toll of the Famine Years. The census writers in 1851 recorded 21,770 deaths from starvation in the previous decade (1841-1851) and an additional 400,720 deaths from disease. Historians have debated these numbers, but the harsh fact remains: people died of starvation.

Many Irish families found themselves evicted from their land. Some wandered the countryside and city streets begging and looking for work. Others simply made the heartbreaking decision to leave.

While there are “conspiracy theories” regarding the English government’s response to the Irish Famine, I do not accept these ideas. Victorian England was caught up in a whirl of industry and fashion – certainly the reports from Ireland were shocking, but it was remote and, sadly, un-concerning to many people.

It should be acknowledged that from all parts of the British Empire donations were sent and even Queen Victoria gave a personal donation for famine relief. Other nations also reached out. America sent food and thousands of dollars.

Efforts were made, but they were not as concerted as they might have been and the extent of the famine was almost beyond the comprehension of those who had not seen it.

One great fault is that food exportation from Ireland was not halted. Even during the worst famine years, the country continued to export grain which should have been used to feed the starving population.

The famine roused the anger of the Irish people. Right, wrong, or indifferent, they blamed the English government. This dissent slowly grew in the following decades and eventually led to the fight for Irish independence in the following century.

The population growth of Ireland was stunted. Some counties saw an almost 30% decline in population numbers. This changed the social structure of the country.

Immigration from the country…read the next section – 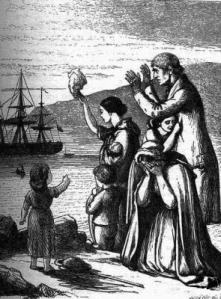 The famine and eviction from their land forced many Irish families to travel across the sea to America. Irish immigration did not begin with the famine, but the numbers of immigrants significantly increased during the hard years. While America was a growing land of opportunity, Americans were not always open to the Irish immigrants.

With a different religion, accent, and traditions, Irish immigrants sometimes faced discrimination. However, they banded together into Irish American communities and slowly, steadily won the respect of their American neighbors.

Irish Americans fought in the American Civil War (more about that on Saturday), helped build the transcontinental railroad, worked in American industry, and filled many, many other important roles in the growing country.

The Great Famine produced extreme hardship and suffering in Ireland. It was a disastrous turning point, but it paved the way toward a new nation. For some families, a new future was the sad decision to leave the Emerald Isle and journey forth to a new land, bring their strong work ethics and traditions to the American society.

P.S. The Irish were dependent on the potato for a food source. Is there anything in modern society that we are far too dependent on and could produce a serious disaster if it was taken away? Share your thoughts.