Today is our last day in Irish History and we are actually looking at Irish-American History! Remember on Thursday our discussion about the Famine in the 1840’s and how it sparked a new wave of immigration to America? Sadly, many Americans weren’t welcoming to the Irish people, and some were downright hostile. The Irish-American community faced an uphill battle for recognition as responsible American citizens.

Wait? Did I say “uphill battle”? Yes. And I meant it. Literally. 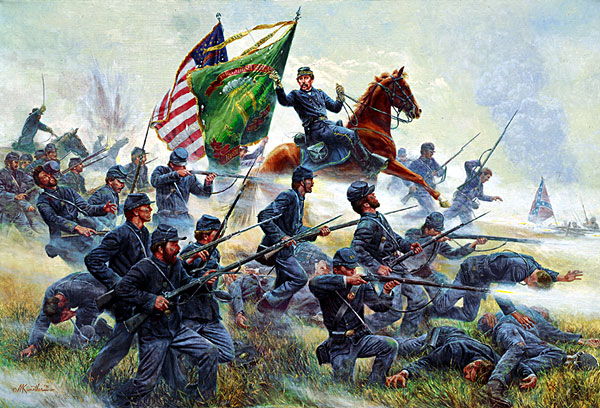 “Raise the Colors and Follow Me” by Mort Kunstler (No Copyright Infringement Intended) http://www.mortkunstler.com/html/art-limited-edition-prints.asp?action=view&ID=421&cat=136

The American Civil War was fought between 1861 and 1865; the northern states (Union) wanted to preserve the unity of the country while the southern states (Confederacy) had seceded because they felt their state’s rights were being violated.

Irishmen fought on both sides during the war and sometimes ended up facing each other on battlefields. Again, this is another topic we could spend a month talking about, but for the sake of keeping this post under 1,000 words, we’re going to focus on THE Irish Brigade in the Union Army of the Potomac.

The war started and many people thought it would only last 90 days. One of the “90 day regiments” was the 69th New York. This regiment was made of Irish American volunteers. At the Battle of Bull Run (those of us who are Rebels usually call it First Manassas – ask why in a comment if you don’t know) the 69th was one of the few Union regiments to leave the battlefield in “good order” while everyone else was fleeing for their lives. That steadfast courage was the beginning of the legend.

The 90 days were up. But Colonel Meagher convinced many of the men to re-enlist and also began recruiting a brigade (approximately 2,500 men). And so the famed Irish Brigade was formed. Ladies of New York presented the regiment with beautiful green flags, decorated with gold Irish Harps. And they marched off to battle.

Some of the Irishmen had lived in the United States for awhile. Others had only recently arrived in America. What motivated them to fight? It varied. Some wanted training so they could go back and raise armies in Ireland (that didn’t go so well), others wanted to represent Ireland on foreign battlefields, and, I think, many of them wanted to prove to the rest of the nation that they were patriotic citizens. It was a battle for identity and respect.

Irishmen in the Fight

The brigade was known for unfailing courage and on several occasions were sent forward to make impossible charges against strong enemy positions. The unit suffered about 85% casualties during the war. (It is believed only two other Union brigades suffered higher casualty rates during the war.)

It was once said, “When anything absurd, forlorn, or desperate was to be attempted, the Irish Brigade was called upon.” This attitude likely began out of the prejudice feelings, but I think it soon morphed into respect and a knowledge that, if it was possible, the Irish Brigade would do it.

A Reputation Preceding Them

At the Battle of Antietam (Sharpsburg) in September 1862, the Irish Brigade was ordered to charge the position Sunken Road (now called Bloody Lane). Although their assault was unsuccessful, they got within 30 paces of the lane before retreating in formation. Both sides were impressed with the courage of the Irish Brigade and noted their distinctive green flags.

About 3 months later at the Battle of Fredericksburg, the brigade was forming to charge across open ground to attack Marye’s Heights. Looking through field glasses, a Confederate general spotted the green flags and supposedly said “There are those —- green flags again.” The Irish soldiers made the charge and again had the disastrous distinction of getting closest to the Confederate position.

28th Massachusett’s Flag – the regiment was part of the Irish Brigade so this is one of those green flags.

The green flags of the Irish Brigade were known in both armies. The unit was one of the most reliable and Union generals knew it. Confederates knew if they saw the flags to prepare for a tenacious assault.

“Spirit” of the Brigade

Throughout the Union Army of the Potomac, the fighting powers of the Irish Brigade were known and acknowledged. But in a more peaceful, camp setting, the brigade had another reputation. And on St. Paddy’s Day, the Irish Brigade camp was THE place to be.

In 1863 they hosted a big party, inviting officers and their ladies; even the commanding general of the army (General J. Hooker) came. Mass was celebrated under the guidance of Father Corby and then the entertainments and hospitality began. Horses races, a fancy lunch (by military standards), footraces, weight throwing, hurdle jumping, and other contests. In the evening there were theatrical presentations, recitations, and music. And, of course, being Irish, there was “spiced whiskey-punch.” Indeed, everybody wanted to be at the Irish Brigade camp on St. Patrick’s Day!

Legacy of the Brigade

The soldiers of the Irish Brigade won the respect of their non-Irish comrades. There was a new-found respect for these “foreigners” who were willing to die for a country that was not their native homeland. By sheer courage and patriotism, the men of the Irish Brigade wrote a new reputation for themselves and their fellow immigrants to America. They cared enough to die for a country they had just arrived in.

I believe that the actions of these Irish soldiers opened the hearts of Americans toward these new immigrants. Sure, prejudices continued (that’s human nature unfortunately), but most of the harsh political movements against the Irish faded. Many who had supported those movements must have changed their minds when they saw “those green flags.”

P.S. For sake of time, I could not mention many of the other Civil War Irish regiments or companies. Please leave a comment if you have a favorite unit or particularly noteworthy story!

3 thoughts on “The Irish Brigade”