Hey, step aside, Napoleon. We could call this era “Jane Austen’s Era.”

Ladies, if you’ve been suffering through the last three weeks of Napoleon, army organization, and battles, then hopefully this post will make amends. Gentlemen, don’t run the other direction just yet, we’re actually going to talk about the military in Jane Austen’s novels. 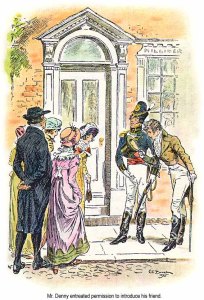 In case you’re not familiar with Jane Austen, she was single woman not in possession of a large fortune, but she loved writing. She wrote stories set in her contemporary world and addressed with irony such human qualities or flaws as prejudice, pride, sensibility, lack of sense, vanity, silly matchmakers, broken hearts, and persuasion. Her novels are considered classic English literature and are great fun to read. (My brothers might tell you something different, but quickly moving on…)

I have read and analyzed (probably over-analyzed) Pride & Prejudice, Sense & Sensibility, Emma, and Persuasion. Austen wrote a couple other books, and though I’m familiar with  their plots, I decided not to include them into today’s discussion since I haven’t actually read them yet. (If you’ve read them and want to add your observations on the theme, please go ahead and add a comment.)

The Military in Jane Austen’s Novels

One of the great things about Austen’s writing is that it’s set in the era she lived in and she was familiar with the customs and culture of her day. This adds great historical value to the novels.

Listing from the four books mentioned above, here are the main references or characters connected to the military.

Pride & Prejudice: George Wickham – a scoundrel who’s hiding out in the militia, and then a friend buys him a commission in the regular army after he does something really bad. Militia Regiment – a regiment is quartered in the local town and the officers frequently attending gatherings at the local residents’ homes and flirt with the girls. Camp at Brighton – there’s a large training camp near the seaside town of Brighton – not much else is specified other than it was “a whole camp full of soldiers.” Colonel Fitzwilliam – the man with no official first name, poor fellow. But Colonel what’s-his-name Fitzwilliam officially rescues the reputation of the military in this novel. He’s the fourth son of an earl, has a very gentleman-like manner, and is a responsible guardian of Miss Darcy.

Sense & Sensibility: Colonel Brandon – a silent bachelor, age thirty-five, and fond of flannel waistcoats. He served in the British army and was sent to the East Indies. Not much else is known about his service, but he knew how to shoot a pistol since he fights a duel in the story.

Emma: Set in a quiet country village presided over by sweet, well-intentioned matchmaking “princess”, this book doesn’t have much connection to Britain’s military. Captain Weston is the sole representative. He was from the little village of Highbury and enlisted in the militia, but not much regarding his service is known.

Persuasion: Captain Frederick Wentworth – the handsome antagonist/protagonist depending on which part of the novel you’re in. He was a young lieutenant when he met the heroine and had little wealth, but seven years later after capturing a few prize vessels he’s a very wealthy man. Admiral Croft – a retired commander come ashore; his wife sailed with him and they had been many places, including the East Indies. Captain Benwick –  a recently promoted captain who waited many years for promotion and fortune. Captain Harville – a captain living in Lyme and presumably waiting for a new command; it is implied he may have been in ill health or recovering from an injury. (This book has many references to sea voyages and adventures and I cannot possibly list all of them here.)

A Few Historical Things to Learn From “Storybook Military”

1. It was a “good” career Only the eldest son inherited the family property, so what’s a younger son to do? Colonel Fitzwilliam (fourth son of an earl) and Colonel Brandon (second son) were both packed off into the army, presumably with purchased commissions. Arthur Wellesley, the Duke of Wellington, who won the Battle of Waterloo, was also a younger son and started his military career with purchased commissions.

2. It was a hiding place for the bad guys Mr. Wickham is the example here, but it was more common than we’d like to believe. A very angry General Wellesley once said of his troops, “We have in the service the scum of the earth as common soldiers…” (Ah, new epitaph for Wickham?)

3. The English country world did not revolve around Napoleon and his battles Think of the book Emma, which was published around 1815. The characters do not seem to express interest in the world outside their safe and secure little area. Perhaps the gentlemen discuss the news in the papers when the ladies aren’t present, but on the whole there’s a sense that the big battles and wars with Napoleon don’t matter to these people. This is likely a good reflection on the feelings of this class of people.

4. Sometimes it paid…and sometimes it didn’t It is interesting to note than none of Austen’s characters seem to make much money in the army. Colonel Brandon and Mr. Weston come back to property, either inheriting the estate or purchasing a comfortable house. Colonel Fitzwilliam cannot support a family with his income and must abandon his interest in Miss Elizabeth since she also is without fortune. So I guess the lesson is: the army didn’t pay really well and this is supported with real historical evidence. Now, the navy on the other hand…Admiral Croft had enough savings to rent a baronet’s home, Captain Wentworth and Captain Benwick made large fortunes…but it’s implied (and historically accurate) that they are lucky characters. Captain Harville has been cast ashore with half-pay, not a pleasant experience for a man with a family to support. 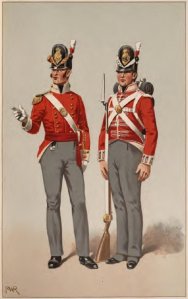 5. It is a truth universally acknowledged that the uniforms looked very handsome. In Pride and Prejudice Mrs. Bennet admits that even she “liked a redcoat” and she’s referring to a handsome uniform. Like these to the right.

Even Captain Wentworth was acknowledged by the overly-particular baronet when he appeared at the concert in Bath. I think it’s highly probably in the cultural setting that he was in dress uniform that evening.

But, a word of caution from Miss Austen, be sure of a man’s character before admiring him or his uniform –  you do not want Miss Lydia’s fate.

Jane Austen had a good sense of the feelings of the “common” people in her world. Her characters and the military themes woven into her novels are accurate when compared to historical accounts and real people of the time.

And you have a “historical excuse” to read her books again. Right? It is a truth universally acknowledged that Jane Austen’s books cannot be read too many times.

P.S. Who is your favorite “military character” in Jane Austen’s novels? And why?