Say the word Gettysburg and most people start thinking of cannons, a favorite general, the movie, monuments, or something like that. That’s because in our history books and culture Gettysburg is a battlefield, “hallowed ground” where we can get close to history and remember the sacrifices of previous generations.

But Gettysburg didn’t start as a battlefield. It was not marked on historic maps as “future battleground for the Army of Northern Virginia and the Army of the Potomac.” There weren’t signs in the 1700’s reading: Don’t live here; reserved for a big battle.

Gettysburg was a town. Re-phrase that – Gettysburg is a town. This was (is) a place where real people lived, worked, and played. In June 1863, they had no idea their streets and fields would be the background of war.

Today, as part of “Back to Gettysburg on Tuesday” we’re going to “step back” and see Gettysburg as a town. A pre-battle town. 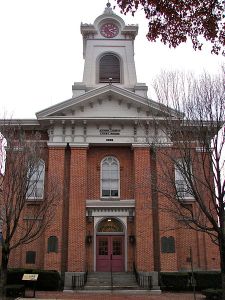 Imagine you’re moving to Gettysburg in the pre-battle years of the 1860’s. Here’s what you’ll find:

Founded 1786, Gettysburg is the county seat of Adams County and nine major roads converge here. It’s a town with a population of about 2,500, comprised mostly of folks with Dutch, German, or Scots-Irish Heritage. Also, about 8% of the population is African American; located just 7 miles north of the Mason-Dixon Line, Gettysburg is part of the Underground Railroad.

The homes and other town structures are built of brick or wood. There are sidewalks and gas lamps light the streets after dark.

If you’re coming for a visit, the railroad can bring you right into the north part of town. This will be convenient if you’re arriving as a student at one of the local colleges. There are two “institutes of higher learning” in Gettysburg: Lutheran Theological Seminary and Pennsylvania College.

The town has it’s fair share of politics too. The newspapers fan political debates, and,  representing different political sides, they cause much contention at times.

Now for communications…there’s a post-office and at least one telegraph office. Your letters will take a few days to get to the recipient in another location, but by telegraph it could be a matter of only hours. For communication in town, you could send letters, or – more preferably –  you could visit your friends or share news after church services on Sundays.

With seven churches in town, many denominations are represented. Faith and trust in God’s providence is an important part of life for the residents of Gettysburg.

Worried about education? No need to be. There’s a large public school in the town and also several country schools for the children of farm families. If you don’t want the children in a public school, then you can pay to have them attend a private school; there is at least one “finishing school for young ladies” in Gettysburg.

If you have to go to the county court, no concern. It’s in Gettysburg. Need an attorney? There are seven residing in town.

Not seeing the #1 convincing factor to live in Gettysburg? It might be there. Ask in a comment!

When I first started studying the town and civilians, I was surprised at the amount of industry, stores, and “civilization” in Gettysburg. These people were well-educated, religious, and hard working. There were many families (and I mean large extended families) living near to one another in the town or countryside of Gettysburg.

While it would be inaccurate to say “everybody knows everyone”, Gettysburg was a fairly close knit community. Gettysburg’s resources, the civilians’ sense of community, and the location itself played crucial parts in the unfolding of historic events which would change the image of Gettysburg from peaceful town to battlefield.

P.S. What do you think of when the word Gettysburg is mentioned? Had you ever really thought of pre-battle town or civilians before?

7 thoughts on “Gettysburg: It’s a Town”