Back to Gettysburg on Tuesday and today I’m going to be quiet and let the civilians tell their own story through their writing. (I will add clarification if necessary and I’d encourage you to read the military history overview of the battle for background information.)

We had often heard that the rebels were about to make a raid, but had always found it a false alarm. ~ Tillie Pierce (age 14)

We are getting used to excitement, and many think the enemy, having been so long in the vicinity without visiting us, will not favor us with their presence. ~Sarah Broadhead, June 24

What pen can tell or thought conceive the awfulness of the strife that has raged from between three and four o’clock of this afternoon until nine tonight! [July 2] The roar of cannon and rattle of musketry beggar all description. Hundreds of souls have been ushered into the presence of the great “I AM.” I pray for them. There is a silence around us now that is ominous of tomorrow’s struggle. Thousands of brave ones lie upon their arms [weapons], girded for conflict, snatching a few moment’s rest. ~Jane Smith

We know not what the morrow will bring forth, and cannot even tell the issue of today. ~Sarah Broadhead, July 2

My father looked at his watch and said: “We must all go into the cellar.” We complied and then began the terrific artillery duel of Friday afternoon, unequaled, I believe, for sound and fury in the annals of war. ~Henry Eyster Jacobs, July 3

The vibrations could be felt, and the atmosphere was so full of smoke that we could taste saltpeter. ~Albertus McCreary, July 3

The house was soon filled [with wounded] and eventually I overcame my sick, queasy feeling and could look at wounds, bathe them, bind them without feeling sick and nervous. Tears came only once when the first soldier came into the house. He’d walked from the field almost exhausted, threw himself into a chair, looked up at us girls and said, “Oh girls. I have as good a home as you. If I were only there.” And then he fainted. ~Jennie McCreary 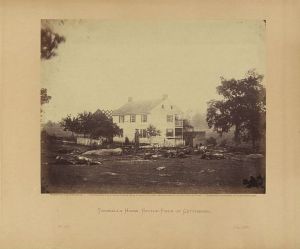 The whole landscape had been changed, and I felt as though we were in a strange and blighted land… ~Tillie Pierce

These were bitter days. But memories of them are softened when one considers the friendships that were made. ~Sallie Meyers

…never in my life will I have the same opportunity of seeing so many of the great men of the nation again.” ~Josephine F. Roedel [regarding the dedication of the National Cemetery, attended by Lincoln, Everett, and many other leaders]

Here [at Gettysburg] will posterity receive the same inspiration that prompted their ancestors to dare, to do, and to die… ~Tillie Pierce

The civilians of Gettysburg tell a different story than the soldiers who fought nearby. Most of the civilians didn’t see the “glorious” charges and tenacious defenses. But they heard it…and they saw what was left behind when the armies departed.

Their courage was different than the soldiers’…it was quiet and, to later generations, easily forgotten. Perhaps quiet courage has a strength we’ve underestimated. Perhaps it’s time to go back and re-evaluate these civilians’ beliefs, attitudes, and actions.

I spent months researching the battle and the civilians of Gettysburg and was overwhelmed by the unselfishness and strength of these people. That’s why I wrote a book. That’s why I’m writing this series of blog posts. That’s why I’m a stronger person today. The Gettysburg civilians have inspired me. I hope they’ll inspire you.

P.S. Which quote was most poignant to you? What do you learn from this small (very small) collection of quotes?