After detailing battle strategy and fierce fighting, many Gettysburg books come to a close with stark casualty numbers smoothed over by a quote from the Gettysburg Address. Often, there is no explanation of what happened to the wounded, the prisoners, or the dead.

What happened to a soldier at Gettysburg after he was wounded? How did he end up in a Gettysburg civilian’s home or barn? Today, we are exploring the wounded soldier’s route from the battlefield to his home through the Letterman medical system. 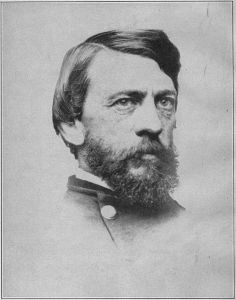 When the American Civil War began in 1861, the medical departments on both sides were severely understaffed, but no worries – the war will only last 90 days, right? (Wrong.) The disastrous Battle of Bull Run (First Manassas) brought the reality of war to both sides, and, among other things, it revealed the inadequacy of the medical divisions.

During 1862, a skilled doctor with military experience was appointed medical director of the Union Army of the Potomac. His name was Jonathan Letterman, and he determined to improve the quality of care for the wounded/sick men. His advancements in military medical care logistics were so successful that they are still used today, though “updated” with modern technology.

Dr. Letterman founded the ambulance corps (these ambulances were horse or mule drawn wagons) and a system of battlefield evacuation, which included first aid, triage, mobile field hospitals, and base hospitals. Dr. Letterman’s evacuation system was pioneered at Antietam and was successful at Fredericksburg and Chancellorsville.

Gettysburg proved to be a challenge for Letterman’s medical system. Expecting another battle in the following days, the Army of the Potomac took most the ambulances and doctors along as it followed Lee’s army. Only 106 doctors were left in Gettysburg to care for approximately 21,000 wounded. However, the actual battlefield evacuation system worked well; it was afterward that the problems really started.

In just a moment we’re going to “follow” a Union soldier through the Letterman Medical System, but I don’t want you to think the Confederates had no battlefield medicine plans.

The Confederate system was very similar to the Union’s, and they did have good doctors. Dr. Hunter McGuire is believed to have pioneered the use of ambulances during spring 1862 and if this is accurate, then he was using them before Dr. Letterman.

Unfortunately, the Confederate medical records were burned during the fires in Richmond (1865), so it’s hard to know exactly when they made changes and introduced new systems. Thus, we’ll use the Union perspective in this article.

A Wounded Union Soldier at Gettysburg

Wounded He tumbled to the ground as his left leg could not support his weight. He cried out in pain and frustration; the regiment moved forward, farther into that field. Glancing down, he saw blood coming from his left leg. He drank the last drops of water in his canteen and eased into a semi-comfortable position. Unlike some of his comrades who were staggering to the rear, he couldn’t move and would have to wait for help. 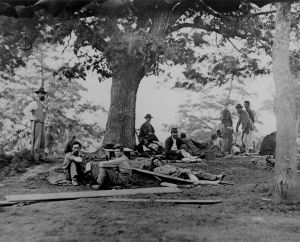 “First Aid Station” A short time later, some stretcher bearers came running from the little stand of trees a hundred yards back. They found him, hoisted him onto the wood and canvas stretcher and began to run back to shelter; a few bullets flew around them. After the horribly uncomfortable stretcher experience, he found himself behind a little rise of ground, shaded by some trees in this semi-protected area. Someone bandaged his leg – “You’ll lose the leg, but you’ll be alright. We’ll get you on an ambulance when they arrive.” Other men around him weren’t so lucky; the ones who could walk were told to head to the field hospital three miles back, others were badly wounded and died before the ambulances arrived.

Field Hospital The six men crowded into the ambulance breathed a sigh of relief when the bumpy wagon came to its final halt. He was hastily examined and placed in a row outside the door of a house. The sun beat down, then darkness came. Now, the surgeons in the parlor were working by lantern light. Not every doctor was a surgeon, only the most careful and most qualified were on the surgical team at this brigade or division hospital; he was grateful for that. Then it was his turn. The table was wet, the pain was bad when the surgeons examined…then he didn’t remember much, the pain faded a little with the anesthetic. When he woke up, he was lying in a barn and his left leg had been amputated. He was thirsty. Hours and hours later, a frightened young girl brought him a cup of water and some food. Feverish days passed. 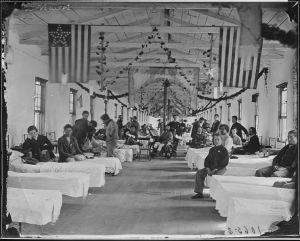 General Hospital By mid-July, the surgeons decided he was well enough to be moved to a general hospital farther east. He was loaded into an ambulance with five other men and taken to the Gettysburg train station. There, they were placed in empty boxcars and the train chugged slowly eastward. He ended up in Philadelphia, but he heard others were sent to Baltimore, New York, Washington, or other large towns. The general hospital consisted of large, long, wooden building called wards; there were beds with sheets, good food, consistent medicine, doctors, and nurses. With care, encouragement, and a healthy diet, he recovered.

Home He’d written to his family as soon as he could, but today he couldn’t believe it; he was almost home. The train slowed to a stop and he could see his parents. Carefully, balancing his crutches, he got up and hobbled off the train. He didn’t know what would happen next. Maybe when he was stronger and the wound was completely healed, he could get a wooden limb. That would be better than using crutches all his life. But, he didn’t think about that. He was home. He’d gone from battlefield to home, and, receiving the best care possible, he had survived.

Unfortunately for the Gettysburg civilians, this system required the requisitioning of their homes, barns, and property for the use of field hospitals. (See Town & Country for more information.)

P.S. Do you see the similarities between the Letterman System and the modern military system? What are some technological advancements which have helped to improve first-aid on the battlefield or in civilian life?

14 thoughts on “From Battlefield to Home”