I’ve noticed something. If I mention the Napoleonic Era, most people start to run the opposite direction. “What’s wrong?” I wonder. Then I realize…it’s too complicated.

And – deep inside – I do understand. There are times I wish history was simpler. I know some of you don’t believe that, but it’s true…every once and a while. So as I’m here at my desk, gazing at the Waterloo books and resources littering my floor (that was the “refresher course” earlier in the week), I’ve decided to make it simple. 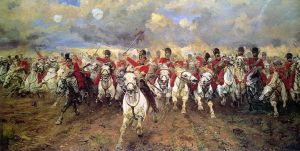 The 200th anniversary of the battle is approaching faster than the Grey cavalry, and there are some key things you need to know about the Battle of Waterloo. So prepare for the fast-action version of the story and by the end, you’ll have some new facts to impress your friends!

Let’s start with the date – it’s pretty easy – June 18, 1815. The location: Waterloo (that’s easy too!) Waterloo is located south of Brussels, in Belgium.

2. Napoleon Escapes! (And Starts It All)

About a year before, in 1814, Napoleon – the 10 year emperor of France – was forced to abdicate and was exiled to the island of Elba in the Mediterranean. Louis XVIII became the new French monarch and the other leaders of Europe met to redraw the borders of their countries after the Napoleon upheaval of the last decade.

Napoleon hated exile, so in March 1815, he escaped, returned to France, and raised a new army. But his time was limited. Napoleon only had One Hundred Days in power because…

Terrified European leaders of Russia, Austria, Prussia, and Britain declared war against Napoleon. (Interestingly, they did not declare war on France, rather they declared against a single man.) They did not want another decade of blood-shed because a “power hungry maniac” wanted their countries. The Allies – that’s what historians call the four nations listed above, during this era – made a plan and raised armies of their own.

The Prussians, commanded by General Blucher, and the British, commanded by Arthur Wellesley: The Duke of Wellington, assembled in Belgium. They faced Napoleon who had moved his army toward them.

4. The Weather Is Not Neutral

There was at least one thing the Allied troops and Napoleon’s men had in common. The 125,000 Frenchmen, 120,000 Prussians, and 92,000 British were miserable in the days leading up to Waterloo. It rained and it poured, and the roads became bogs, and the battlefield turned to mud. 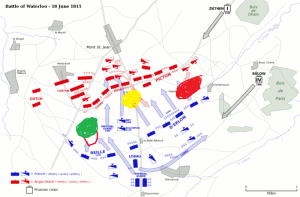 Some of you don’t believe my statement, but we’re going to make this easy. Picture a stoplight (okay, they’re also called “traffic lights”) lying on it’s side. See my map if you’re confused.

There are 3 important points in the middle of the battlefield, all of them are farm buildings: Hougomont (green light), La Haye Sainte (yellow light), and La Haire (red light). Behind the “traffic light” (where all the red is on the map) is the British position. The French are on the other side and are shown in blue.

The #1 thing to remember: the French attack, the British defend, the Prussians advance.

Now, a little more explanation…The French hammered the British defensive squares with cavalry and infantry attacks. The British held onto their position and their cavalry did retaliate with some semi-glorious charges. By mid-afternoon, Prussian soldiers arrived on the battlefield to aid the British. Napoleon sent in his most trusted soldiers – The Guard – and they were defeated. The French army fled, and the Prussians pursued. Got it? Good! That’s Waterloo in a nutshell.

6. The Aftermath Was Horrible

The aftermath of all battles is dreadful. However, Waterloo was especially awful. It was a small battlefield to begin with, and, by the end of the fighting, there were about 65,000 casualties…and that may be a low estimate.

Surveying his “field of victory”, the Duke of Wellington remarked, “Next to a battle lost, the greatest misery is a battle won.”

7. The End of Napoleon

No, Napoleon didn’t die at Waterloo. He fled. And surrendered to the British a few weeks later. The Allies eventually sent the former emperor and military genius into exile again. But this time he was forced to stay on St. Helena, an island in the Atlantic, between Africa and South America. Napoleon died in 1821.

8. The Beginning of Modern Europe

Waterloo is a decisive battle in world history. While the effects of Napoleon’s Era would linger for decades (and even centuries), the man himself was gone. Napoleon’s final exile ushers in a new era for Europe.

At the Congress of Vienna, Allied Leaders talked, plotted, planned, and carved up the map. Best of all, democracy was coming to Europe. Fearful of kings and emperors, the state ministers began to allow more freedom throughout their countries. This would be beneficial and revolutionary in the coming years. Modern Europe was emerging.

One of my all-time favorite historical paintings – “Wellington at Waterloo”

I may have exaggerated a little. But Waterloo influenced art, literature, education, politics, culture, and the military. (This could be a whole blog post on its own!) This turning point battle loomed large in people’s minds. It was the end of the “tyrant.” It was the beginning of a new era. And people realized it.

10. Our Perspective On Waterloo

Unfortunately, we’ve lost the idea that Waterloo changed Europe and was a crucial turning point in World History, as it marked the end of Napoleon and the maturing of democratic ideas. Many have this idea, that it happened so long ago…it doesn’t matter much anymore. Oh, so wrong!

Waterloo turns World History into a new course, but it also leaves us with examples of real people who would not give up. Want to know about the successful general whose mother declared she had no idea what do with him when he was a teenager? Interested in learning more about the men in the British battle lines, where they were from, what they wanted? Did you know that officers’ families waited anxiously near Waterloo to hear of their loved ones’ fate?

Today we talked about the simple overview of the Waterloo campaign, battle, and out-come. Now, I invite you to come along in the next few weeks to find the real people at The Crossroads of History.

P.S. Learn something new? Have something you’d like to add to my brief summary? I look forward to comments…