An example of the romanticized ideals surrounding the Battle of Waterloo

For better or for worse, romantic myths surround the Battle of Waterloo. There is something irresistible in the legends of the Duchess of Richmond’s Ball – a blossoming romance and then coming battle separating lovers. But how accurate are these ideals?

In the last few weeks as I’ve been brushing up on my Waterloo knowledge, I found myself searching for civilians…again. What was their experience of Waterloo? Today, I present you with a few of my notes regarding women in the Waterloo Campaign and on the battlefield. I think you will be surprised by some of the realities…but will find that the romantic ideals can still exist within the framework of history.

An artist’s idea of the Duchess of Richmond’s Ball

The Ball & “Society” Ladies Famous (or infamous), the Duchess of Richmond’s Ball on June 15, 1815, became the most well-known social event of the season in Brussels, Belgium, simply because the Duke of Wellington received the final and decisive information about French movements while at the ball. A number of noble British families – finding their money bags running low due to excessive gambling – raced for Continental Europe in 1814 and established their little clique in Brussels, seeking a “less-expensive” lifestyle. (Great idea…didn’t work!) So that’s how so many of the English nobility civilians happen to be “in the area.” Back to The Ball…it ended fairly quickly after Wellington called the officers and sent out orders to march and the ladies went into a panic, fearing the French would arrive the next day. (They sure had a lot of confidence in their army, didn’t they?)

Soldiers’ Wives & Families When a British regiment departed from England, lots were cast to decide which soldiers got to bring along their wives and families. These “lucky” civilians who got to come along endured the same hardships as everyone else in the regiment. The women often got to do all the laundry too…fun (or not!). There were certainly families present at the Battle of Waterloo, but they mostly remained with the supply wagons behind the fighting lines, hiding or helping to care for the wounded. However, there is one account of a young wife and her baby hiding behind a hedge too close to the battlefield; they were killed by cannon shot – a tragic reminder of the some of the dangers threatening these families.

“Peasant” Women Waterloo Battlefield was originally a farming community, and three major farms are key positions in the fighting area. These civilians were displaced by the war and fled for their lives, taking with them any possession they could carry. In the villages of Waterloo and Mt. Saint Jean, civilian homes were quickly converted to field hospitals. The women and their families who originally lived in this area would never have “normal” lives again – their property was completely destroyed.

Women in the Battle After the battle, a burial detail came across a young French cavalry officer, whose uniform markings indicated multiple years of military service. At some point in the burial process, they discovered the officer was actually a woman. Nothing else is known about her, but there are many questions: why did she enlist? How long did she serve? Did anyone know their officer was a woman? And…were there any other women fighting in the ranks at Waterloo?

Far surpassing the scandalous affairs or fictional accounts of Waterloo romance, the true story of Sir William and Lady Magdalene De Lancey is all that anyone could ask for when searching for a romanticized ideal of Waterloo. 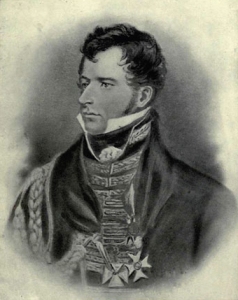 Lady Magdalene De Lancey was the twenty-two year old bride of Sir William De Lancey who was the quartermaster and trusted comrade of the Duke of Wellington. Married for only a few weeks when the Waterloo Campaign began and interrupted her honeymoon, Magdalene accompanied her husband to Brussels. When the army departed for the battlefield, she traveled to a safer city and waited for news of the fighting. Anxious days past, and conflicting news reports nearly drove Magdalene crazy. Finally, a definitive account arrived: Sir William was wounded.

Terrified her beloved husband would die before she arrived, Magdalene set out for Waterloo battlefield. The journey was not easy, but at her destination, Sir William was still alive. She spent six days caring for him, and some of the surgeons praised her calmness and nursing skills. Her husband did not get better, and there came a point where Magdalene gave up all hope of his recovery. Though she tried to prepare herself, Sir William’s death was almost the end of Magdalene’s world. She made certain he was buried with proper military honor and eventually returned to England, where she wrote her account of Waterloo.

While the romantic ideas swirling around the Battle of Waterloo are not necessarily without historical backing, there were many more women directly connected to the campaign, battlefield, and soldiers than we may have previously realized. While the nobility dominates the scene through the Duchess of Richmond’s Ball, soldiers wives, local civilian women, and women soldiers played a much larger (though often forgotten) role.

My favorite “Lady from Waterloo” is definitely Magdalene De Lancey…but I wish her story had a happier ending. She personifies a brave soldier’s wife and also represents the thousands of women who lost loved ones at Waterloo.

I hope this new perspective on the battle has been as interesting to you as it has been to me… This is our last blog post on Waterloo for a while since our new historical theme begins in July!

P.S. Had you ever considered the women caught in the battlefield drama of Waterloo? I’d like to hear your thoughts or questions in the comments. 🙂

3 thoughts on “The Ball & The Battlefield: Women & Waterloo”