One of my favorite history books about the American War for Independence is George Washington: Spymaster by Thomas B. Allan. The spy network used on both sides during this conflict was incredible, especially given the limited “technology” they possessed.

Today, we’ll use the American War for Independence setting and look at the role civilians played as spies. (If you missed my post on Tuesday, it’s an in-depth look at the spying going on in Gettysburg before that battle – check it out here.) 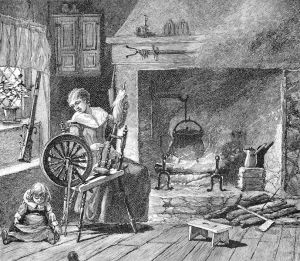 If this civilian woman is making uniforms, growing food, and sheltering spies, is she really a non-combatant? You decide.

Let’s be clear on something. A civilian is technically any person not enlisted in the military or with a para-military organization (like a police force.) But are civilians really non-combatants? That’s a big question, and one which I think each person needs to decide for themselves.

Here’s an example of how the situation becomes complicated. American Civil War: Southern farmer is not in the Confederate army, but he’s growing food to feed that army. He’s a civilian, but is he really a non-combatant? Can he really plead innocence when the enemy comes to burn his fields.

Another scenario: a civilian harbors guerilla fighters (pick just about any war you want). Are they really non-combatants?

You decide. But keep in mind – very rarely are civilians completely innocent bystanders. (A real moral dilemma for military commanders.)

So now that I’ve opened that topic for you to consider, let’s talk about some civilians (people not in uniform) who were playing very active roles in wars: spies.

One of America’s first known spying attempts went disastrously wrong. Nathan Hale, a 21 year old officer in the Continental Army, disguised himself as a civilian and trudged off to spy on the British. (Listen, if you’re ever a spy don’t hide your notes in your shoes; that’s always where they check first!) Well, poor Nathan was captured, made to take off his shoes, his notes were found, and he was hanged.

After that tragic occurrence, George Washington set up an official spy ring – and he was actually a member (Agent 711). Washington’s spy ring was mostly civilians, a couple double agents, and a few other civilians who were brave enough to send messages about what they knew. 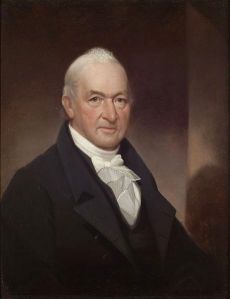 Benjamin Tallmadge (portrait is from c. 1800)

Benjamin Tallmadge was the leader of the spy ring. He was in charge of the unofficial military intelligence department, keeping track of secret agents, giving assignments, and developing the secret code.

Tallmadge’s code was a combination of numbers which represented certain words – names, locations, actions, or things. There were also ways to write words not assigned numbers by laboriously rewriting the words in code.

The British were very mystified by the “random” and “nonsensical” numbers and letters. They never successfully deciphered the code.

Want to see what the code looked like? Here’s some examples (with translations).

This spy ring was based near in the New York / New Jersey area and passed information from the British army headquarters in New York to George Washington. Not many of the members knew each other – some never even saw their contacts. (Security reasons, of course.) 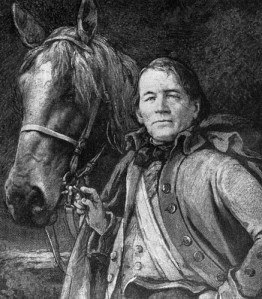 Artist’s idea of a member of the Culper Spy Ring

The spies in the city hung around taverns, coffee shops, and the loyal British newspaper offices, picking up fragments of news which they encoded and sent on the journey to Tallmadge and Washington. The messages traveled in various ways – left buried in certain locations for “pick-up”, slipped to the next person, carried in hats, bags, wagons, and who knows what else. At one location, a lady would signal if it was safe to transport messages by hanging a certain number of white handkerchiefs on her clothes line!

One of the disappoint things for historians is that we often don’t know much about the spies themselves or their missions. It was secret, and it has remained a secret.

Again, somewhat shrouded in appropriate mystery, Lydia Darragh was a secret agent in Philadelphia (not connected to the Culper Spy Ring as far as we know). Lydia was a Quaker, and she believed all war was wrong. But she wasn’t a very good non-combatant!

British officers liked to use her comfortable parlor for planning meetings. And Lydia eavesdropped! She scribbled down her news, folded the papers and recovered some buttons for her son’s jacket, sealing the messages inside the buttons. Her son then went to visit Washington’s camp…and somehow lost the buttons.

Legend has it that Lydia Darragh discovered an important British secret regarding a military movement. She left the city (with British permission and pass), met an American officer at a tavern, handed him her sewing kit, and left. In the sewing kit was the information about the British army that Washington had been seeking.

These are just a few examples from one war. Think of how many civilians have impacted the outcome of battles and conflicts with their spying missions. I wonder how many spies and mission are so secret we will never know about them… Probably more than we could ever imagine…yikes!

P.S. Got a spy story from a different war? I’d love to hear about it!