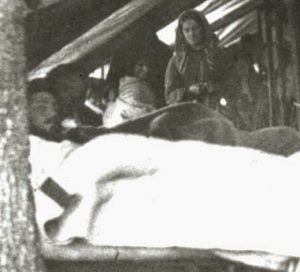 In the “grand scheme” of statistics, most ladies during the Civil War era remained at home, doing what they could to support the war effort in the domestic setting. Comparatively few ladies left their homes to work for months or years in the hospitals, and those women from the upper and middle class who did volunteer faced disapproval from family, friends, and society. However, daring ladies did step forward to meet the unspoken need in the medical field, and today we will examine their arguments and actions.

The Conflict of Nursing

From the beginning of the American Civil War, ladies volunteered to care for the sick or wounded. These brave women who traveled to hospitals or battlefields often faced great hardship, scorn, or resentment when they reached their destinations.

The main reason for society’s disapproval of ladies volunteering in hospitals was based on the reality that mid-19th century (pre-war) hospitals were for individuals needing charity, and these institutions were known for dirtiness, both physically and morally. Thus, it was shocking that ladies wanted to enter war time hospitals, risking their virtuous reputation.

However, the ladies had valid arguments!

Nursing was traditionally part of a woman’s role, and every woman was a nurse in her household. Ladies felt they were maintaining their domestic, caring attitude by bringing care and skill to the hospitals. They also argued that their self-sacrifice and compassion showed Christian devotion; they would help and comfort the wounded, institute a domestic and familial setting in the hospital, and interact with the injured in a maternal or sisterly role.

The needs of war demanded sacrifice, not always conformation to societies conventional system!

Once a lady overcame society’s frowns and transportation difficulties to actually arrive at a hospital, she faced new challenges. Accommodations were rough and often primitive. (Disease eventually claimed the lives of many nurses.)

Adding to the difficulties, the majority of surgeons resented the new nurses because they took up time and attention, “caused trouble” or were there for the “wrong” reasons. Battles over patient treatment, medicines, and hospital cleanliness occurred. The nurses saw their patients as individuals and were sympathetic to their discomfort. The surgeons tended to accept the fact that pain, disease, and death were realities and only provided the most basic care. Thus, a medical field vs. maternal instinct conflict raged in the hospitals.

But the nurses didn’t just appear to “wage war” and complain. They came with solutions. “Send these good intentioned, but incompetent ‘convalescent soldier nurses’ back to the army –  we ladies know how to cook, scrub floors, and sooth a fevered brow.”

Eventually, by their efficiently and good intentions, the nurses gained the approval, acceptance, and admiration of the surgeons.

With the sick or injured soldiers, however, the nurses had “unconditional surrender” and acceptance from Day 1. The patients were grateful for the sincere sympathy, unceasing care, and good sense that the ladies brought to the medical scene. They tended to side with the nurses in the wars with the doctors. Remember, in pre-war days, that soldier lad would’ve been cared for at home by his mother or sister. Thus, a woman’s presence at the bedside of a sick soldier was reassuring and comforting.

Various Roles and Location of “Nursing”

Clara Barton is probably one of the best known Civil War nurses. And since she rushed into battle zones to help wounded soldiers, we have this idea that’s what all Civil War nurses did. Well, that isn’t true…

There were battlefield nurses, certainly. They volunteered at field hospitals, near or on battlefields.

There were hospital nurses who worked in permanently established hospitals, usually in a large city. Louisa May Alcott (Union) and Phoebe Pember (Confederate) are good examples.

Then there were ladies who may not have been directly involved in bandaging wounds, but who played a very active role in caring for the soldiers. Indeed, without them, the soldiers might have starved to death or laid in filthy bedsheets. These ladies were hospital matrons – they oversaw (or did) the cooking and cleaning for a hospital. Frequently, approaching their work as though running and oversized household, the hospital matrons were amazing organizers.

In reality, many ladies performed all three “nurse” roles at some point in their war experiences. It was not always separate as in my explanation.

Overcoming so many challenges just to be in a hospital, it would seem that once there (and having acquired the surgeon’s respect) a lady’s job as nurse would be easy, right? Wrong.

A nurse or hospital matron was constantly in contact with suffering and tragedy. She watched or assisted in surgical operations. She experienced a pang of fear mixed with joy when a patient was well and reported back to the army. She wrote death-bed letters for patients. She held the dying soldier to ease his agony.

Of all the challenges facing a hospital nurse, the greatest struggle was the battle for self-control and emotional strength.

Detail from a sketch by the U.S. Sanitary Commission

Many found their faith kept up their courage, and some shared Christian truth and hope with the sick and dying. It was good and noble to care for a wounded soldier, but how much more satisfying to share the hope of salvation. These nurses found that this evangelism gave them an important purpose…a higher calling.

The ladies who traveled to hospitals to work as nurses or hospital matrons faced conflict at every step. However, they were determined to make a difference and persevered to carry out a woman’s traditional task of medical nursing in a more unconventional setting. They brought a motherly or sisterly touch to a stark, frightening hospital ward or battlefield tent, and their care and compassion undoubtedly saved many lives.

P.S. Sadly, I can only present an overview and summary today on a subject that could fill a whole library…

If you would like to see an entire month’s blog series devoted to Nurses of the American Civil War, leave me a comment and I’ll see what can be worked into the schedule!

3 thoughts on “Nurses of the American Civil War (An Overview)”