Two Union commanders who are briefly mentioned in “Blue, Gray & Crimson” are General Oliver Howard and General Winfield Scott Hancock. They were almost the exact opposites, but their leadership styles were precisely what was needed at certain moments during the Battle of Gettysburg. 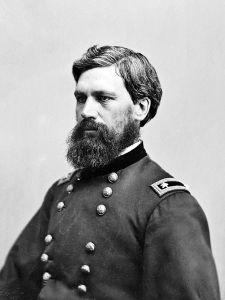 Academic and religious, Oliver Howard attended Bowdoin College (Maine) before his appointment to West Point and the beginning of his military service. He graduated West Point in 1854 and spent several years teaching mathematics at the academy.

The Civil War was a test of character for Howard, and – to put it mildly – his battlefield success record was pretty much nonexistent. He was badly wounded in 1862 and lost his right arm, but he recovered and returned to active service. One of the fascinating things about this general is his commitment to actively living and proclaiming his Christian faith to his officers and men; Howard didn’t use profanity, didn’t tolerate drinking, and faithfully distributed religious tracts to his soldiers.

Howard arrived at Gettysburg a little before noon on July 1st and was the senior commander until shortly after four. Unfortunately, during that time, his corps (XI Union Corps) and the other units in the field broke lines under attack and retreated… 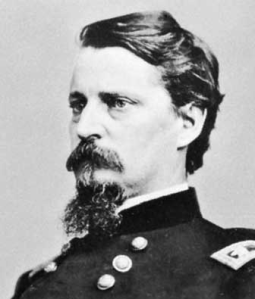 Bold, profanely outspoken, and dashing, Winfield S. Hancock was a West Point graduate and veteran of the Mexican War, Indian Wars, and minor western conflicts by the time the Civil War came. Entering the war late because he had to travel back from California, Hancock moved fairly quickly through the ranks and commanded a corps by November 1862.

Disgusted with the military failures at Antietam, Fredericksburg, and Chancellorsville, Hancock was quick to offer advice to the commanding general who usually ignored him. After-all a West Pointer and experienced fighter, couldn’t know more than a political general, could he? (Sarcasm) But Hancock watched and waited…he supported the appoint of George Meade as commander of the Army of the Potomac in the middle of the Gettysburg Campaign. Meade trusted Hancock and asked and listened to his advice.

On July 1st as rumors of the fighting near Gettysburg drifted back to Union headquarters which was still in Maryland, Meade needed to send someone to control the field. Meade couldn’t go at that time – there was too much to do sending marching orders and trying to figure out exactly where the army corps were. General Hancock was Meade’s choice – he was sent to Gettysburg to assess the situation and command the battlefield until Meade arrived. Hancock would be taking the command from Howard…

Contrary to popular belief, there is rarely consensus on the precise time and even the details of events on battlefields. But we shall reconstruct it as best we can…

Around 4pm the Union lines break and troops flee toward Cemetery Hill. Howard meets them, grabs a Union battleflag with his left hand and begins to rally the soldiers. He convinces them to re-organize and start digging trenches to strengthen the high ground position.

Sometime after the breaking of the Union lines, General Hancock – Meade’s representative – arrives and is understandably horrified at the condition of the army. Some soldiers recorded a confrontation between Howard and Hancock, in which Howard refused to  give up battlefield command. Other observers claim there was no argument and the generals worked together with no tension.

The truth is probably somewhere in between. Likely, Howard’s quieter, purer encouragement heartened the troops while Hancock’s energy guaranteed that the Union would hold all the high ground at Gettysburg.

It is sometimes argued that Gettysburg was Hancock’s battle, and to some extent it was. He had the final say on the battleground on the night of July 1st. He dashed around finding reinforcements on July 2nd and saved the Union line from collapse. Hancock’s corps met Pickett’s Charge on July 3rd, and he was severely wounded in the fighting.

Yet, I would argue that Howard played a significant role at Gettysburg too. His corps – although frequently dishonored by historians for their retreat on Day 1 – managed to hold their position on Cemetery Hill against some ferocious attacks. If Howard’s line had collapsed on Day 2, the Union would’ve lost Gettysburg.

Howard was quietly sincere and caring, but he never shied from battle and was a courageous planner. At Gettysburg, Howard was the anvil; he stopped the retreat and started a new defensive line which held for two days of fierce fighting. You can’t move an anvil easily – the Confederates couldn’t move Howard a second time.

Hancock was boldly energetic with a charismatic flair, but he was also efficient and no-nonsense. At Gettysburg, Hancock was the hammer – always on the move, always striking back just when the iron was hot.

In a blacksmith shop, an anvil can’t shape metal on its own. Neither can a hammer pound hot metal into shape without something solid beneath. These two Union generals were like the anvil and hammer – without the other’s effort and leadership neither could have been successful. And if they had not been successful, it is probable Gettysburg would not have had the outcome of decisive Union victory.