You know, sometimes we forget about the history in our “backyards.” I’ve spent this month sharing some history and great historical sites from my state – California. But I am always surprised at the vast amount of history (even local or state history) that I have yet to discover!

Earlier this month, my family took a short jaunt to the Los Angeles area for a vacation and we toured some excellent museums. I wanted to share these sites with my readers – if you live in Southern California be sure to check them out…and if you live out of state consider visiting our area to explore our history. We don’t have Gettysburg or Williamsburg…but we have the Battleship Iowa and a few Civil War sites of our own!

The Drum Barracks Named after Richard Coulter Drum (not the musical instrument), the Drum Barracks Museum is what remains of a large Civil War era military camp established to protect the Port of Los Angeles. The U.S. troops headquartered there guarded the location, the local citizens, and extended Union control into Arizona and New Mexico.

The structure still standing today was originally junior officers’ quarters and has been developed into a fine museum. We had an excellent tour guide who explained California’s complex role during the Civil War and the history of the area! So there – we do have plenty of Civil War history in California, including a historic site or two…

The Banning House Museum (a young lady and her brother kept getting the photographs!)

Banning House Museum Originally built in 1864, this home was the residence of Phineas Banning and his family. Mr. Banning came to California in 1851 and his entrepreneurial spirit contributed to his success. He advocated strongly for the local port to become a major commerce center and was influential in laying the paths for railway lines in California.

The home is beautifully preserved and many of the furnishings are original. Our tour guide was informative and helped us imagine what it must have been like to live in the “big house” in the days when its front porch view was unobstructed all the way to the ocean. In the “basement” of the house, there is a very nice museum with interactive displays detailing transportation and commerce in early California.

Looking up at the tower of Point Fermin Lighthouse

Point Fermin Lighthouse Established by the U.S. Lighthouse Board in 1874, this lighthouse guided ships toward San Pedro Harbor. The lighthouse epitomizes an ideal of Victorian lighthouse life, but our tour guide pointed out that the life was much more challenging and rugged than we might imagine from our modern perspective. The structure is well preserved and contains many 19th century artifacts, demonstrating life in that time period. The original lighthouse lens (Fresnel lens) is on display.

The guided tour takes visitors through the dwelling rooms and all the way up the tower into the lantern. (“Lantern” is the term used to describe the room where the light and lens originally sat.) The Point Fermin Lighthouse Society has done a marvelous job preserving their treasure and helping visitors appreciate its historic significance. 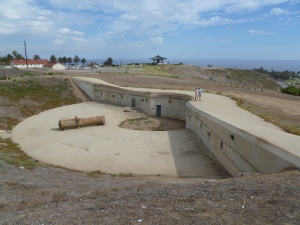 Some of the fortifications of Fort MacArthur

Fort MacArthur The exterior fort is located on the heights just above Point Fermin Lighthouse, while the underground tunnels run…who knows how far! Fort MacArthur was an active military post from 1914 to 1974, guarding the California coast and the commerce harbor of San Pedro. Concrete structures and gun platforms remain and the major entrances to the underground tunnels are visible. There is a nice display of historical items, highlighting the fort’s importance in national defense. I was particularly interested in the collection of World War II era newspapers, highlighting West Coast concerns.

Standing on the concrete walls or on the bluffs looking toward the sea, I considered the importance of this fort – this landmark – and the role it played in defending continental United States during World War II.

The Battleship Iowa While we’re on the World War II topic, meet the Battleship Iowa. She’s an Iowa class battleship and her name is Iowa too; how cool (and easy to remember) is that? See the huge forward guns which consumed about 660 pounds of gunpowder per shell fired, tour the officers’ quarters, learn about the history of ship from WWII through the Cold War, and marvel at the width of the steel plating on this American-built beauty.

A family friend who’s a battleship enthusiast took us on a tour of this mighty vessel and we had a marvelous time. A big “thank-you” and “you’re awesome” to the volunteers who are preserving and restoring this important piece of American history. 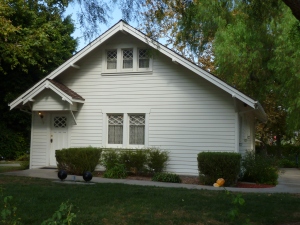 The Nixon Presidential Library and Museum Did you know the 37th President of the United States actually grew up in Yorba Linda, California? That’s right, and that’s where his presidential library and museum is located. Wander back in time in the exhibit halls and explore the life, politics, and legacy of Richard M. Nixon and his family. He was a gifted leader and I learned so much! In the gardens – on its original location – stands the home where Richard Nixon was born and where he grew up; a little farther on in the gardens is his Marine One helicopter.

I’m ashamed to say I had a very narrow minded view of former President Nixon. I’d always associated him with the Watergate Scandal and hadn’t taken a lot of time to learn more about him. It was such an unexpected pleasure to tour the museum and learn more about this man who did so much for America, especially in international diplomacy. In summary, I left with a new found respect and admiration for President Nixon.

So go exploring – there’s history all around you!

P.S. What are your favorite historic sites in California or your own home state?