What did the Gettysburg civilians actually think of Lincoln’s Gettysburg Address? How did they feel about the president coming to their town?

This blog post answers those questions by letting the spectators of the historic day “speak for themselves.” This post is a companion piece to last week’s article The Day of the Gettysburg Address.

And now, without further commentary, here are some primary source accounts from Gettysburg folks, recalling the famous event.

Abraham Lincoln, photograph taken in the spring of 1863

The President Is Coming!

“The fact that the President …was coming to town was quite sufficient to create the liveliest interest.” ~Henry Holloway

“We all wanted to see him, and my strongest wish was to shake hands with him.” ~Albertus McCreary

“Never in my life will I have the same opportunity of seeing so many of the great men of the nation again…” ~Josephine F. Roedel

“I saw Mr. Lincoln as he was about to start down the steps to the sidewalk. I was surprised and I might say awed by his great height, his black hair and beard, his dark complexion, his head covered with a tall silk hat. I thought he was the tallest man I had ever seen… On reaching the landing at the foot of the steps I had the honor, along with others, of shaking his hand.” ~W.C. Storrick

“I squeezed my way through the mass of people until I was about ten feet from the platform on which, of course, sat Mr. Lincoln…” ~Albertus McCreary

“I waited for Mr. Everett to get through his speech with what patience I could. It was long, I remember, but what he said made no lodgment in my mind; I was only waiting to hear Mr. Lincoln…” ~Albertus McCreary

“The suddenness with which he [Lincoln] closed [the speech] was almost startling. The end came when every ear was strained to catch each word.” ~Henry E. Jacobs 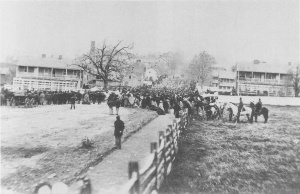 “To many of the listeners, the President’s few words were a temporary disappoint. They were not able on the instant to grasp their sublimity.” ~J. Howard Wert

“What the crowd thought…I do not know, but I do know what I thought. On coming away I said to a [college] classmate, ‘Well, Mr. Lincoln’s speech was simple, appropriate, and right to the point, but I don’t think there was anything remarkable about it.’ That was the opinion of a wise sophomore.” ~Philip M. Burke

“The great day is over and I am so glad I have been here. Everything passed off very pleasantly and scarcely one drunken man was to be seen. Such homage I never saw or imagined could be shown to any one person as the people bestow upon Lincoln. The very mention of his name brings forth shouts of applause. No doubt he will be the next President, even his enemies acknowledge him to be an honest man.” ~Josephine F. Roedel

“We pass over the silly remarks of the President; for the credit of the nation we are willing that the veil of oblivion shall be dropped over them and that they shall no more be repeated or thought of.” ~A Harrisburg Pennsylvania Newspaper

“The dedicatory remarks of President Lincon will live among the annals of man.” ~Chicago Tribune

“The little speech was not much spoken of at the time, but as the days and months passed by its merits became more in evidence.” ~Michael Colver

“Indeed, so great was that speech that no one at the time comprehended it fully.” ~Henry C. Holloway

The Gettysburg citizens were excited about Lincoln’s visit to Gettysburg, and many – especially children – were anxious to meet the president. However, it should be noted that there was definitely a mixed reaction to Lincoln’s speech; that address would gain fame in later years, but was not necessary recognized as “breathtaking” on November 19, 1863.

P.S. Do you have a favorite memory of hearing the Gettysburg Address used in a modern ceremony or presented by a living historian/famous person?

2 thoughts on “Gettysburg Civilians Reflect On The Gettysburg Address”