This guy is not wearing a military uniform. Civilian clothes!!!

I’ll admit if I was an internet search engine and you gave me the keywords “Civil War man”, I’d probably send you a bunch of photos, paintings, and sketches of soldiers. It’s just what we tend to think of. You know, war equals soldiers.

Okay, but certainly not every American man enlisted with an army. What did the civilian men wear? What were the Gettysburg men wearing? Well, let’s discuss the basics. (I’ll be honest and admit I’m not expert on the precise patterns for waistcoats and etc., but I’ll tell you what I do know.)

Practical clothing was key during the mid-19th century. A person had to be able to perform their work in the clothes they wore. So you weren’t going to find a middle class farmer  ploughing his muddy fields in a fine waistcoat, wool coat and pants, and silk necktie…but the middle class lawyer might have worn that when he represented his client in court.

The Basics of Men’s Clothing

A good photo of a gentleman wearing Civil War era reproduction clothing: shirt, vest, hat, dark trousers. It was a really hot day when this photo was taken, so the gentleman is relaxing without his coat.

Vests (Waistcoats) – There were plain, practical vests that a farmer or tradesman might have worn. Then there were the fancy waistcoats worn by wealthier gentlemen.

Coats – Again, plain and practical verses fancy status symbol. Coats were tailored and could be buttoned closed in the front. Coattails extended beyond the waist, but the cutaway fronts popular earlier in the century were not in vogue.

Trousers – there were different styles of course, but the regular two-legged, long pants were standard. Buttons instead of zippers, though, and cording in the back helped with sizing to fit the waist; suspenders (or sometimes belts) also helped to keep the trousers fitting properly. (Underpants – typically called “drawers” – were often worn.)

Shoes – footgear was made of leather (unless we’re talking about house slippers). Boots or tied shoes came in different styles…for many different purposes.

They say a picture’s worth a thousand words, so let’s see if these help: 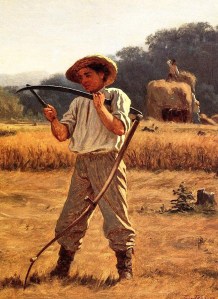 A hard-working farmer is dressed casually while working in the fields. (I particularly like the straw hat.)

This fellow is wearing some nicer clothing. Notice the waistcoat, watch-chain, and hat.

Again a “properly dressed” gentleman. Notice the cravat and waistcoat. He is holding his gloves and a gentleman’s cane – this guy does not work in the fields and he’s dressed to impress.

Did the pictures help? Hopefully! Now, you know the basics of men’s clothing during the 1860’s.

(Oh, and this knowledge actually makes understanding blue and gray uniforms easier! Don’t believe there’s anything beyond the basics of a blue or gray coat? Stay tuned next Tuesday…)

3 thoughts on “You Mean They Didn’t All Wear Uniforms?”