Who wrote the classic novel Little Women? If you said “Louisa May Alcott.” You’re correct!

Who volunteered as a nurse at a Union hospital in Washington D.C. –  “I haven’t the slightest idea…” Wait, I wasn’t finished with the question! (Don’t be so impatient, now.)

Let’s try again – Who volunteered as a nurse at a Union hospital in Washington D.C., worked hard and cheerfully, but became deathly ill and had to go home…and later wrote about her experiences in Hospital Sketches?

Louisa May Alcott is the correct answer. Let’s learn a little more about this remarkable writer and nurse and her role during the American Civil War.

Before She Was Famous

In 1862 – the year she volunteered as a nurse – Louisa May Alcott was thirty years of age. She would never marry, and, by the standards of that era, was already considered an “old maid.” Louisa spent much of her youth in Concord, Massachusetts, where she and her family associated with some of the famous “thinkers” of the early 19th Century. (As a note, just because they were famous doesn’t mean they had Biblically based ideas – Christians should be aware that Miss Alcott’s writing is often influenced by the transcendentalist and universalism philosophies.)

She and her family actively assisted in the Underground Railroad and strongly believed in abolition. Louisa spent time teaching school, writing for the Atlantic Monthly, loved reading literature, and looked for a purpose for her life. Her interlude as a hospital nurse preceded her literary fame. Little Women was published in 1868; though not her first novel, it was the story which launched Louisa’s success in the literary field.

If you like the writing style of Little Women, you would probably enjoy Louisa’s view of the medical field during the Civil War. Full of humor and pathos, it tells a very human story. (You can find the entire book available for free HERE)

Unlike Clara Barton who went directly to the battlefields, Louisa took a more traditional role, volunteering as a nurse at a “base hospital” in a large city. She actually worked at Union Hospital in Georgetown, near Washington D.C. in late 1862 and early 1863.

In Hospital Sketches, Louisa calls herself Nurse Tribulation (probably a respectful literary nod to John Bunyan and Pilgrim’s Progress) and changes the names of her patients and other medical staff. Here are a few excerpts, highlighting Louisa’s role as a nurse and her contributions to the war effort during her six weeks of service… 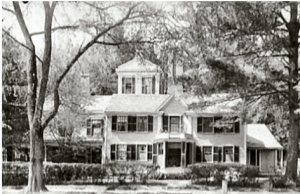 One of the Alcott Family’s homes in Concord, Massachusetts

“I want something to do.” This remark being addressed to the world in general, no one in particular felt it their duty to reply; so I repeated it to the smaller world about me, received the following suggestions, and settled the matter by ansering my own inquiry, as people are apt to do when very much in earnest…

[She meets a nurse with friends and connections in Washington and…] I felt that I could do the work, was offered a place, and accepted it, promising not to desert, but stand ready to march on Washington at an hour’s notice…

[Preparations are made; trunks are packed, and after much running around town and general criticism of men, she finds herself on a train to Washington. Later, she fears drowning on the boat, but arrives safely and is taken to the hospital where she is to report]

A Day at the Hospital

“Who have come? The rebels?”

This sudden summons in the gray dawn was somewhat startling to a [beginning] nurse like myself, and, as the thundering knock came at our door, I sprang up in my bed…but my room-mate took it more coolly… “Bless you…it’s the wounded from Fredericksburg; forty ambulances are at the door, and we shall have our hands full in fifteen minutes.”

“What shall we have to do?”

“Wash, dress, feed, warm and nurse them for the next three months, I dare say. Eighty beds are ready, and we were getting impatient for the men to come. Now you will begin to see hospital life in earnest, for you won’t probably find time to sit down all day, and may think yourself fortunate if you get to bed by midnight…”

I am free to confess that I had a realizing sense of the fact that my hospital bed was not a bed of roses just them, or the prospect before me one of unmingled rapture…”

“Having done up our human wash, and laid it out to dry, the second syllable of our version of the word war-fare was enacted with much success. Great trays of bread, meat, soup, coffee appeared; and both nurses and attendants turned waiters, serving bountiful rations to all who could eat…

“All having eaten, drank, and rested, the surgeons began their rounds; and I took my first lesson in the art of dressing wounds. It wasn’t a festive scene, by any means; for Dr. P., whose Aid I constituted myself, fell to work with a vigor which soon convinced me that I was a weaker vessel, though nothing would have induced me to confess it then…”

[The day concludes with another meal]

As time goes on the Miss Tribulation (a.k.a. Louisa May Alcott) becomes a skilled nurse. She takes over the “night watch” and looks after the sleeping wounded. She writes letters and soothes the dying.

Eventually, exhausted and ill, she is forced to rest by the other medical staff. Louisa developed typhoid fever and became so ill that her father came to take her home.

Let no one who sincerely desires to help the work on in this way [nursing], delay going through any fear; for the worth of life lies in the experiences that fill it, and this is one which cannot be forgotten. All that is best and bravest in the hearts of men and women, comes out in scenes like these; and, though a hospital is a rough school, its lessons are both stern and alutary; and the humblest of pupils there, in proportion to his faithfulness, learns a deeper faith in God and in himself. I, for one, would return tomorrow…if I could…

Louisa May Alcott’s account was written for publication, but yet it avoids false patriotism and a rose-colored view of the medical situation. She honestly details the trials and victories that nurses endured in the Civil War hospitals. Reading her account is almost like being there, feeling the shock, the affection, the caring attitudes.

Louisa’s experience as a Civil War nurse was very short – just six weeks – but she made a difference in the hospital where she volunteered and she left a remarkable account of a nurse’s role in a Union hospital.

P.S. Have you read the complete collection Hospital Sketches – what part was most memorable to you?

3 thoughts on “Author & Nurse: The Woman Who Wrote “Hospital Sketches””