Rock Creek is a stream to the east of the town of Gettysburg. Reading historical accounts sometimes leaves a researcher with the impression that Rock Creek was omnipresent. (It’s not, it just happens to meander all over the east part of the battlefield zone.)

A tributary to the larger Monocacy River, Rock Creek became a semi-important landmark and high-dangerous enemy during July 1863. From peaceful stream to battlefield landmark to dangerous floodwaters, let’s explore some historical details of Rock Creek and how it was incorporated into my recent historical novel. 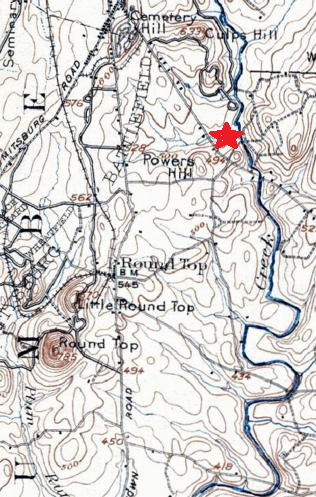 This map gives an idea of Rock Creek’s winding path east of Gettysburg. I’ve marked the approximate location of the Westmore’s home with a red star.

Rock Creek flowed through the Pennsylvania landscape and across farmers’ property. Though most farms had wells, the creek could’ve been used for water for livestock or people in times of emergency.

More frequently though, the creek was likely the setting for fishing trips or a destination for picnic groups, seeking less frequented spots. Children would’ve gone wading in the shallows, and the boys probably snuck away from summer chores for water fights and swimming.

Rock Creek had a strong current and was deep enough in some parts for James McAllister to build a mill dam and using the water power to turn the wheel of his grain mill.

“And then we crossed a creek…” Okay, that’s not an exactly quote from a source, but it’s an example of what is sometimes found in journals or battle reports. Not real specific, huh? Well, in the battle scenes at and around Culp’s Hill, the creek crossed by the Confederate attackers was Rock Creek.

And a little farther southeast – around a few watery twists and turns – Confederate snipers and Union regiments skirmished with the creek between them.

I don’t want to get overly graphic in this blog post, but here’s the simple fact. There wasn’t clean water in the Gettysburg area after the battle.

Dead soldiers. Dead animals. Blood. Armies of thousands in an area not equipped with modern sanitary conveniences. Got the idea? The water purity in the streams and most of the springs was quickly ruined. Rock Creek was especially bad since it ran through the eastern part of the battlefield, through field hospital locations, and in the supply area of the Union army.

A field hospital photograph (though not taken at Gettysburg) gives an idea of the chaos which would occur if this scene was flooded by a creek.

In the days following the battle, there were heavy rainstorms. The rain did help to cleanse the battlefield, but it also created flooding and a physical nightmare.

It wasn’t uncommon to establish field hospitals near water sources (obvious reasons), and accordingly there were quite a few Union field hospitals in the vicinity of Rock Creek in the area south of the Westmore’s home – see the map above.

One field hospital belonging to the Union II Corps was flooded by Rock Creek. The wounded were lying in the water, struggling to avoid drowning. Sadly, a few injured men were swept away in the flooded creek and undoubtedly perished.

The details in Blue, Gray & Crimson of Betsy’s journey to Rock Creek in search of water were a little challenging to write. Part of the problem was I’d never been to Rock Creek. We must have crossed over it on a small bridge when my family went to Gettysburg years ago, but to hike off the well-beaten path in search of a wandering stream wasn’t on my list of things to do at that time. (Oops!)

So I was at a disadvantage when it came to describing the appearance of Rock Creek just to the southeast of Culp’s Hill. But I got lucky – a fortunate person who gets to hike all over Gettysburg battlefield posted some pictures. (CLICK HERE to view them – scroll to the very end of the page for photos of Rock Creek in the area of Culp’s Hill).

Armed with the historical facts I’d found and some photos to help me understand what Rock Creek looks like, I set to work: 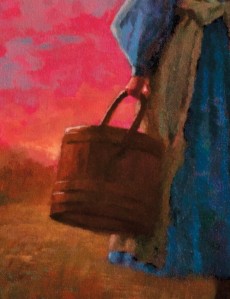 “Oh,” she said. We have to have water, she thought. Water for cooking, drinking, cleaning and re-bandaging wounds. We have to find more water. I know, Rock Creek. With all the rain there will be more than enough water there.

Too tired to run, Betsy trekked determinedly toward the southeast, taking a path near the somehow un-ruined field beyond the barn and garden. The light of morning grew stronger, and the sky turned gray. Hurriedly, she entered the woods; the creek was not far ahead.

She recoiled, horrified. Even in the dim light, she could see the creek water had a slightly reddish hue. Rock Creek was contaminated. They could not get water here. Afraid of what else she might see, she ran the opposite direction. (Blue, Gray & Crimson, page 156)

Sometimes landmarks – hills, streams, and valleys – are an intriguing part of history. Rock Creek was a blessing, obstacle, and enemy at different points in Gettysburg history.

One thought on “By The Banks Of Rock Creek”