When my family went to Gettysburg, we had an awesome tour guide who took us all over the battlefield, told us history stories, and pointed out important landmarks and monuments. After the tour, it was time to hunt through the gift-shop for a new book! (I got my copy of Bayonet Forward by Joshua L. Chamberlain there.) 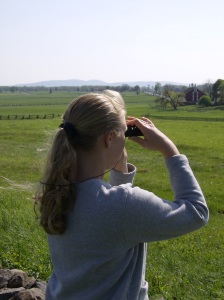 I suppose our experience at Gettysburg was similar to what many families and tourists do, but imagine my surprise to learn that people were doing this just days after the battle ended. Today, I’d like to introduce you to the Relic Hunters and Tour Guides of 1863.

Why Did They Come?

In the days following the Battle of Gettysburg, the land wasn’t a pristine military park. Far from it! It was field hospitals and ruined farms. And then…there was that problem: dead soldiers.

But human nature seems to have a fascination with the morbid, strange, and ugly. People actually traveled to Gettysburg in the weeks immediately following the battle to look around. They wandered over the fields, gawking at the awful sights and peering into field hospitals. If they could pick up a “souvenir” or two all the better; Confederate pistols were especially prized.

(Let’s make something clear, there were quite a few people who came to Gettysburg with the intent of helping relieve the disaster situation and I’ve written about them before: USSC, USCC, Miss Woolsey. There were widows and other grieving family members who came trying to find their loved one’s grave. I mean no disrespect to these people. This article is broadly addressing the “tourism” at Gettysburg in 1863.)

The more gruesome it was, the more impressive. Blood stained bullets, buttons, and even more macabre trophies were taken from the battlefield. Artillery shells – the unexploded ones, of course – were particularly cherished.

Gettysburg civilian lads quickly figured out they could make some money. They started collecting bullets, shell fragments, pieces of wood with embedded projectiles, and unexploded artillery shells to sell to the tourists.

This type of relic hunting was dangerous. Several boys and tourists were injured, and some were killed as they tried to explode “live” artillery shells. Others were accidently shot with weapons they hadn’t realized were loaded. Not only was playing with weaponry deadly, it was also…

All military accoutrements – weapons, uniforms, canteens, haversacks, blankets (and anything else a soldier took into battle that was issued by the army) was property of the United States Government. And the government wasn’t excited about “tourists” taking these items to decorate their parlors.

Military personnel worked to gather “the debris of war”, but they faced a serious problem of “innocent tourist” and intentional theft. Notices were posted around the town of Gettysburg announcing that no items were supposed to be taken from the battle area. But that didn’t prevent unscrupulous men from traveling to Gettysburg in wagons and loading up rifles at night, intending to sell the weapons back to the government or in the illegal market.

Finally, the provost marshal and his guards cracked down the discipline. If a tourist was caught taking military supplies from the field, he might be assigned to spend a day with the grave-diggers to pay for his attempted crime…and even a pompous New York judge was not exempted from this sentence.

Whether they came as tourists, reporters, historians, or grieving family members, people wanted to know about the Battle of Gettysburg. It was one of the few battlefields actually accessible to the Northern public, and they wanted to know what happened.

Again, civilian boys of Gettysburg were willing tour guides, even if they weren’t the most knowledgeable. Other civilians who were better informed also volunteered their “expertise” – for example, Edward Everett came to Gettysburg to learn about the battle he was supposed to talk about from a civilian gentleman who took time to explain the historical happenings.

From the earliest days after the battle and into the modern era, Gettysburg has attracted the curious and the sincere. For better or worse, tourism has been apart of the community since July 1863. Battlefield guides, storytelling, and bullet relic selling became a way for some of the Gettysburg civilians to have a part in telling the story of their past.

P.S. Do NOT go relic hunting at Gettysburg National Military Park (or any other national park or historic site). Just like in the days after the battle, it’s strictly prohibited! If you want a bullet to impress your friends, please buy a reproduction or an original for sale from a reputable seller.