Last autumn I asked the recipients of my email newsletter if there were any particular historical topics they want featured for a month on here on Gazette665. We’ve already fulfilled the request for a series on nurses during the America Civil War (see January’s archive).

This month we are featuring another requested topic. The Buffalo Soldiers: Guarding The West. When I first saw the request for this subject, I was both excited and a little nervous. I didn’t know much about these American soldiers, but it sounded like a great idea to learn more! 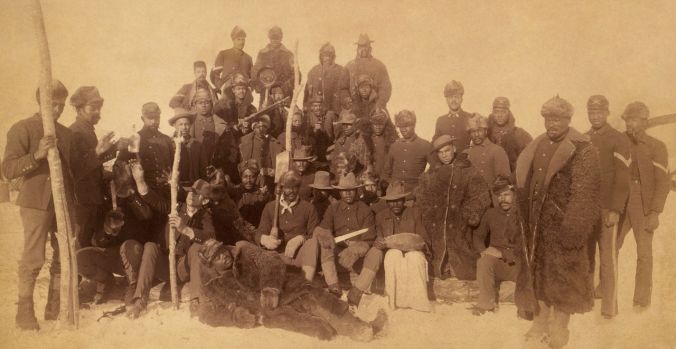 So come learn with me…every Friday in this month we’ll have an article on something related to these courageous soldiers. This week we’ll start with an introduction –

Who Were The Buffalo Soldiers?

The 9th and 10th U.S. Cavalry Regiments were African American units formed in 1866. The regiments received the name “Buffalo Soldiers” from the Native Americans and decided to adopt the name as a badge of honor since a buffalo was a revered and noble animal to the native peoples of the Great Plains.

Augustus Walley, a former slave, served with the Buffalo Soldiers and won a Medal of Honor.

Echoes From The Civil War

The American Civil War and the 13th Amendment to the Constitution ended slavery in America. The conflict also allowed African American men to official enlist in United State military regiments and these units were called United States Colored Troops (USCT).

The Civil War was certainly not the first time in American history when African Americans had served in military units. In every conflict, they had played important roles, often serving alongside white soldiers or sailors. However, the Civil War was the first time entire regiments of African American volunteers were formed. These units served with pride and distinction throughout the later part of the conflict.

Though the Civil War ended in 1865, many of the USCT regiments’ enlistment periods were not completed at the time, so they were sent to serve as a military presences along the Texas / Mexico border or in the Southern states as reconstruction began.

On July 28, 1866, Congress approved the formal enlistment of African American soldiers in the peacetime (standing) army. Four infantry units and the 9th and 10th Cavalry were formed immediately.

The 9th and 10th U.S. Cavalry – better known as “Buffalo Soldiers” (and since that is a term of honor we will use it!) played a major role in the west. They helped establish law and order in unruly western towns, protected railroads and stagecoaches, scouted, and guarded the settlers.

Things In 20’s To Remember

Beginning in 1866, the Buffalo soldier regiments served continuously for 20 years in the West. (Their service continued longer, but was not necessarily continuous.)

The Buffalo Soldiers were 20% of all United States Cavalry serving in the western states.

20 soldiers of the 9th and 10th Cavalry would eventually receive the Congressional Medal of Honor. 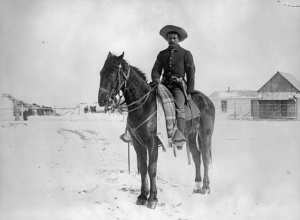 The enlisted men of the Buffalo Soldier units were hard-working, adventurous, and brave. In a society which was not always accepting of free African Americans, they made a respected name for themselves. The regiments were known for having the least disciplinary problems and were called in to save white regiments on several occasions.

Sadly, the knowledge of their bravely and reliability often did not win them social equality. The Buffalo Soldiers routinely received bad equipment and rations which had been rejected by white units. In winter quarters, they were frequently not allowed to associate on friendly terms in the towns and forts they defended.

The Buffalo Soldier regiments had white officers, and, for the most part, these officers respected their men and treated them fairly. The officers wrote about the courage of their soldiers and frequently appealed for equality of treatment.

The Buffalo Soldiers are an important (and often forgotten) part of American history. By formally enlisting and serving with the U.S. Cavalry, these brave men found a way to serve their country and fight for equality by winning respect. They guarded the frontier lands and performed many jobs with skill and responsibility.

I am looking forward to sharing more about these units and am so glad this topic was requested!

2 thoughts on “Buffalo Soldiers: Guarding The West – An Introduction”