I’m a little ashamed to say that the first thing I usually think of when I drive down General Kearney Street is “Yeah, he was the general who lost the Battle of San Pasqual.” While that is true, I’ve enjoyed learning more about this American military man and his role in the Mexican-American War and the settlement of the Southwest. So…now I’ll have some more positive thing to review as I’m driving on this “country” road.

Born on August 30, 1794, Stephen W. Kearny was privileged to obtain a good education in both public schools and a university before he joined the New York Militia in 1812. After serving as a First Lieutenant during the War of 1812 (really fought between 1812-1814) with Britain, Kearny stayed in the military.

He explored the regions of modern-day Montana, Wyoming, and Nebraska, keeping detailed diaries of his observations and experiences. Appointed to the commander post at Jefferson Barracks, near St. Louis, Missouri, Kearny started socializing with the city folks and associated with the Clark Family. (William Clark had co-led the first American expedition of exploration in the west in 1804-1806). Kearny eventually married one of William Clark’s stepdaughters; five of their eleven children lived to adulthood.

Nicknamed the “Father of the United States Cavalry”, Kearny helped to organize and lead the 1st Dragoon Regiment (later called the 1st U.S. Cavalry). By 1836, he was the colonel of the regiment, stationed at Fort Leavenworth, Kansas, and trying to keep the peace and protect the wagon trains on the plains.

Promoted to brigadier general and commanding the Army of the West, Kearny headed farther west. The U.S. was embroiled in the Mexican War – it was a conflict with multiple causes, and a chief one was America’s desire for expansion in the “Manifest Destiny” ideas.

Kearny easily pushed the Mexican forces out the territory of modern-day New Mexico, and working with an acting civilian governor, he secured the land and left a portion of his army there. Further dividing his army and sending units to El Paso, Kearny set off with about a third of his command (300 men) and headed for California. It was the end of September 1846.

On the trail-blazing route to California, Kearny met the explorer and guide Kit Carson. Carson was returning from California and reported that American troops controlled the Mexican province. Deciding he wouldn’t have any conflicts, Kearny kept 100 men with him and sent the rest back to Santa Fe. He also requested Carson to guide him to California.

However, while heading to San Diego through the Colorado Desert, Kearny met another American group who informed him of a Californio revolt in the Los Angeles area. Apparently, the region wasn’t quite as peaceful as he once believed.

December 6, 1846. Kearny and his hundred men had exhausted mules, wet powder, and useless pistols. And approximately 150 Californio Lancers were waiting for them.

The Battle of San Pasqual was disastrous for the Americans.  With about 18 men killed and many more wounded, they retreated to nearby high ground…and got surrounded. Though slightly wounded in the battle, Kearny retained command, decided to stay with his men, and asked Kit Carson to sneak through the Californio’s lines. If Carson could get through, he could go to San Diego and bring American reinforcements.

Carson accomplished his mission, and, with the help of the sailors and marines, the Americans drove back the Californios.

By January 1847, southern California and the town of the Los Angeles were again in American hands. The Californios surrendered and the Treaty of Cahuenga ended the war’s fighting in California.

Since Kearny was technically the highest ranking officer in California, he took over the post of military governor and served in the position from January to August 1847. He coordinated necessarily military duties in the new territory and arrival of new reinforcements. When he was transferred back to the east, Kearny was given a hero’s welcome. 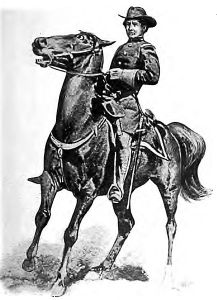 Appointed military governor of Veracruz and then Mexico City, Kearny travelled to Mexico and fulfilled the occupation duties for the U.S. Army. He got a brevet promotion to major general in September 1848, just one month before his death which was caused by yellow fever.

P.S. Any other U.S. military commanders in the California conflict of 1846 that are particularly interesting to you?