…After leaving Philadelphia I received intimation that our passage through the city of Baltimore would be resisted. I caused ammunition to be distribution and arms loaded, and went personally through the cars, and issued the following order, viz:

The regiment will march through Baltimore in column of sections, arms at will. You will undoubtedly be insulted, abused, and, perhaps, assaulted, to which you must pay no attention whatever, but march with your faces square to the front, and pay no attention to the mob, even if they throw stones, bricks, or other missiles; but if you are fired upon and any one of you is hit, your officers will order you to fire. Do not fire into any promiscuous crowds, but select any man whom you may see aiming at you, and be sure you drop him.

Reaching Baltimore, horses were attached the instant that the locomotive was detached, and the cars were driven at a rapid pace across the city. After the cars containing seven companies had reached the Washington depot the track behind them was barricaded, and the cars containing the band and the following companies [Companies C, D, I, L]…were vacated, and they proceeded but a short distance before they were furiously attacked by a shower of missiles, which came faster as they advanced. They increased their steps to double-quick, which seemed to infuriate the mob, as it evidently impressed the mob with the idea that the soldiers dared not fire or had no ammunition, and pistol-shots were numerously fired into the ranks, and one soldier fell dead. The order “Fire” was given, and it was executed. In consequence, several of the mob fell, and the soldiers again advanced hastily. The mayor of Baltimore placed himself at the head of the column beside Captain Follansbee, and proceeded with them a short distance, assuring him that he would protect them, and begging him to let the men fire; but the mayor’s patience was soon exhausted, and he seized a musket from the hands of one of the men and killed a man therewith, and a policeman, who was in advance of the column, also shot a man with a revolver… 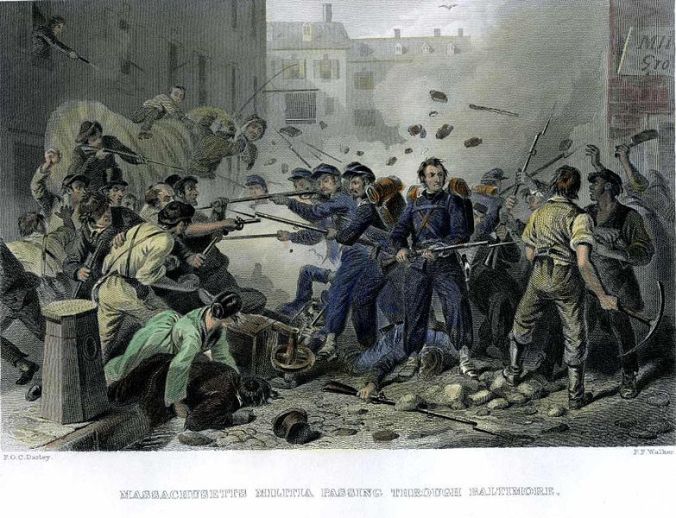 As the men went into the cars I caused the blinds to the cars to be closed, and took every precaution to prevent any shadow of offense to the people of Baltimore; but still the stones flew thick and fast into the train, and it was with the utmost difficulty that I could prevent the troops from leaving the cars and revenging the death of their comrades. 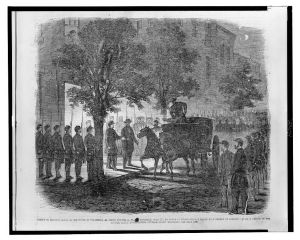 Baltimore was a hot-bed of Southern sympathy…and it was the major railroad hub into the Washington D.C. Weeks earlier, Abraham Lincoln had snuck through the city at night to avoid an assassination plot on his journey to the capital. Throughout the war years, the entire state of Maryland teetered between staying in the Union or joining the Confederacy. Ultimately, the state stayed, but martial law and impingement of Constitutional rights bothered the citizens.

In 1861, some Baltimore citizens agitated for secession and bitter opposed the forming the pro-Union armies. The incident described by Colonel Jones took place on April 19, 1861. The police and the city mayor supported the troops. Four soldiers died and about thirty-six were wounded. Approximately twelve civilians were killed, and many were wounded.

In the aftermath, civilians were arrested and brought to trial for their role in the riot. The city officials begged Lincoln not to send more Union troops through Baltimore, but he had little choice; the city was the rail route. Eventually, martial law was set up in the city, and the trains brought troops to the city, they marched through, and boarded other trains to continue their journeys. 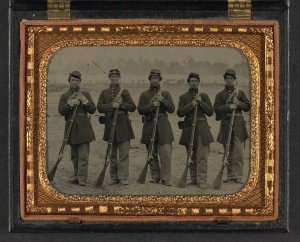 The regiment of militia was organized (not mustered into U.S. service) in January 1861. They spent weeks drilling and were provided with uniforms and rifles in March. One day after Lincoln’s call for troops on April 15th, the regiment assembled in Boston to begin their journey to Washington.

The unit had only a three month commitment of service and was relieved of duty on July 29, then mustered out on August 2, 1861.

The Baltimore Riot of 1861 was proclaimed to be the first time American blood was shed in the Civil War. While at first glance, it’s civilians against soldiers…perhaps we could still say it was civilians against civilians. After-all, the 6th Massachusetts was militia: citizen soldiers. They were not professional soldiers (very few Civil War soldiers were).

Another thought… The Baltimore Riot triggers the martial law and encroachment upon Constitutional rights for the citizens of Maryland. Certainly the civilians involved in the riot deserved judgment and some level of punishment for their actions. However, they managed to bring the Federal government against other civilians- possibly innocent – too. How much power should the Federal government take during a national crisis? Is it permissible to encroach on Constitutional rights for the perceived safety of the country?These are questions we are still debating in the historical and modern sense.

P.S. Do you think Colonel Jones adequately prepared and instructed his men for what they faced? 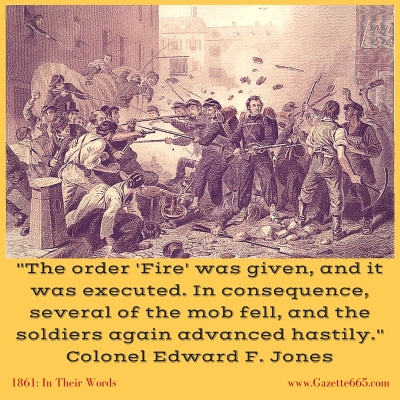