…I was interrupted and I have not been able to write another line since and I have missed the chance of the morning mail. It is now arriving, and alarms have great been given & our troops are moving in large bodies in two directions but I am sure it is a false alarm, and now as I write an office has just appeared & informs me it is so. A heavy rain is falling & our troops poor fellows are out in it.

My position here is very prominent. I only fear I cannot sustain myself, the duties are exceedingly heavy but of this say nothing. I am sure I have so far gained friends and reputation, I speak to you as I would speak to myself. Army officers are reporting to me for orders every day and I feel quite out of place. I do not know when or whether I shall at all receive an appointment as Adjutant General. I know that Col Jackson has written a very strong letter in my favour but it [is] a post which I fear I may fail in if appointed. Our force is being enlarged now greatly and as they come in my duties increase.

I think of you often & all the time my very dear Mother but you do not know how difficult it is for me to write a letter. I hardly know how to give any directions about home…

Please tell Sue [his wife] that no fields must be grazed on the home place but the one below the barn –  & the old Bald field. Has the water gate been fixed on the road? Have it done at once… I want the timothy field to be cut for hay. Bev writes me he has taken some hat & wants corn. He must get it elsewhere if possible as I have not a grain to spare…

…My sheep are not to be sheared yet, it is so important for me to be there, that if such a thing is possible I will Delay it. Good night my dear good Mother. Take care of my wife & my children. 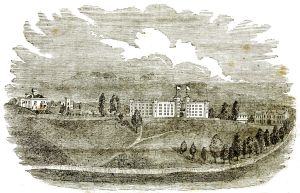 Jones had attended Virginia Military Institute; his extra military knowledge got him the temporary post of adjutant general at Harper’s Ferry. VMI buildings and parade ground are pictured in this engraving.

A resident of Virginia’s Shenandoah Valley and graduate of Virginia Military Institute, Francis [Frank] B. Jones was in his mid-thirties when the Civil War began. He decided to enlist and ended up at Harper’s Ferry, trying to organize the new recruits and fill the position of adjutant general for the new command. (Colonel Jackson in the letter will be promoted to general and receive the nickname “Stonewall.”)

When Frank left for war, he left his wife, Susan, and three children at home on his farm. Prior to marriage, Susan had lived in the city and wasn’t used to the farming routine. Frank expected the war to be very short; note that he plans to be home to shear the sheep. Letters that he writes later in the summer contain details for taking care of the sheep and overseeing other aspects of farming.

Unfortunately, his war experience lasted much longer…and he would never see the end of the war. The following year he would fight in the Valley Campaign, and shortly after Frank would die of infected wounds compounded by fatigue and illness.

Susan and Frank Jones (no known copyright restrictions on the photograph)

As the men enlisted, the homefront was created. Women and children were left behind. Susan Jones was not the only lady facing new and challenging experiences when her husband left home.

Suddenly, these homefront civilians had to learn new skill sets. They had to keep the family farm, industry, or business running because someday the war would be over and (hopefully) the men would be home and ready to continue with their pursuits.

Happily, Susan Jones met the challenge. With guidance from Frank’s directions in the letters and help from her extended family, she took over the management of the farm. In the autumn of 1861, Frank teases her, suggesting that he will asking her for advice on how to run the farm when he gets home.

One thing that particularly stands out in this letter excerpt is Frank’s belief that the war will be short. He advises them not to shear the sheep because he wants to do that when he gets home.

The majority of volunteer soldiers enlisting in 1861 thought the war would be over in 90 days…or after one big battle. They initial thought their military service would be a brief interlude and they would quickly return to their civilian lives.

In reality, the war’s fighting would last four years…and many would not go home.

P.S. There are some conflicting emotions in today’s letter excerpt. Anything that particularly stands out to you?