Your letters have both been received. I was much grieved at the sad tone of both. Of course we all deprecate war. But since the question of our existence as a nation seems to hang upon a thread, and in case a dissolution takes place war is inevitable. I say let it come when we are best prepared and when we have the national prestige and resources to back us…. What is our government good for if it cannot maintain itself. If the people are to rule in any locality they must do it by majorities. And if it those majorities are to be successfully set a defiance by [?] then the experiment of self-government is at an end. I say we have a greater cause for which to battle now than did our revolutionary sires. They fought against taxation without representation. We fight for the doctrine of self-government.

Acquiescence in the demands of the South would be next to disintegration of the whole nation. The irremediable disgrace of us all & a feeling of dispair [sic] in the breasts of freeman all over the globe. There is no knowing where the consequences of such a step would end. We should see European tragedies of state acted over on the American soil. What can be done to arrest this lava tide of woe? Nothing, but a firm resistance to rebellion can be save us…

But, I will not dwell longer upon a discussion of these wars. I have not much time to write now, but the tone of your letters grieved me so much that  felt I must write something immediately. I think you are too much concerned about me. I am very glad to have those who care for me, but I cannot bear to have their bosoms rent with anguish. If there could have been anything that would have deterred me from the course I have chosen it would be the thought of plunging my parents into affliction. I appreciate all you have done for me. I shall try to be a faithful steward of what you have bestowed upon me. Of course we none of us know the chances of war. I may return with honor and invigorated constitution. I hope by a prudent course so to do. Camp life thus far has been as easy for me as for any that are with me. We have had no camp, but rather a life in the barracks.

(Transcription and complete letter maybe be found in the Digital Archives/Special Collections at University of Washington.)

This letter by a Union officer is both a passionate reasoning with his parents and a concise defense of the American Experiment of Self-Government. What’s that mean?

When the Framers drafted the Constitution of the United States, the powers of Europe looked on, waiting for American liberty to fail and dissolve into anarchy or tyranny. Was a Constitutional government possible? they wondered. It was an experience in liberty and self-government.

Captain Squire argues that if the seceded states – the Confederacy – is allowed to exist, it will be a failure of the American experiment and his nation would collapse into petty wars and conflicts.

The Constitution of the United States of America, Page 1

Fighting For The Future

Captain Squire says he’s fighting for the future of his country. He fears the chaos that might begin if secession is allowed. He firmly believes in the Ideal of Union. He doesn’t want to see American divided.

His solution is not empty arguing. He says the only way to prevent the collapse of America’s Constitutional Government is war. The rebellion must be resisted – fought – in order to save the country and liberty for future generations.

Though addressing his parents grief and concern regarding his enlistment, Captain Squire remains firm that he must serve his country. He hopes to return, but it is implied that if he’s killed or maimed, he will not regret anything except the pain it might cause his parents.

Men on both sides during the Civil War felt strongly about the right of their cause. In many instances, both cited the U.S. Constitution. While modern debates on the validity of each view can last hours, days, or years, it is easy to get so caught in the right vs. wrong that we miss an important principle. Men were willing to stand up, fight, and die for something they believed in. Americans – as a whole – need to remember this.

I know there are many, many people serving our country; from my heart, I thank them for their service to preserve, protect, and defend our country and freedoms. But more Americans need to understand their responsibilities as citizens. What do you believe? What would you die to protect? Do you understand the principles of self-government?

P.S. Please read the letter again. I invite you to spend some extra time thinking about its meaning and how it can inspire you. If you’d like, share your thoughts in a comment. 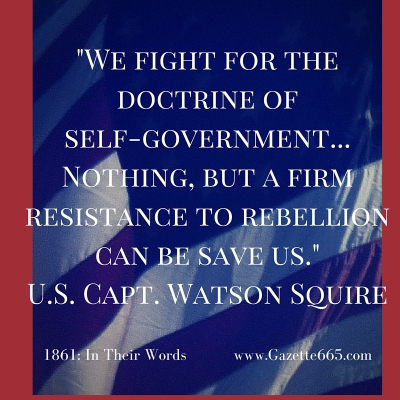