In our series “Battlefield Banners: Flags of the American Civil War” we’ve been exploring aspects of flag creation and the stories behind regimental flags. Today’s flag combines heraldic traditions from European heritage into an American setting. Carried by Irish immigrants, this flag made a statement of national origin, even as the soldiers fought for their adopted country.

Since Ancient Times people have used banners, emblems, and symbols to identify themselves nationally, locally, or individually. During the Middle Ages, heraldry evolved – a system of formally applying symbolic meaning to colors and symbols, creating unique “coat of arms” for individuals and families. As the feudal system broke down and Europe entered the Early Modern Period, the heraldic traditions transferred to national flags. 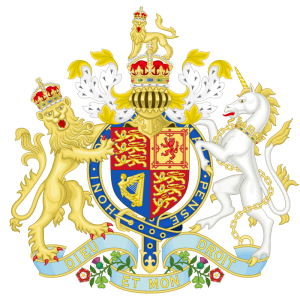 Coat of Arms of the United Kingdom during Queen Victorian’s reign (American Civil War era). Notice the harp on the lower left corner of the shield; that symbolized Ireland.

Describing the colors used on the American Seal and flag, one member of the Continental Congress wrote this: “The colors of the pales (the…stripes) are those used in the flag of the United States of America; White signifies purity and innocence, Red, hardiness & valour, and Blue, the color of the Chief (the broad band above the stripes) signifies vigilance, perseverance & justice.” (For more details, see USFlag.org) The details on the colors comes from heraldic tradition.

Flags during the Civil War used heraldic tradition. One set of flags is an especially good example, both in design and the battlefield recognition.

At the Battle of Fredericksburg (December 1862), a Confederate general used his field glasses to look across plain at the Union troops preparing to attack. “There are those (explicative deleted) green flags again.” Recognizing the flags carried by the Union Irish Brigade, the Southerner knew to expect a fierce fight.

The banners carried by the Irish Brigade were emerald green, reflecting the traditional color used by Catholic Ireland. Usually decorated with a harp – another heraldic symbol of Ireland – and other symbolic features from the original homeland, the flags were making a traditional and contemporary statement on the American battlefields.

By choosing to carrying unique flags, the Irish Brigade created a way for both friend and enemy to know they were on the field. They also ensured that they would be recognized as Irish-Americans, making it easier for them to win a positive reputation for their ethnic group. (For more details on the struggle for cultural recognition, please read “Gone For A Soldier: Journeys of Irish-American Music & Patriotism on Emerging Civil War Blog.)

The photograph below is one of the original green flags carried by a regiment in the Irish Brigade. It was presented to the 28th Massachusetts Infantry by General Meagher.

In 1861, the U.S. Secretary of War authorized the formation of an all-Irish brigade. General Thomas Francis Meagher – an Irish expatriate and exile, who had found refuge in America – was instrumental in suggesting the unit and recruiting the regiments; he became it’s battlefield leader during 1862. 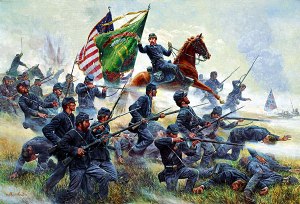 “Raise the Colors and Follow Me” by Mort Kunstler (No Copyright Infringement Intended) http://www.mortkunstler.com/html/art-limited-edition-prints.asp?action=view&ID=421&cat=136

The first regiments to form the brigade were the 63rd, 69th, and 88th New York Infantries and the 29th Massachusetts Infantry. The Massachusetts’s unit wasn’t composed of Irish and eventually requested the transfer; it was replaced with the 28th Massachusetts, which was formed predominately of Irish immigrants. Eventually the 116th Pennsylvania Infantry was also added, making a five regiment brigade.

The Irish Brigade fought at the Peninsular Campaign (1862), Seven Days Battles, Antietam, Fredericksburg, Chancellorsville, Gettysburg, Siege of Petersburg, and was present at the Confederate surrender at Appomattox Court House. The unit had a tenacious fighting record and was often sent on “impossible missions.” Though the brigade won respect and battlefield honor, it also suffered heavy casualties.

(For more details on unit and a discussion of the fight for citizenship, please refer to Gazette665’s post: The Irish Brigade.)

The green flags of the Irish Brigade became iconic battlefield emblems, creating fear in enemies and admiration in comrades. By designing a “stand-out” flag, the Irish Regiments were able to reflect their original national heritage through heraldic traditions. Ironically, their flag – designed to make a statement about Irish Nationalism – became an American symbol during the war, signifying the respect the immigrants were gaining in 19th Century society.

With a harp on their green flag, the Irish soldiers fought for their new country, for recognition as a people group, and for memories of their first homeland. Their green flags ensured their identity in the 1860’s and have been preserved to tell the story of Irish-American role during the Civil War.

P.S. FYI, there were Irish units fighting for the Confederacy too; they also liked to use harps and the color green on their flags. To avoid confusion, I choose to just focus on the most famous Irish unit from the Civil War: The Union Irish Brigade. Feel free to chime in with information or pictures about other Irish flags during the war.