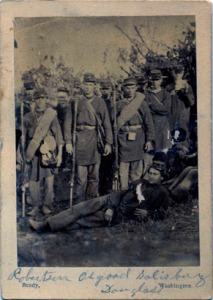 About two o’clock this morning we left “Bush Camp,” and marching down the hill, through Centreville, found the woods obstructed by wagons and troops that had failed to start on time. Soon the Second [Rhode Island Regiment] left the main road and struck off the right, through a wood path that had been much obstructed. As we led the Brigade the task of clearing the road fell to us, and hard work we found it.

About nine o’clock in the forenoon we reached Sudley church, and a distant gun startled us, but we did not realize that our first battle was so near at hand. We now took a side road that skirted a piece of woods and marched for some distance, the men amusing themselves with laughter and jokes, with occasional stops for berries.

On reaching a clearing separated from our left flank by a rail fence, we were saluted with a volley of musketry, which, however, was fired so high that all the bullets went over our heads. I remember that my first sensation was one of astonishment at the peculiar whirl of the bullets, and that the Regiment immediately laid down without waiting for orders. Colonel Slocum gave the command: “By the left flank – MARCH!” and we commenced crossing the field. One of our boys by the name of Webb fell of the fence and broke his bayonet. This caused some amusement, for even at this time we did not realize that we were about to engage in battle.

As we crossed the fence, the Rebels, after firing a few scattering shots, fled down a slope to the woods. We followed to the brow of the hill and opened fire. Our Battery came into position on our right and replied to the Rebel artillery which was sending their shell into our line.

On what followed I have very confused ideas. I remember that my smooth bore gun became so foul that I was obliged to strike the ramrod against a fence to force the cartridge home, and soon exchanged it for another. There was a hay stack in front of our line, and some of the boys sheltered themselves behind it. A shell from the enemy striking covered with the men with hay, from which they emerged and retook their places in line. About this time, Private Thomas Parker of Co. “D” captured a prisoner, a member of the Louisiana Tiger Regiment, and as he brought him back to the line was spoken to by Colonel Slocum…

The first large battle of the war was the First Battle of Bull Run (Manassas). Let’s stop right here and clarify a couple things. 1) It’s the “First Battle of Bull Run” because in 1862 there will be another battle fought in the same location. 2) Most Civil War battles have two names. Why? The Union named conflicts after the nearby water sources (rivers, creeks, bays, etc.) and the Confederates named battles after the nearby towns. So…Bull Run is the creek, and Manassas is the name of the local village. 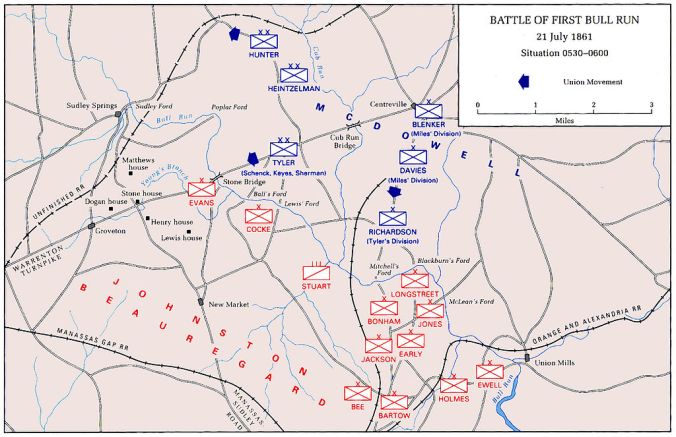 This battle (call it whatever you want) was fought on July 21, 1861. Basically, the Confederates had grabbed high ground around Manassas Junction (railroad) and were blocking the way to their capital which was now in Virginia’s capital city, Richmond. Lincoln and some of the generals were anxious to get the war finished, especially because those “90 day enlistments” of Union troops were going to expire…and it’s hard to win a war when there’s no army.

The Union began the fight with an elaborate flanking movement and early morning march toward the Confederate lines. (We’ll follow the rest of the story in the next couple weeks.)

War was an adventure! The Rebels would surrender without fighting when they saw the mighty Northern troops! Naïve ideas likes these filled the minds of Union soldiers. A battle was a remote possibility.

When they actually got into a combat situation for the first time (especially at the first battle) it was a serious shock.

One very noticeable thing in battle accounts by Civil War soldiers is their description and knowledge only. Corporal Rhodes doesn’t describe the overall battle strategy. He just writes about what he saw and knew. This is very important and something that historians and writers should keep in mind.

Yes, if you’re reading something written in the post-war era by a Civil War veteran, he will often include overall battle details in an attempt to help the readers. But, if you’re really reading a document, written right there on the day or during the week of the event, they’ll usually only write about their “little piece of the puzzle picture.” This is very noticeable in Rhode’s account.

P.S. What phrase stands out to you in this “battle description”? 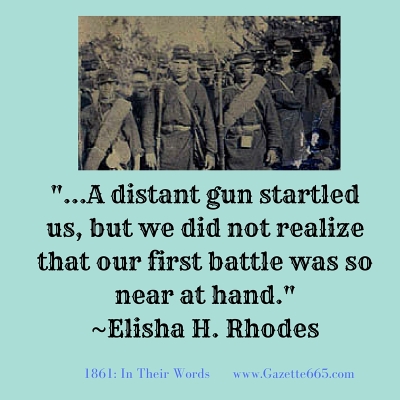