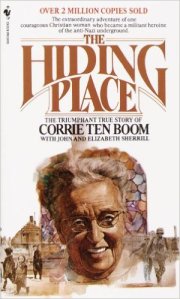 It’s not often that there’s a history book people can’t put down, but every person I’ve talked to who’s read this book has had the same positive response. Even folks who think they “don’t like history” devour the pages of this World War II primary source.

The book is by Corrie Ten Boom. Written post-war, it tells her story of helping Jews escape and find shelter from the Nazis, and what happened to her and her family when they were captured and imprisoned for their actions and faith.

Published in 1971 and with more than 2 million copies in print, The Hiding Place is a classic on the shelves of Holocaust history and persecuted faith. Beginning with childhood, the book details Corrie Ten Boom’s life and how she was prepared in her youth for the courageous actions and unyielding faith in the 1940’s.

The Ten Boom Family lived in Holland and owned a watch-shop. Mr. Ten Boom and his two middle-age, maiden daughters worked in the shop and kept the little crookedly built house neat and hospitable. When the Germans invaded and occupied Holland, the family adjusted to war rationing, curfews, and identity cards. But when their Jewish friends disappeared or whispered they were going into hiding, the Ten Boom family decided they had to live their Christian faith and help others in need.

They set up a hiding place in their home and organized a system of underground messages, helping many Jews to safety or allowing them to live permanently in their home. But one day their home was searched and the Ten Booms were taken to prison.

In the dark months that followed, their faith was strengthened and remained unbroken even as earthly tragedy revolved around them. Eventually, Corrie and her sister were sent to a women’s prison where they worked in brutal conditions and in the evenings prayed and sang with the other prisoners, making a difference by sharing their faith.

I’m not going to tell the rest of the story…you’ll just have to read it for yourself! 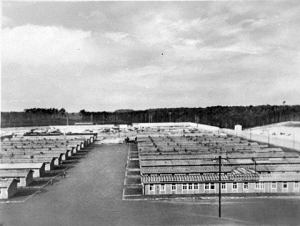 A Powerful Passage From The Book

Corrie is in prison for sheltering Jews. A German lieutenant is questioning her:

I started into the man’s intelligent blue-gray eyes: true National-Socialist [Nazi] philosophy I thought… And then to my astonishment I hear my own voice saying boldly, “May I tell you the truth, Lieutenant Rahms?”

“This hearing, Miss ten Boon, is predicated on the assumption that you will do me that honor.”

“The truth, Sir,” I said, swallowing, “is that God’s viewpoint is sometimes different from ours – so different that we could not even guess at it unless He had given us a Book which tells us such things.”

I knew it was madness to talk this was to a Nazi officer. But he said nothing so I plunged ahead. “In the Bible I learn that God values us not for our strength or our brains but simply because He has made us. Who knows, in His eyes a half-wit may be worth more than a watchmaker. Or – a lieutenant.”

Lieutenant Rahms stood up abruptly. “That will be all for today.” He walked swiftly to the door. “Guard!”

I heard footsteps on the gravel path.

“The prisoner will return to her cell.”

Why YOU Should Read This Book

It’s a story about forgiveness. It’s a story about courage and commitment to live what you believe, even in the harshest circumstances. Historically, The Hiding Place is a valuable account of one family’s work to save their neighbors and strangers from the Holocaust and the price the family paid for their beliefs and actions.

Yes, it’s a dark side of history. No, we should not forget it. The Hiding Place is a good primary source to start understanding the terror of the Holocaust without becoming overwhelmingly graphic.

P.S. Have you read The Hiding Place? Is there a part of the story that is particularly unforgettable? (I couldn’t share my favorite moment because it would be a serious spoiler.)