I have been assigned to the command of a Division – composed of Depts of N.E. Va (that under McDowell) & that of Washington (now under Mansfield) – neight of them like it much – especially Mansfield, but I think they must ere long become accustomed to it, as there is no help for it…

I find myself in a new & strange position here – Presdt, Cabinet, Genl Scott & all deferring to me – by some strange operation of magic I seem to have come the power of the land. I almost think that were I to win some small success now I could become Dictator or anything else that might please me – therefore I won’t be Dictator. Admirable self-denial! I see already the main causes of our recent failure – I am sure that I can remedy these & am confident that I can lead these armies of men to victory once more. I start tomorrow very early on a tour through the lines on the other side of the river – it will occupy me all day long ( a rather fatiguing ride it will be – but I will be able to make up my mind as to the state of things. Refused invitations to dine today from Genl Scott & four Secy’s – had too many things to attend to…

I will endeavor to enclose with this the “thanks of Congress” which please preserve. I feel very proud of it. Senl Scott objected to it on the ground that it ought to be accompanied by a gold medal. I cheerfully acquiesce in the Thaks by themselves, hoping to win the medal by some other action, & the sword by some other fait d’eclat. 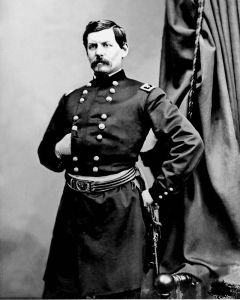 Meet George B. McClellan who liked to think of himself as a “Young Napoleon.” He’s one of those historical characters who ensures there’s never a dull moment in the pages of the past.

Vainly ambitious, this young West Point graduate, Mexican-War veteran, and civilian railroad vice president decided he was going to save the Union. Surprisingly, everyone believed him…at least in 1861.

General Winfield Scott – the Mexican War hero and man who’d developed the Anaconda Plan earlier in 1861 – was in bad health; he was sort-of forced out, sort-of retired and thirty-four year old McClellan stepped into the post as army commander. McClellan managed to win the confidence of President and some of the government leaders and started on his grandiose plans for training the army and plotting a spring campaign to end the war in 1862.

The First Battle of Bull Run terrified the Union army, but also strengthened its resolve. Militia and volunteers realized they couldn’t win the war by getting beat. And one way to become a stronger army was to get some real training and organization.

Fortunately, George McClellan was a brilliant organizer and had impressive charisma which made him a favorite commander with many of the common soldiers. He developed neat camps, better supply systems, and a chain of command. He got the “raw” troops on the drill ground and parade field to learn military maneuvers. And he sponsored reviews and parades to bolster the martial and civilian morale. 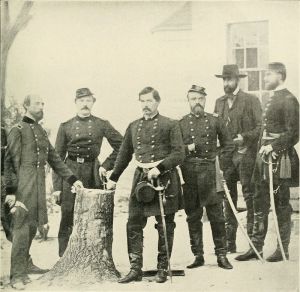 McClellan spent the autumn and winter of 1861 building his army. What he would actually do with it in 1862 remained a question…

Although McClellan would prove to be a poor battlefield commander, his service in actually making soldiers from over-eager would be an important to the Union cause. McClellan didn’t just build an army. He built “his army.” The Union Army of the Potomac was created and trained by General McClellan, and, for the most part, he had the respect of the men.

That respect was key to good leadership. The question still stands: what could McClellan have accomplished with his army if he’d had better fighting skills? Ultimately, McClellan was forging an army that would pass to other leadership and remain the core units that would fight throughout the next four years of the conflict in the East.