Voluminous accounts of the repulse of our forces at Ball’s Bluff have been published, including several official reports.

In the official list of the killed, wounded and missing of the Massachusetts 15th, Lt. Greene, mentioned in our last, is named among the missing. He may be a prisoner. The killed named in that list are 14, and no less than 228 missing.

No list of prisoners have been received. Many have doubtless been buried unrecognized, and it is not known how many or who were lost in the Potomac.

As to the responsibility for the disaster, it is said that a General Order from Gen. McClellan exculpates Gen. Stone from all blame, and attributes it to a subordinate officer, who is not named.

It is agreed that the disaster is attributed in great measure to the want of means of transportation. Only an old scow or two were found available.

Gen. Stone says that Col. Baker was charged with the duty of seeing that the transportation was adequate and under [missing word] rashness and negligence, which ought by some means to be traced before the public to the responsible officers.

BALL’S BLUFF FROM THE LEESBURG SIDE.

Baltimore, Oct. 28. – The following statement is from a highly respectable refugee from Leesburg: – When the intention of throwing Federal troops across the Potomac first became apparent, the rebel force in the neighborhood of Leesburg was so small, that it almost decided not to offer any resistance.

Some reinforcements were however brought up from back of Leesburg, and the force thus gather, not altogether exceeding 3,000, it was resolved to make a stand. Both sides, it was admitted at Leesburg, fought desperately.

The rebels feared that they would be surrounded by the larger force which they feared Banks would throw across the ferry above where the battle was fought, and most desperate efforts were made to defeat Gen. Baker before the expected reinforcements could come to his relief.

Our informant saw over 100 dead rebels, while their wounded were so numerous that all the farm houses in the neighborhood were occupied as temporary hospitals.

After the battle the rebels rapidly hurried up reinforcements, and at the time to which our informant extends they had from 10,000 to 15,000 men at Leesburg and Waterford.

—The bravery of the Massachusetts regiments has made a great impression in the army, and the German Generals who have seen much foreign service, are anxious to have regiments from the old Bay State…

The Battle of Ball’s Bluff

It’s a battle that’s often overlook or just plain forgotten. On October 20-21, 1861, a “simple” scouting expedition devolved into a small battle. When one detachment of Union troops ran into Confederate skirmishers near the town of Leesburg on the southern side of the Potomac River, fighting erupted. More Union soldiers were sent across the river, despite the extremely limited number of boats and other transportation methods.

When the Confederates brought up their reinforcements and drove back the Union troops, the river became a genuine natural disaster scene. In their hasty retreat, the northern men got to the river and started to swim across. Many drown, others chose to surrender rather than risk the river crossing. Union Colonel Edward Baker was killed in the battle, the first and only U.S. Senator to die in battlefield conflict.

As hinted in the newspaper reporting, nobody wanted to take responsibility for the disastrous planning and high Union casualties. The U.S. Congress created a Congressional Joint Committee on the Conduct of the War which would hamper and second-guess generals for the rest of the war.

Remember, this is an era without “instant news.” There was no tweeting from the battlefields. No Facebook updates. Etc., etc., etc.

Newspaper reports were the method of getting information for most folks. Sometimes the news was based on telegraph reports; other times the reporters gleaned information from informants, official reports, “journalists” in the field, or re-printing news from other papers. Casualty lists were printed in the papers, along with information about the conduct of local regiments.

Sometimes it took time for more information to surface. Thus, the newspaper excerpt in the quote was over two weeks after the battle, but is still reporting “new” news to its readers.

Imagine the awful suspense if one of your loved ones was listed as missing…how long would it be before you knew the truth? Was he a prisoner? Drown in the river? Dead? Wounded? Would you ever know?

P.S. If you had lived in 1861, would you care about the politicians’ war of blame which escalates with the Battle of Ball’s Bluff? 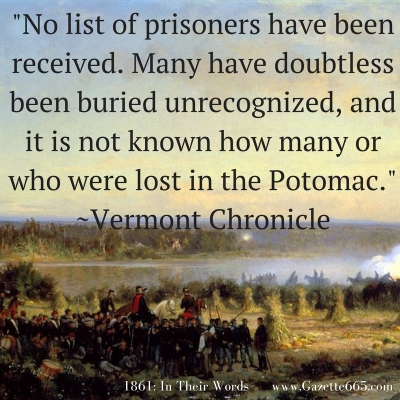