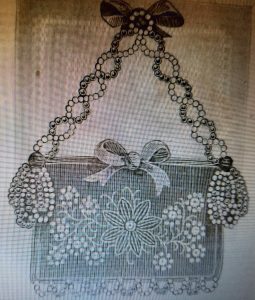 This little article is extremely ornamental when completed, and possesses the advantage of being also useful. A little case, like a book-cover, is cut out in cardboard; a similar shaped piece of velvet or silk, a little larger, is also required, on which is worked the sprig given in the illustration. This may be done in white beads, or embroidered in colored silks, or worked in gold thread. This is then stretched over the cardboard, brought over the edge, and gummed [glued] down.

A little square mattress cushion, covered in silk, is then gummed to one side of the cover; two or three cashmere leaves are stitched to it at the top edge, and the other half of the cover, which is loose, is lined and brought over them. It is now in the form of a book.

A bow of ribbon is placed at the back, and it is suspended by a chain of either gold or white beads to correspond with the sprig. A fringe of the same beads is attached to the two sides, and two tassels are added from where the chain proceeds. This forms a pretty little article for a fancy fair sale, as it may be made very showy; it is also very easy to execute. 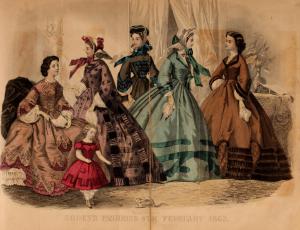 With entertaining stories and poetry, “helpful hints,” patterns, craft ideas, and fashion plates, Godey’s Lady’s Magazine influenced fashionable American society for decades. Published between the years 1830-1878, this women’s magazine had about 150,000 subscribers in 1860. It’s a helpful primary source for historians seeking to understand women’s ideals and society during the Civil War period. (And don’t forget fashion statements! Check out my article from last year on lady’s styles during the Civil War.)

It’s interesting to note the mention of a “fancy fair sale” in the article about making a needlebook. Supporting or organizing charitable causes was considered appropriate tasks for ladies. One of the organizations that received significant support from homefront ladies in the North was the U.S. Sanitary Commission. 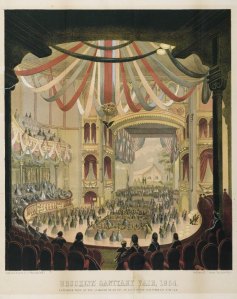 Organized in June 1861, the USSC sent agents to Union military camps and hospitals as health inspectors, doctors, supply agents, and nurses. To raise money for their patriotic efforts, Sanitary Commission fairs were held in large cities as fundraisers. Ladies would create items to donate and sell, bake, and organize entertainment at these events.

Perhaps needlebooks like the one featured in Godey’s Lady’s Magazine were created and sold to raise money for Union soldiers. It was part of the homefront’s contribution to the war effort.

This was a “different” blog post in our 1861 series. So why did I share directions for making a pincushion / needlebook?

It’s important to remember that life went on, even during the war years. I think we sometimes imagine that people’s lives revolved solely around the war. While the conflict certainly affected every aspect of American society and culture, “normal” life did not come to a screeching halt. There were still fields to plow, shops to visit, sewing to do.

Ladies made stockings and uniforms, but they also enjoyed making pretty things – like an embroidered sewing kit. However, a lady might donate her embroider for a patriotic cause, such as a fair fundraiser.

That’s important. Even a lady’s magazine can tell us about life in 1861.

P.S. So, I want to know… Are you inspired to make one of these sewing kits? 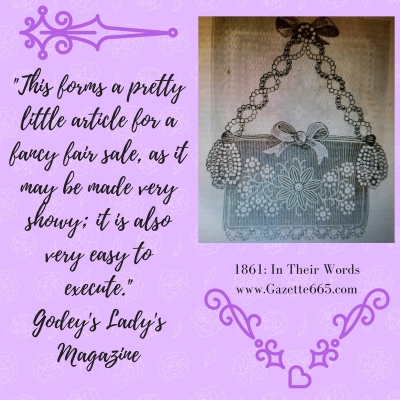