One of the best things about writing is finding the right setting for a story. In my opinion, the more challenge in the historical setting, the better emphasis on character change and struggle. An especially difficult and challenging time in the America history was the Great Depression (1929-1941). The states affected by the Dust Bowl were particularly hard-hit.

In the midst of this dirt and difficulty, I found a perfect setting for the short story “Song of Hope.” I’d read about the Dust Bowl and Depression; I’d heard stories from my grandfather who spent the earliest years of his life in the dust destroyed region of northern Texas. Listening to his stories and reading other accounts, I realized the amazing courage and hope those families had to stay (or move). I hope some of those challenges and successes are well-presented in With Gladness: A Christmas Story Collection.

On October 29, 1929, the Stock Market Crashed. It triggered a world-wide economic depression. The U.S. government under President Franklin D. Roosevelt started many programs in attempts to aid citizens and boost the economy; ultimately, World War II and the industrial boom caused by military necessity pulled America out of the economic depression.

Many men lost their jobs during the depression and struggled to find new work. Savings accounts were wiped out. People scrimped, saved, and looked for work. 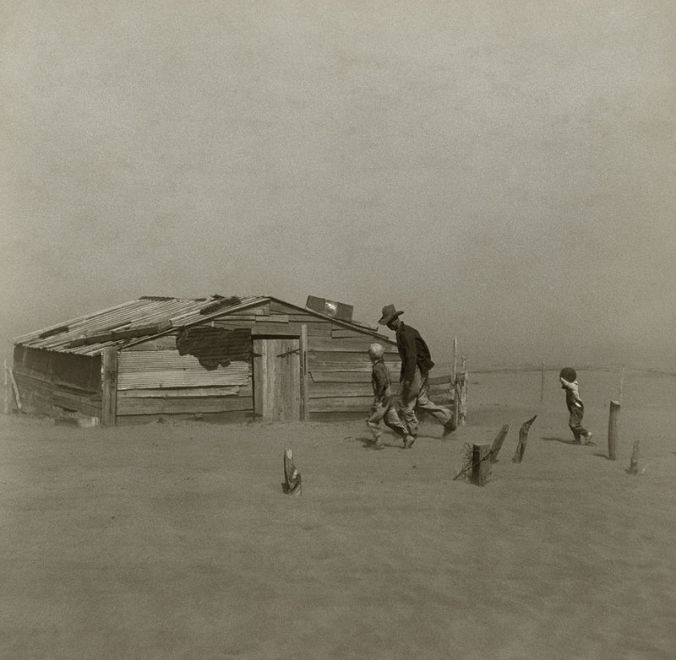 New technology allowed the farmers of the Midwest (America and Canada) to plough and plant larger fields. The new ploughs dug deep into the soil, disrupting the prairie grasses that held the top-soils in place during droughts and storms.

In the 1930’s bad droughts hit the agricultural prairies. Crops failed (causing more difficulty in the Depression Era). The fields were dirt – dry and empty. High winds and storms swept the dust into sky-darkening clouds and swept the region and the nation. Some dust storms went east and impacted the large cities. Sand and fine dirt blew into homes, drifted like snow along structures and fences, and choked the prairie farmers and families. Animals died from lack of forage.

Many families decided to leave the “forsaken” prairies and look for work in other areas. Some families immigrated to California, living in shanty towns and taking jobs in the orchards and fields of the Central Valley.

The Struggle To Survive

Dust everywhere. It was impossible to keep a home or family clean during the storms. The dark dust clouds hid the sun and the winds forced dust into buildings. Families didn’t have abundant food and the difficulties of providing for their loved ones troubled adults. Children sensed the frustrations and despair, but usually there wasn’t much they could do to improve the situation. Faith, character, and hope “for better days” kept people alive and families together. It was a struggle to survive.

Here’s an excerpt from “Song of Hope” in With Gladness:

Mabel hung the twisted circlet of barbed wire decorated with newspaper stars on the door and glanced over her shoulder. There was no black blizzard on the horizon, and she breathed a sigh of relief at the prolonged break from the swirling, choking dust. This year had been hard, so hard. The dust storms had hit the small Texas community without mercy. The crops were non-existent. Poverty was destroying families. Many were leaving – trying to get to California or some other place where there was work and hope. Like Father, the fifteen-year-old thought with a listless shrug. (page 77)

One thought on “With Gladness: The Dust Bowl”