Horses! They seem to be everywhere and yet forgotten in some Civil War studies. Just for fun, we thought it would be nice to spend a whole month of Fridays talking about some horses of the Civil War era that belonged to famous generals.

Of courses, horses had many tasks during the conflict – pulling artillery, supply wagons, ambulances, cavalry mounts, officers’ steeds. Horses are immortalized in the statues that grace battlefields, memorial parks, and cities. And – still we focus more on the man than the beast. That’s natural – after all, the generals fight the battles; the horse just carries them so they can see the battlefield and plan the strategy. But it’s time for some of those horses to get some extra attention and love!

Nope, I didn’t misspell the name. General Lee preferred to write his horse’s name as “Traveller” with two LL’s.

Where did Traveller come from? The general acquired the horse during his West Virginia Campaign in 1861. Traveller was Lee’s favorite horse throughout the war and was ridden in many famous battles and moments in the commander’s military leadership.

A staff officer described Traveller as standing about 16 hands high (that’s about 64″ at the shoulder) and a “dark, iron gray color” and his coloring lightened to almost white as he grew older. The horse was about five years old when Lee acquired him. Traveller was “strong and active,” “perfectly docile,” and “as calm as his master under fire.” 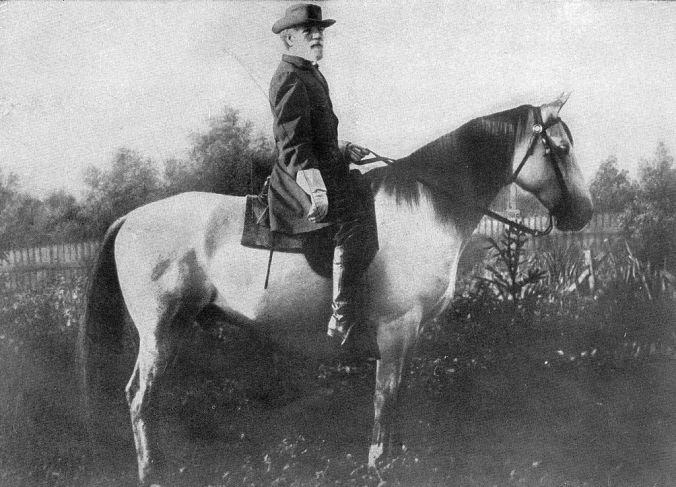 It seems he was a good, steady horse. Lee described the steed as a “patient follower” and described his reliability through all campaigns. Traveller witnessed history making moments on many occasions including Lee’s victory moments at Chancellorsville, defeat at Gettysburg, determination at the Wilderness, and the surrender at Appomattox.

During the Maryland Campaign of 1862, Traveller spooked; Lee suffered from a bad fall and injured both hands. The general couldn’t hold the reins and was forced to ride in an ambulance for part of the campaign. It’s the only major incident that I’ve run across of Traveller causing serious trouble the general. (Update: see the comment’s below for an incident when Traveller’s uncharacteristic skittishness may have saved General Lee’s life!)

In The General’s Words

General Lee was an excellent horseman and demonstrated affection for Traveller. In a post-war letter to one of his relatives, Lee wrote:

If I was an artist like you, I would draw a true picture of Traveller, representing his fine proportions, muscular figure, deep chest and short back, strong haunches, flat legs, small head, broad forehead, delicate ears, quick eye, small feet, and black mane and tail. Such a picture would inspire a poet, whose genius could then depict his worth and describe his endurance of toil, hunger, thirst, heat, cold, and dangers and suffering through which he has passed. He could [expand] upon his sagacity and affection and his invariable response to every wish of his rider. He might even imagine his thoughts through the long night-marches and days of battle through which he has passed. But I am no artist, and can only say he is a Confederate gray… 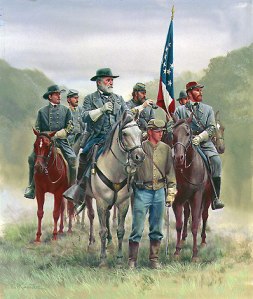 NOTICE THE HORSE IN THE ARTWORK! “Lee – The Enemy Is There” by Mort Kunstler (http://www.mortkunstler.com/html/art-limited-edition-prints

Traveller was with General Lee during the Appomattox Campaign and surrender; he returned to Richmond with the defeated commander. From Richmond, Traveller eventually moved to greener pastures in Lexington, Virginia – near his master’s new position at Washington College.

During the Lexington years, Traveller remained an “animal friend” for the general and his family. Lee would enjoy countryside rides on his favorite horse. Traveller’s coat changed from “Confederate gray” to white as he aged.

Shortly after Lee’s death in 1870, Traveller stepped on a rusty nail. Unfortunately, it embedded in his foot and couldn’t be removed. Lee’s faithful horse died of lockjaw and was buried outside the Lee Memorial Chapel in Lexington, Virginia. Today, people walk by the horse’s marked grave as they go to pay their respects to the general; some stop to remember the stories of the horse.

Traveller is “immortalized” in many statues. Most sculptures of Robert E. Lee depict him on a horse – and that horse is Traveller.

P.S. Do you have a favorite equestrian story from the Civil War era?