Sir, – Your order requiring me to direct General Loring to return with his command to Winchester, immediately, has been received, and promptly complied with.

With such interference in my command, I cannot expect to be of much service in the field, and accordingly respectfully request to be ordered to report for duty to the Superintendent of the Virginia Military Institute, at Lexington; as has been done in the case of other professors. Should this application not be granted, I respectfully request that the President will accept my resignation from the Army. 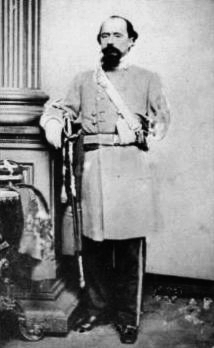 Remember the 1862 Romney Expedition? It concluded with General “Stonewall” Jackson leaving his subordinate commander – General Loring – and his troops in the captured town of Romney while Jackson, the First Virginia Brigade, and cavalry returned to headquarters in Winchester, Virginia.

Left in the snowy mountains about 40 miles from the headquarter town was not a good conclusion for Mr. Loring who was already upset about the winter campaign and his commander. So he sent correspondence to his friends in Richmond, Virginia, and got the Confederate government to see his side of the story. (Abandoned in the mountains by a crazy man who shouldn’t be leading armies.)

Jackson was upset. In his opinion, he had left Loring in the better place because there was shelter for the men and no well-built shelters for the troops in/near Winchester. Also Loring and his troops didn’t have to make the 40 miles march back on the icy mountain road. He wanted Loring to just stay in Romney to keep the outpost for the Confederacy. Lorings choice to complain directly to Richmond rather than communicating with his commanding officer especially galled Jackson.

The orders came. Jackson obediently sent them on to Loring and quickly penned a note to Judah Benjamin…resigning his command and asking to return to his teaching post at Virginia Military Institute. And he wasn’t bluffing.

Winchester panicked when they heard the news. What would they do without their “Stonewall”? Petitions and letters were dispatched to Richmond, begging them to find a way to keep Jackson as commander in the Valley District.

Eventually, Loring was transferred, and Jackson stayed. With respect and firmness, Jackson had revealed to Richmond his policy as a military commander: no interference. But he had also caused a headache for the Confederate government, and they would remember the incident for the next several months.

This is one of those amazing incidents in history where you can’t help wondering “what if?”

I try really hard not to get caught in the hypothetical situations that don’t exactly matter because they never happened.

But…what if Jackson had resigned and gone back to teaching? Would the Civil War have ended much sooner? Would he have been sent to the Western Theater and won impressive Confederate victories.