The late military successes have given us a season repose. People are changing their notions of the power of the country to meet such a trial, which is attended with quite favorable consequences to use in our position. Our diplomacy is almost in a state of profound calm. Even the favorite idea of a diversion into two states is less put forward than it was. Yet the interest with which the struggle is witnessed grows deeper and deeper. The battle between the Merrimack and our vessels has been the main talk of the town ever since the news came, in Parliament, in the clubs, in the city, among the military and naval people. The impression is that it dates the commencement of a new era in warfare, and that Great Britain must consent to begin over again. I think the effect is to diminish the confidence in the result of hostilities with us. In December we were told that we should be swept from the ocean in a moment, and all our ports would be taken. They do not talk so now. So far as this may have an effect to secure peace on both sides it is good….

We are much encouraged now by the series of successes gained, and far more by the marked indications of exhaustion and discouragement in the south. They must be suffering in every way. Never did people pay such a penalty for their madness. And the worst is yet to come. For emancipation is on its way with slow but certain pace. Well for them if it do not take them unaware.

The Battle of Hampton Roads with the duel of the ironclads echoed around the world. American ambassador to Britain – Charles F. Adams – observed and described that nation’s response. The inconclusive ironclad combat had three important outcomes:

First, American-British diplomatic relations calmed. A forgotten aspect of the Civil War is the international game. In 1861, the Trent Affair, coupled with lack of Union victories and Confederate overtures of friendship, edged England precariously close to joining the war. The Battle of Hampton Roads added another piece to the diplomatic puzzle, making the European nation less likely to interfere in the civil strife.

Secondly, in Britain’s eyes, the Union might have a chance at winning the war…especially with that new ironclad. Did Britain really want to ally with a possible loser (the Confederacy)? Even the idea of interfering with an invasion quieted. They would wait to see what happened next. It seemed possible that the USS Monitor, the U.S. Navy, and General McClellan’s grand army might decide the war in the Union favor…so why get involved if the conflict would be over soon?

Thirdly, the Americans had launched a ship far different than the vessels in the British Navy…

“Great Britain must consent to begin over again.”

For many decades, Britain celebrated their navy. “Britannia ruled the waves” as a naval power and trading empire. With colonies or outpost on most continents, Britain had to rule to the seas to maintain their international claims and territories.

With the account of the partially submerged American ironclad, the navy commanders, government officials, and people of England started to rethink their military position. Innovation was coming. The Americans were ahead. Britain would agreed to redesign their fleets and start building a modern sea force.

While rejoicing in the diplomatic calm (enforced by a display of military might), Adams turned his thoughts to the Southern states. He displayed satisfaction in the Confederacy’s difficulties – viewing the defeats and “turning tide” as punishment. Thoroughly convinced that the Confederacy was struggling to a slow death, Adams might have been surprised in the coming months when the Confederates beat the odds and struck back.

The war was far from over, but – as Adams wished – emancipation would take some Southerners by surprise. Then again – it would surprise some Northerners too. 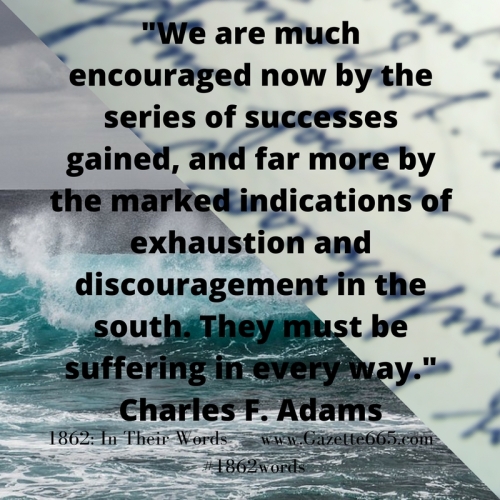