10 Things You Should Know About America’s First Combat Pilots

On the Fourth of July 1917, American troops marched through Paris, cheered by the French who enthusiastically welcomed a new ally. After years on the sidelines, the United States joined World War I and sent its volunteers toward the trenches on the Western Front.

However, the U.S. soldiers with General Pershing who marched through Paris weren’t the first Americans to fight in World War I. Long before the United States entered the conflict, American citizens volunteered to fight alongside the French and British; many lived in Europe and took an interest in the conflict, others journeyed across the Atlantic from their neutral country to enlist with the Allies.

Some of the most famous Americans to volunteer with the French were pilots – dare-devil stuntmen who wanted adventure and were friendly toward the allied cause. Since America was neutral, many joined the French Foreign Legion. Some future pilots served as infantrymen in the trenches before transferring to “flight training.” Eventually, a number of American pilots were allowed to fly together and form their own squadron – technically a French air-squadron, but flown by Americans. They become known as the Lafayette Escadrille.

American pilots during World War I were the first combat pilots in U.S. history. Many began their flying adventures long before the U.S. entered the war. Today’s blog post explores some fascinating details about the Lafayette Escadrille and their role in aviation history.

Here are 10 facts you should know about this unique unit:

On March 21, 1916, the French military responded to the petitions and requests from American pilots and civilians in France to let American volunteer pilots form a squadron with French officers and American pilots.

Americans had been flying French combat planes in French squadrons, but they wanted to form a squadron with their other countrymen. It would send a message to the home country, be easier to track volunteer American successes, and allow the French to more formally recognize these individuals who chose to defy their neutral country.

The Lafayette Escadrille received it’s name in December 1916, a nod to the the Marquis de Lafayette who instrumentally helped America during the War for Independence. The ideal was reversed in World War I – with Americans volunteering to help the beleaguered French.

2. Supported By Americans In Europe

Wealthy Americans and American global adventurers were in Europe when World War I began. Many admired the country of France and supported the ally cause. The wealthy volunteered funds and petitioned to support the Lafayette Escadrille. These civilians were proud of their American pilots and wanted to send a message to President Wilson, strongly hinting that the United States should officially join the war. 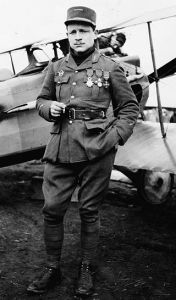 I’m afraid many of us picture biplanes twirling in a perfect blue sky during World War I. Wrong.

“Fighter” squadrons took off at alarms or on schedule to hunt enemy planes, escort the primitive bombers, or wait at high altitude for opposing planes to appear. Communication between pilots in the air was limited. Machine guns frequently jammed. Plane engines failed. Pilots suffered from high-altitude sickness and frostbite. Wood and canvas airplanes offered little protection for the pilots and weren’t easy to handle.

For some squadrons during World War I, life expectancy for a pilot was just a few days. The air combats were skillfully fierce, a tiny bit chivalric, bloody, fiery, and deadly.

Typically, World War I pilots could decorate their planes as they preferred. Often, a squadron symbol was included on the plane to easily identify the group.

The Lafayette Escadrille chose a warrior chief’s head as their squadron artwork.

Did you know the Lafayette Escadrille had pets? Yep, they had dogs, but they also had lions. One weekend a couple of pilots were spending their days off in Paris, and they saw an ad for a lion cub. They went and saw the little critter and paid about $30 for him. The cub was promptly named Whiskey, and he became the flyer’s mascot and friend. Later, they bought another lion and named her Soda.

At the end of the war, the pilots were ordered to take their lions to the Paris Zoo, and that’s where Whiskey and Soda spent the remainder of their lives – probably remembering the wild parties, whispered secrets, and triumphant missions… (If lions really remember?)

Pilot wasn’t an easy job. At every take-off, the fliers knew they might not come back. They saw their friends die in horrible ways. They suffered from physical and unseen wounds. Partying, drinking, and numerous forms of carousing were part of many pilots’ lives. It was a way they coped and tried to survive.

But not every pilot wanted a noisy “good time.” Some just wanted to talk with friendly people. A few pilots developed a sneaky system for landing their planes near friendly farmhouses or chateaus with real (or imagined) engine problems. Then they’d telephone the squadron headquarters and ask for mechanics and car to come get them. In the meantime, the pilot could enjoy a home-cooked meal and conversation with his new-made friends.

The best-known French commander of the Lafayette Escadrille, Georges Thenault faced a big challenges to lead, discipline, command, and turn a blind eye on his American pilots.

Successful, he won the respect of the pilots and taught them to be skilled fighter and pursuit pilots, fulfilling the squadron’s combat missions.

The Lafayette Escadrille was a successful air combat squadron. The pilots, commanders, and French military kept close record of the group’s success. News of their victories and ace pilots filtered back to U.S. papers, helping to keep the war in the forefront of supposed neutral American minds.

At one point, a couple of the Escadrille pilots were sent back the United States on a friendly, unofficial publicity tour. (Let’s just say…they weren’t invited to the White House.)

9. Heroes To The French

To the French civilians, the pilots of the Lafayette Escadrille were extra special. They were successful, adventurous, dashing…and most were handsome! Further, these pilots’ home country wasn’t officially involved in the war during the main years of the squadron’s activity – so there was added selfless, patriotic feeling.

Several of the Escadrille pilots received citations, awards, and medals for their actions and service. The French welcomed the volunteers and, later, remembered their service by dedicated a large memorial in Paris to the squadron.

With the United States joining the war in 1917, other American squadrons were formed (though they flew French planes). The Lafayette Escadrille disbanded in February 1918 with most of the pilots transferring to new American flying units, ready to share their knowledge and experience with the new, fledgling pilots.