1862: “The ‘Most Desperate Fight And Greatest Naval Achievement On Record’ “

We arrived here two days ago, after what was the ‘most desperate fight and greatest naval achievement on record,’ so every one says…

[Describes running the ships through the fire of river forts]

All this time, night and day, firerafts and ships loaded with burning cotton had been coming down the river and surrounded us everywhere. Besides these, the bombardment was continuous and perfectly awful. I do not believe there ever was anything like it before, and I never expect to see such a sight again. The river and shore were one blaze, and the sounds and explosions were terrific. Nothing I could say would give you any idea of these last twenty-four hours.

The next morning, April 25, we all got underweigh again, the Cayuga still leading, and at about nine o’clock New Orleans hove in sight. We called all hands and gave three cheers…!

There were two more fortifications still between us and New Orleans, called the Chalmette Batteries, but Captain Bailey though they could not be of much account, and that we had best push on. …In fact, though, there were a lot of treacherous rascals concealed in these batteries, and when we had come close enough to make them feel sure they could sink us, they opened a heavy fire. We gave them back as well as we could, but they were too much for one gunboat; so, after getting hit fourteen times, and the shot and shell striking all about us, we decided not to advance any future until some of the ships came up. Soon we had the Hartford on one side and the Pensacola on the other, and then the rebel battery was silenced very quick.

After this, there were no further obstacles between us and the city, and the fleet were soon anchored before it…

New Orleans – a strategic city for the Confederates to hold – had limited defenses in April 1862. Most of the troops allotted for city defense had been sent to the armies near Corinth and had fought in the Battle of Shiloh. About 3,000 militia remained in the city.

Now, New Orleans wasn’t completely defenseless. Two river forts below the city – Forts Jackson and St. Philip – were supposed to the guard that access to the city. Artillery batteries also overlooked the river. Additionally, the Confederates had a little collection of river defense ships, two incomplete ironclads, and fire-rafts. With the two forts and the batteries, they thought they’d be okay…but they probably hadn’t necessarily considered their opponent.

Admiral David G. Farragut collected his U.S. navy ships and bombarded the forts. Then he slipped his some ships passed the forts, shore batteries, and other defenses at night. Though the defensive fire presented obstacles, enough ships got through to make the advance up the river possible.

Encountering the Confederate ships and fire-rafts, the Union ships pressed on, destroying or incapacitating most of the enemy watercraft. The Union fleet arrived in sight of New Orleans, demanded surrender, and threatened to bombard the city. In the following days, the forts were captured, leading no options for the Southerns, except surrender. On April 29, 1862, New Orleans surrendered to Union forces.

Admiral Farragut was known for his daring moves. At the capture of New Orleans, Farragut made the decision to “by-pass” the larger forts and head directly toward the city. Instead of waiting around to capture the forts, he developed a plan to move his vessels by the forts, realizing that once the city was occupied (or close to surrender) the fall of the forts would be almost inevitable.

George Perkins – the letter writer – was a 25 year old lieutenant on a U.S. gunboat when he participated in the river passage, fight, and city surrender. Clearly, impressed with the feat (and rightly so), he was eager to report the praise he’d heard. In a season when some Union armies were waiting around for just the right moment to attack, others were launching forward in daring moves which would hasten the war’s end. 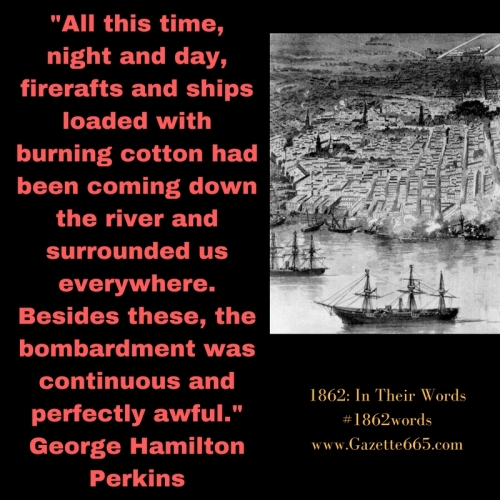