This week’s blog post takes gardening, homefront, and the military a historical step beyond the Civil War era. During the 1860’s, growing food was a necessity. People just did it. There wasn’t a propaganda campaign to get farmers into their fields and housewives into backyard gardens.

However, things changed in the 20th Century. In both World War I and World War II, gardening on the U.S. homefront became a patriotic endeavor. Many families planted victory gardens and their garden produce boosted the national and global food supply.

Today, we’ll compare the purpose of victory gardens in World War I and World War II, take about the effects of gardening, and its patriotic vibe. Ready to start? Let’s dig into the history!

World War I is one of the “forgotten” wars in U.S. History. It was fought between 1914-1918, but American didn’t officially enter the conflict until 1917. (Click here for an archive of our recent series about the U.S. entry and involvement in World War I.)

During World War I, food was not actually, officially, regulated and rationed. However, citizens were encouraged to be frugal and conserve food. One of the patriotic things to do on the American homefront was to plant and cultivate a victory garden – but it wasn’t a requirement.

World War II gardening is a little different story. World War II was fought between 1939-1945, and American entered the conflict after the attack on Pearl Harbor in December 1941.

During World War II, food was strictly rationed, and citizens were encouraged to conserve even more. Most did cheerfully, seeing it as a way to support the war effort. Rationing of staple foods and groceries meant that civilians needed to find a different way to supplement their diets. Also, if they ate food that they grew, they could conserve more food and money, leaving resources that would advance the Allied cause and get supplies to the army and civilians in Europe or the Pacific Theaters.

In both wars, Victory Gardens allowed the civilians to limit their own purchased/rationed food supply and have extra produce that could be donated to help the war effort. Think about it: if a family grew potatoes (for example) in their garden, they wouldn’t have to buy as much flour. The flour they didn’t buy could be sent overseas or made into rations for the military.

What grew in Victory Gardens? Just about anything and everything that could grow and was edible. It might vary from region to region. Some of the favorites were tomatoes, corn, lettuces, beets, peas, and other vegetables. According to the National World War II Museum, there were about 20,000,000 Victory Gardens in America. Families could trade or sometimes sell their produce within their local communities, adding to the variety on the kitchen table. Canning was a popular way to preserve some of the vegetables and fruits and was also a way to get “fresh” produce and its nutrients to the war theaters.

Civilians in the war zones suffered from hunger. Oceans away from the theaters of war, U.S. Civilians grew food which could be preserved – usually by canning – and sent overseas. Extra fruits and vegetables could also be preserved and sent to the military.

Volunteerism and patriotism motivated many on the American homefront during both wars. Planting and tending a Victory Garden was seen as a normal, resourceful, and patriotic thing to do. Propaganda, posters, and praise kept food conservation and adding to the national food supply in the forefront of folks’ minds.

Victory Gardens were part of the war effort. And not just a sideline task. Food keeps armies in the field. Extra food could save the lives and health of hunger civilians in war zones. The gardening projects allowed American civilians to know they were making a difference and supporting their country in an international fight for freedom.

I’ve informally interviewed grandparents and older friends, listening to their childhood memories of growing up during World War II. There are always a couple things that they all of share about. Rationing and Victory Gardens are two of those topics.

P.S. Do you have a favorite historic gardening memory? Tell us in a comment! 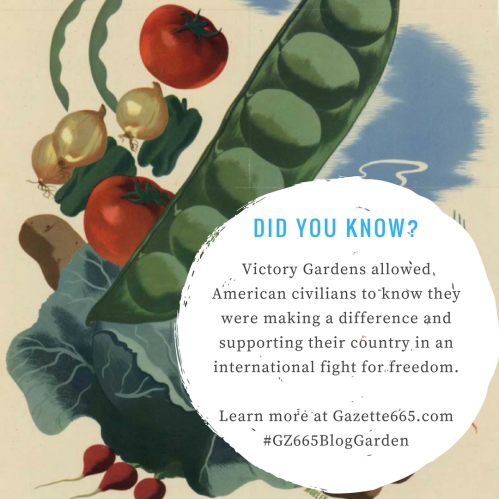