“Call me Ishmael.” It’s the opening line of a novel about the whaling industry, about revenge, and about redemption.

If you’re interested in the 19th Century American whaling industry, love classic American literature, or believe you were tortured in your high-school literature class, you’ve probably read Herman Melville’s novel Moby Dick. The novel has certainly shaped American views of whaling in the 1800’s. And if you’ve read, perhaps you’ve wondered: could it be true?

Today we’re wrapping up our three month examination of American whaling (moving on to lighthouses in July!) and we’re revealing some historical facts about this Melville novel,  the real account that inspired the story, and a recommendation for your summer reading list.

The Author & His Novel

In June 1850, American author Herman Melville wrote to a publisher that he was working on “a romance of adventure, founded upon certain wild legends in the Southern Sperm Whale Fisheries.” The book published in Britain and the United States in the autumn of 1851 and received with quite a few positive reviews for a literary work.

Ten years earlier, Melville collected first-hand experience for his novel. In 1841, he was part of the crew of the whale ship Acushnet and actually sailed around Cape Horn and into the Pacific, hunting whales. However, after about eighteen months, Melville jumped ship to explore the South Seas Islands. His time on the whaling ship adds reliability to his descriptions of the hunt and butchery described in the pages of his book.

It should be a truth universally acknowledged that every author has an agenda. Melville wrote a novel, not a history book. So keep that in mind when studying the pages of Moby-Dick. It has some fantastic historical information, but it’s still a story and some of the information is presented in a way that furthers the tale and probably shouldn’t be seen as a comprehensive understanding of the average whaleship. (Captain Ahab is a prime example; the majority of captains weren’t crazed in a revengeful search for just one whale…but oh, it adds so much to the story!) 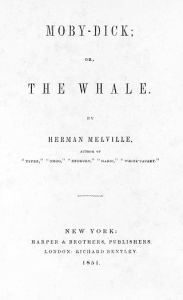 Along with his first-hand knowledge, Melville collected information from stories and legends from the whaling fleet. There are multiple stories about seemingly invincible white whales in the Pacific; one of these tales was published in 1839, and the whale’s name in that story was “Mocha Dick.”

It seems like Melville used many sources to inspire his story, but there is one account from the American whaling history which particularly influenced aspects of Moby-Dick. The story of the Whaleship Essex.

The eighty-eight foot ship was built in 1799. She sunk in 1820 in the Pacific Ocean, far from treacherous shores and in calm weather. How?

Essex left Nantucket Harbor in August 1819. Destination: whaling grounds off the western coast of South America. Her captain – George Pollard, Jr. – and first mate – Owen Chase – had sailed together before, but this was Pollard’s first voyage as captain. The crew struggled to get the ship out of the harbor, and later ran into a storm without reefing their sails. It took five weeks (a comparatively long time) to get around Cape Horn, and whales just weren’t as plentiful as the captain and crew had hoped. 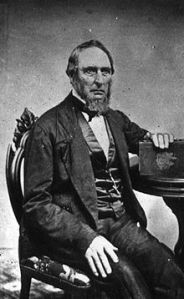 Owen Chase – first mate on the Whaleship Essex. This is a photograph taken later in his life.

Essex anchored at the Galapagos Islands to get fresh water and tortoises. A crew member set one of the islands on fire for a prank (not very environmentally conscious, huh?) From other whalers, Pollard heard about an offshore whaling location with many whales; he set a course for this location which a couple thousand miles into vast, southern Pacific ocean.

What Happened In The Pacific

November 20, 1820. The captain and crews were out in the smaller boats hunting whales. Owen Chase’s boat returned to Essex for repairs. His crew spotted a large whale (estimated 85 feet long, almost as long as the ship) acting strangely at a short distance away. Unexpectedly, the whale swam toward the ship and rammed the starboard side; the crew waited, afraid to provoke the stunned whale. The beast swam off and came back, aiming for the bow.

Chase later recorded: I turned around and saw him about one hundred rods [550 yards] directly ahead of us, coming down with twice his ordinary speed of around 24 knots, and it appeared with tenfold fury and vengeance in his aspect. The surf flew in all directions about him with the continual violent thrashing of his tail. His head about half out of the water, and in that way he came upon us, and again struck the ship. The whale pushed the Essex backward, then abruptly swam away and wasn’t seen again. The Essex bow was cracked, and water filled the hold.

A survivor from the Essex drew this sketch of the whale and the ship.

Alarmed, Pollard and the rest of the crew returned. The captain’s boat was the first that reached us. He stopped about a boat’s length off, but had no power to utter a single syllable; he was so completely overpowered with the spectacle before him. He was in a short time, however, enabled to address the inquiry to me, “My God, Mr. Chase, what is the matter?” I answered, “We have been stove by a whale.” (Owen Chase)

The crew spent a couple days salvaged what supplies and navigational equipment they could from the sinking ship and took refuge in their small whaleboats. They were approximately 2,000 miles from South America and about 1,200 miles from islands.

Unlike Moby-Dick where Ishmael is (SPOILER ALERT) saved by the Rachel, the Essex’s crew were stranded in their boats. They reached a deserted island, but most decided to put to sea again, hoping a ship would find them. Eventually the boats drifted apart, leaving the crews to separate fates. Food and water supplies – despite severe rationing – weren’t enough to keep the men the strong. Starvation set in, and later the living resorted to cannibalism to stay alive. After approximately ninety-five days stranded at sea, the survivors were rescued. From the Essex’s crew of twenty, only eight survived.

What You Need To Read Next

That’s the history of the fateful voyage in a nutshell because blog posts have word limits.

However, if you want to learn more about this remarkable, courageous, and horrifying tale, you absolutely must read In The Heart Of The Sea: The Tragedy Of The Whaleship Essex by Nathaniel Philbrick. (Not recommended for children.) It’s a non-fiction book that reads like a novel and delves into lots of primary source material and interpretation.

That’s a little bit of the history and legends woven into the classic American novel Moby Dick. Be sure to read that novel too!

P.S. While I wouldn’t advocate taking historical “facts” from movies – the 2015 film “In The Heart Of The Sea” is worth watching. Rated PG-13, I’d recommend parental guidance, and just know it’s a film about whaling and survival.

5 thoughts on “Moby-Dick: The Truth Behind The Legend”