Sir: In accordance with the suggestion of Earl Russell, in a communication to Mr. Adams, the American minister in London, I beg to lay before you the information and circumstances which have come to my knowledge relative to the gunboat being fitted out by Messrs. Laird, at Birkenhead, for the confederates of the southern United States of American, and intended to be used as a privateer against the United States.

On my arrival and taking charge of the consulate at Liverpool, in November last, my attention was called by the acting consul, and by other persons, to two gunboats being or to be fitted out for the so-called confederate government…

…Everything about the vessel shows her to be a war vessel; she has well-constructed magazines; she has a number of canisters of a peculiar and expensive construction, for containing power; she has already platforms screwed to her decks for the reception of swivel guns. Indeed, the fact she is a war vessel is not denied by Messrs. Laird, but they say she is for the Spanish government. This they stated on the 3d of April last… Seeing the statement, and having been already informed from so many respectable sources that she was for the so-called confederate government, I at once wrote to the minister in London to ascertain from the Spanish embassy whether the statement was true. The reply was a positive assurance that she was not for the Spanish government. I am therefore authorized in saying that what was stated on that occasion, as well as statements since made, that she is for the Spanish government, are untrue.

I am satisfied, beyond a doubt, that she is for a confederate war vessel.

If you desire a personal explanation or information, I shall be happy to attend you whenever you request it.

Very respectfully, I am your obedient servant,

The Northern states were the epicenter of the maritime industry and shipbuilding in America. During the Civil War, Southern docks managed to refurbish, outfit, or construct some vessels, but supplies and facilities were limited. However, money buys, and European shipyards were contracted to secretly build ships for the Confederacy.

Confederate cruisers – like the one mentioned in the letter – and blockade runners (swift ships constructed with cutting-edge technology for the 1860’s to slip through the Union blockade and bring weapons, luxury goods, or supplies to the South) were built in England and Scotland yards.

However, Britain had to be careful since – officially – the country was staying out of the war. So…the ships had to be built in open secret. As illustrated by the letter from the customs collector of Liverpool to the U.S. consulate, the story surrounding Steamer No. 290 just didn’t make sense. It was a warship; it wasn’t for Spain – but opening confronting the situation could create an undesirable situation in an already challenging diplomatic atmosphere.

Steamer No. 290. She wasn’t built for the Spanish, and she certainly wasn’t a merchant ship. She was launched under the name Enrica on May 15, 1862, and left harbor with a civilian crew at the end of July; a USS vessel tried to intercept the ship, but was unsuccessful. “Enrica” sailed to the Azores were armament was added and the final details made to complete her as a warship. Captain Raphael Semmes and the official crew arrived. The ship was christened and commissioned on August 24, 1862, as the CSS Alabama…and sailed for history’s horizons.

For the next two years, CSS Alabama cruised internationally, completing seven raids, boarded 450 Union vessels – burning or capturing 65 of those ships, and capturing a couple thousand prisoners. This was a problem ship for the Union navy.

CSS Alabama‘s “fun” came to an end in June 1864 off the coast of France in a battle with the USS Kearsarge. The Confederate ship was sunk in the ensuing battle. 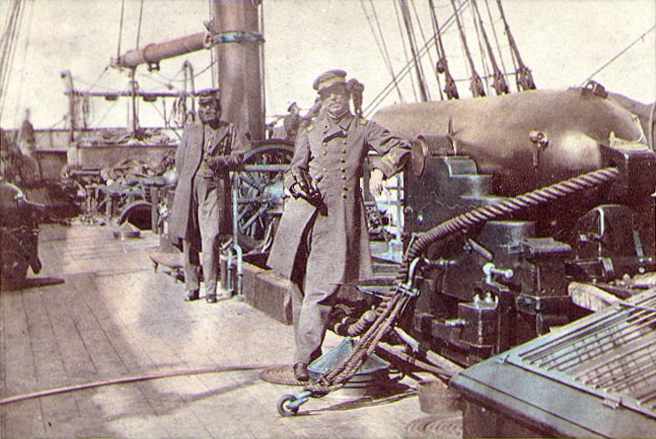 In my opinion, the maritime aspect of the Civil War generally doesn’t get as much of the spotlight as it deserves. There’s intrigue, diplomacy, raids, captures, burnings, chases, wrecks, blockades, on-shore spies, and so much more. And there were some fascinating maritime technological advances; and, just in case you’re wondering, the ships were usually powered by steam, but many still carried sail (like the Alabama.)

It’s almost like we think of it as different war at sea. Sure, causes may have been the same, but Civil War at Sea is an entirely different image than the classic infantry charge or defense that most of us probably envision when “Civil War” is mentioned. In reality, the war at sea is just as important as the land battles; certainly, there are times when the naval conflicts seem like “side-shows,” but we should try to more fully understand this aspect of the conflict and it’s effects on the war and on the future of maritime warfare.

P.S. Do you have a favorite naval ship from the Civil War?