5 Things You Should Know About Saratoga, 1777

The Battles and Surrender at Saratoga, New York, in 1777 marked a major turning point in the war. It’s a series of events filled with drama, jealously, and courage. And they had global repercussions.

Today, we’ve rounded up five things you should know about Saratoga…and we think you’ll discover it’s just as important as Yorktown!

First, you have to know that there are three important events that generalized history books lump under the title “Saratoga.” Two battles and a surrender. And you can’t have just one without the other two.

On October 7, 1777, the Battle of Bemiss Heights ends with an American victory, and the British retreat to Saratoga. (Battle #2)

2. Culmination of the British Invasion From Canada

How did the British end up on those battlefields and surrender field? Well, in 1777 the British commanders devised a three-way maneuver that was supposed to split the rebellious colonies and allow the British armies to converge and destroy their opponents. Basically, the idea was to cut off New England from the Middle and Southern colonies because the British believed New England was the main trouble spot in their rebellion.

General John Burgoyne left Canada (which was British territory) in June 1777, captured Fort Ticonderoga, and gained control of the upper Hudson River Valley. Then he and his army had logistical and supply problems, and Burgoyne wasn’t inclined to move quickly. While he waited, hoping the situation would improve, those American Rebels gathered their forces. (It’s slightly reminiscent of McClellan at the Gates of Richmond during the Civil War.)

We should note that while Burgoyne wasn’t exactly successful his colleagues in the east had captured Philadelphia, the Continental Capital. And when King George III heard that news, he supposedly remarked, “I have beat them! Beat all the Americans!” (I wonder what he said when he heard about the events at Saratoga…)

While Burgoyne waited, Colonial General Horatio Gates got some reinforcements from General Washington’s army. Benedict Arnold– one of the best Continental battlefield commanders at that time – and two brigades of soldier arrived. Dan Morgan and his unit of Virginian sharpshooters also joined Gates.

But there was a problem.

Gates and Arnold weren’t friends, and both were ambitious. Rather than be ambitious together, they fought each other at the strategy table and with passive aggression on the battlefield. Gates was cautious, Arnold was bold. During the battle at Freeman Farm, Arnold persuaded Gates to send in troops to stop British attacks, even halting a British flanking column with a well-placed counterattack. Arnold continued to feed units into the fight until Gates put an end to the battle and decided to withdraw the American army. Arnold was irritated – to put it mildly.

At the next battle, Gates placed Arnold in confinement, ordering him to stay in his quarters and not take part in the battle. (Good luck.) Arnold didn’t listen, escaped, and led an attack on a key position which broke the British lines. Now, Gates was irritated – to put it mildly. However, Arnold was badly wounded during the fighting…and Gates would get the glory in “episode three” at Saratoga.

The Americans pursued the British army through a rain storm and unpleasant mud on the retreat to Saratoga. By October 13, the British were surrounded. Terms were discussed three days later, and the British insisted that “convention” was a nicer word that “capitulation.”

On October 17, 1777, while the Colonial bands played “Yankee Doodle” about 6,000 British troops surrendered. Later, most of the prisoners were marched eastward, and the Colonials gained control of Fort Ticonderoga and Lake Champlain again.

It took time for the news of Burgoyne’s surrender to travel overseas, but when it reached Benjamin Franklin’s desk in Paris on December 4, 1777, he was quick to tell Louis XVI of France. Two days later, the king asked to begin negotiations for a French-American alliance.

The following year – February 6, 1778, to be exact – the French and American treaty was signed. About a month later, France declared war on Britain.

Saratoga officially changed the American War For Independence from “rebellious colonies” against the Crown to a war with global interest. It also foreshadowed a final surrender at Yorktown that would take place four years and two days after the Saratoga Surrender. (But the final treaty to end the war wasn’t signed until 1783, for your information.) 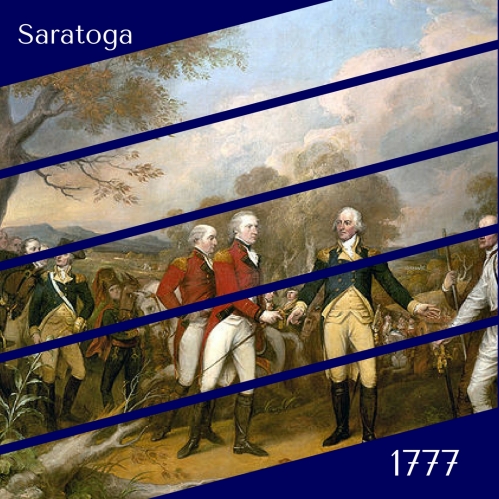