Ordered, That Major-General Hunter and Brigadier General Phelps be no longer held and treated as public enemies of the Confederate States, but as outlaws, and that in the event of the capture of either of them, or that of any other commissioned officer employed in drilling, organizing, or instructing slaves with a view to their armed service in this war, he shall not be regarded as a prisoner of war, but held in close confinement for execution as a felon, at such time and place as the President shall order. 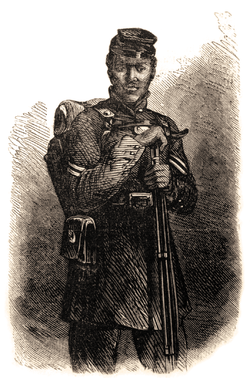 If you’ve been following our 1862 series, you might remember the post a couple weeks ago about General Phelps and his plan to recruit runaway slaves in his area of Louisiana and form a military unit. His commanding officer squashed the idea, and Phelps – a dedicated abolitionist – eventually resigned in protest.

Slavery was part of the culture in the South during the Antebellum Era and the Civil War. That is a fact – not a justification. Sure, by the statistics, most Southerners didn’t own slaves, but it was certainly part of their society and culture. And many slave-owners weren’t keen on the idea of giving up their slaves. (Okay, I know there were exceptions; there is a time and place to acknowledge the exceptions, but stop making the exceptions a feel-good rule.)

Think about it. If Union generals started recruiting escaped slaves to fight against their former masters, what would happen? One thing for certain: slavery was going to end. Slavery – a piece of the states rights argument – was going to disappear when former slaves fought back on the battlefield under the authority of the Federal government. And that presented some issues for the Confederate government.

Making Their Own Rules Of War

Usually wanted outlaws had committed awful crimes. Usually men who strive to help the oppressed and battle for freedom are praised as heroes. But…Generals Hunter and Phelps weren’t heroes to the Confederacy. How could they be? Those commanders were threatening slavery, something many Southerners weren’t ready to give-up.

In an effort to send a warning message and maybe strike fear in those generals’ hearts, the Confederate war department issued orders. If those generals or any other officer who organized former slaves for war were captured, they weren’t going to be treated as prisoners of war; they were going to be executed as criminals. This wasn’t the first or last time the Confederacy would take verbal action like this. (Remember General Butler? He had a price on his head.)

Slavery was tottering closer and closer to an end with actions and orders like Phelps. Honestly, that scared many Southerners and prompted harsh words and threats. I suppose if we tried really hard – make an effort – we can begin to understand the desperation behind this orders. But it’s hard to try. Slavery was wrong, and from a modern view, we find ourselves much more willing to applaud Hunter and Phelps for their effort.

Not in 1862 but later in the war, a few Confederate generals would suggest arming slaves – even promising their freedom if they would fight. Ultimately, that didn’t happen.

However, in July 1862 the U.S. Congress passed legislation allowing African American men to volunteer to save the Union. Shortly after Lincoln signed the Emancipation Proclamation on January 1, 1863, the U.S. War Department officially authorized the formation of African American regiments. The 54th Massachusetts Volunteer infantry was the first U.S.C.T. Unit. (For more information visit this page on the African American Civil War Memorial Museum website.)

Freedom was still on the horizon in August 1862. But it came – eventually. And African American men would battle for freedom while the Confederates continued to take harsh and brutal measures against the inevitable circumstances. 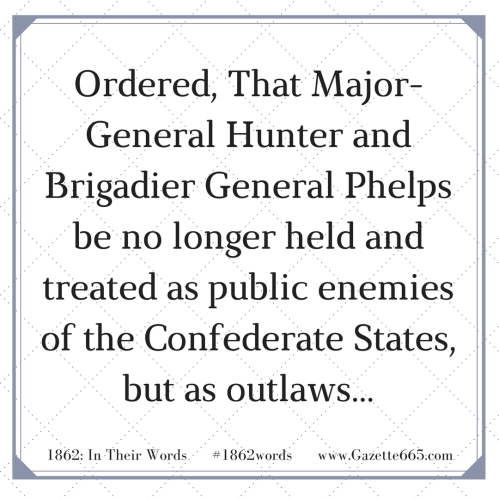