I have just read yours of the 19th address to myself through the New-York Tribune. If there be in it any statements, or assumptions of fact, which I may know to be erroneous, I do not, now and here, controvert them. If there be in it any inferences which I may believe to be falsely drawn, I do not now and here, argue against them. If there be perceptible in it an impatient and dictatorial tone, I waive it in deference to an old friend, whose heart I have always supposed to be right.

As to the policy I “seem to pursuing” as you say, I have not meant to leave any one in doubt.

I would save the Union. I would save it the shortest way under the Constitution. The sooner the national authority can be restored; the nearer the Union will be “the Union as it was.” If there be those who would not save the Union, unless they could at the same time save slavery, I do not agree with them. My paramount object in this struggle is to the save the Union, and is not either to save or to destroy slavery. If I could save the Union without freeing any slave I would do it, and if I could save it by freeing all the slaves I would do it; and if I could save it by freeing some and leaving others alone I would also do that. What I do about slavery, and the colored race, I do because I believe it helps to save the Union; and what I forbear, I forbear because I do not believe it would help to save the Union. I shall do less whenever I shall believe what I am doing hurts the cause, and I shall do more whenever I shall believe doing more will help the cause. I shall try to correct errors when sown to be errors; and I shall adopt new views so fast as they shall appear to be true views.

I have here stated my purpose according to my view of official duty; and I intend no modification of my oft-expressed personal wish that all men ever where could be free. 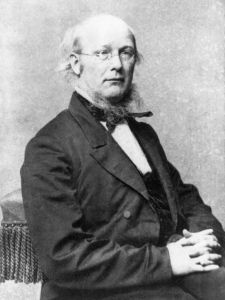 Today’s featured primary source is a reply letter from President Lincoln to Horace Greeley. It’s a powerful primary source on its own, but it’s also helpful to know the historical context. It all started when Horace Greeley – founder and editor of the New York Tribune – published an open letter to the president, urging the commander-in-chief to use new military powers (the Confiscation Act) to free the slaves in the Southern states. (You can read the full text of that public letter HERE.)

That letter hit the presses on August 19th. Three days later, Lincoln penned the reply to Greeley. On the 25th of August 1862 Lincoln’s reply was published in the New York Times. The country now read the president’s official stance on the first to save the Union and slavery.

The question remained: if or when would the president decide that ending slavery might be a step toward restoring/preserving the Union? (Spoiler Answer: September 1862. Coming in a few weeks!) 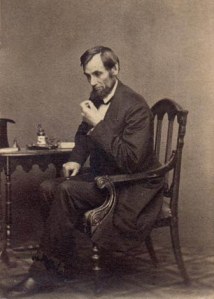 In his letter and in many other primary sources, Lincoln stated that his goal was the save the Union – meaning the unity of the United States. (How many times can I use “union” or a variation of the word in a sentence?) We’ve talked about that on previous occasions HERE and HERE.

Lincoln’s reply clearly lays out his stance toward the war and politics of his day. No one who believed the president and read that letter was going to question that saving the union was the president’s first goal. The question came – was it necessary to end slavery to end the war? The answer seems completely obvious to us in the 21st Century, but keep in mind that abolition (sadly) wasn’t important to all Americans, even in the North during the 1860’s.

The president carefully separated his political and war stance from his personal preference. In a simple, well-worded sentence, he expressed “my oft-expressed personal wish that all men ever where could be free.” For Lincoln (at least at this point in the war), nothing – not even personal belief and preference – was going to interfere with his mission to reunite the nation.

“I have not meant to leave anyone in doubt,” Lincoln insisted, well aware of how quickly rumors circulated.

Guess again, if you think misunderstood presidents, misinterpretation of White House policy, and ridicule of the president are anything new. Lincoln was under “heavy fire” for his choices and war time powers in 1862.

Personally, I think this letter was carefully crafted and worded with the intention that Greeley might publish it. In an era before electronics and instant communication, Lincoln was making a statement to the country as well as to “an old friend.” And – as a mastermind politician – the president also laid the groundwork in case he decided to free the slaves. If such an opportunity arose in the war effort, Lincoln had already publicly explained his position and reasoning. If…when… 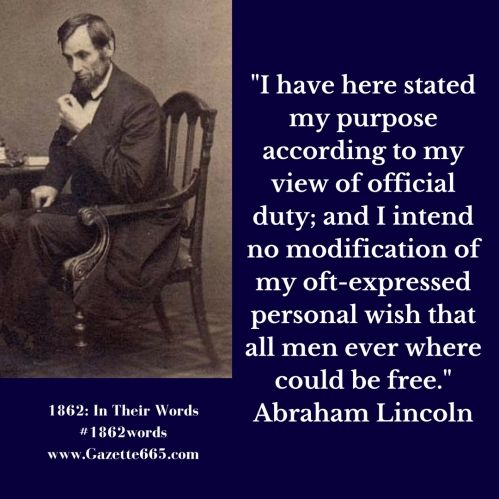 One thought on “1862: “Personal Wish That All Men Everywhere Could Be Free””