…We were engaged with the enemy at and near Manassas Junction Tuesday and Wednesday, and again near the battle-field of Manassas on Thursday, Friday, and Saturday; in all of which God gave us the victory. May He ever be with us, and we ever be his devoted people, is my earnest prayer. It greatly encourages me to feel that so many of God’s people are praying for that part of our force under my command. The Lord has answered their prayers; He has again placed us across Bull Run; and I pray that He will make our arms entirely successful, and that all the glory will be given to His holy name, and none of it to man. God has blessed and preserved me through His great mercy. On Saturday, Colonel Baylor and Hugh White were both killed, and Willie Preston was mortally wounded…

Do the names Bull Run and Manassas sound familiar? Well, the first major battle of the war was fought along Bull Run creek and near Manassas Junction in July 1861. Union and Confederate armies converged on the location again at the end of August 1862.

On August 27th, Confederate General “Stonewall” Jackson captured supplies at the junction, alerting Union General Pope to the location of part of the Rebel army. The following day he attacked a Union column while, to the west of the battlefield, Confederate General Longstreet’s troops cleared Thoroughfare Gap and headed to reinforce Jackson August 29th – Pope attacked Jackson’s defensive line along an unfinished railroad cut and Longstreet arrived with his men, taking position on Jackson’s right flank. On the 30th, the Confederates counterattacked, driving the Union troops back. Like First Bull Run, Second Bull Run was a Confederate victory, but this time the Union troops were not routed.

Casualties were high. Estimates place the losses for both sides (combined) at around 21,760 dead, wounded, and missing.

Thomas J. Jackson rarely – if ever – wrote a letter to his beloved wife without writing about God, scripture, or prayer. Religion and faith were a stronghold for this Confederate general, and he regularly attributed successes and defeats to God’s sovereign plans.

Prior to the war, Jackson had joined the Presbyterian Church in Lexington, Virginia, and habitually studied the Bible and books on Christian doctrine. During the war years, the general used his influence to encourage religion among the soldiers and tried to use his life as an example of a Christian soldier. (Jackson died in May 1863, following the Battle of Chancellorsville.)

Colonel Baylor commanded the 5th Virginia Infantry Regiment which was part of the Stonewall Brigade.

Hugh White was the son of Jackson’s Presbyterian pastor in Lexington, Virginia. The general wrote a personal letter to the White family after the battle and loss.

Jackson was married twice. His first wife – Elinor Junkin (d. 1854) – had a sister named Margaret. (Bear with me for a little family tree lesson here…) Margaret married John T.L. Preston and Willie Preston became one of her step-children; Jackson was good friends with the Preston Family. Willie Preston was not a direct relation to Jackson, but accounts suggest Jackson may have thought of him as a nephew. Distressed at hearing about Willie Preston’s wounding, Jackson berated the surgeon for leaving the young man, then walked away from the group of officers.

These casualties at Second Manassas prompted one of the few recorded times that Jackson publicly displayed emotion over the losses. The boys he had watched grow up in Lexington, Virginia – the sons of his friends – were dying while he won hollow victories. 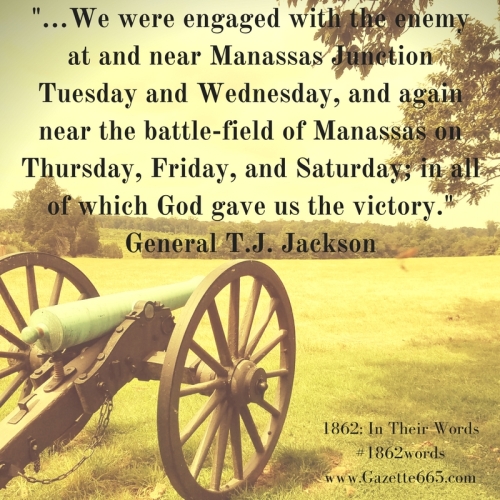