The present posture of affairs, in my opinion, places it in the power of the Government of the Confederate States to propose with propriety to that of the United States the recognition of our independence.

For more than a year both sections of the country have been devastated by hostilities which have brought sorrow and suffering upon thousands of homes, without advancing the objects which our enemies propose to themselves in beginning the contest.

Such a proposition coming from us at this time, could in no way be regarded as suing for peace, but being made when it is in our power to inflict injury upon our adversary, would show conclusively to the world that our sole object is the establishment of our independence, and the attainment of an honorable peace. The rejection of this offer would prove to the country that the responsibility of the continuance of the war does not rest upon us, but that the party in power in the United States elect to prosecute it for purposes of their own. The proposal of peace would enable the people of the United States to determine at their coming elections whether they will support those who favor a prolongation of the war, or those who wish to bring it to a termination, which can but be productive of good to both parties without affect the honor of either.

I have the honor to be with high respect, your obt servt

Maryland stayed in the Union. And in September 1862, the Confederate Army of Northern Virginia – commanded by General Robert E. Lee – invaded Maryland. The general wrote this letter to the Confederate president during the campaign, outlining a “diplomatic” plan.

At the time, the Confederacy seemed to have the upper hand militarily in the east. McClellan’s “on to Richmond” campaign had failed. Cedar Mountain and Second Bull Run (Manassas) had been Southern victories. Lee suggested that asking for peace while having the upper hand would not be a disadvantage to the want-to-be nation and might actually enlist the ever-elusive support from Europe.

Lee was convinced both sides wanted peace and if it could be obtained with Southern independence, he was ready to win the war. One more victory – especially one on Northern soil – might turn the tide favorably for his side. And the political situation in the North might also play a role.

The 1862 congressional and state elections were set to happen in the North in the autumn. Some political factions/parties were clamoring for peace – particularly those known as Copperheads. If Lee won a victory in a Northern/border state, another loss and longer casualty lists might push voting men to elect representatives who would advocate to “end the war and let the South go.”

Lee thought a proposal sent to the Federal government and possibly channeled to the Northern public might cause a public outcry and a demand for peace on “honorable terms.”

Lee’s plan sounds nice on paper, but I think he missed an important point. If the Northern people and Federal government had decided to settle the war at that point when it appeared like the South had the upper hand, they would still have been defeated in the objective to “save the Union.” That wasn’t going to happen while Lincoln was president.

Additionally, although the fighting hadn’t gone favorably in the east, New Orleans was in Federal hands and there was other positive progress in the western and Mississippi regions.

Ultimately, the grand peace and independence proposal didn’t happen. The Maryland Campaign was far from over.

And a very important piece of paper with directions drafted by Lee himself would fall into the “wrong” (or providentially “right”) hands. Come back later today for our second post related to the campaign.

P.S. What do you think? Could Lee’s plan have worked? In your opinion, why or why not? 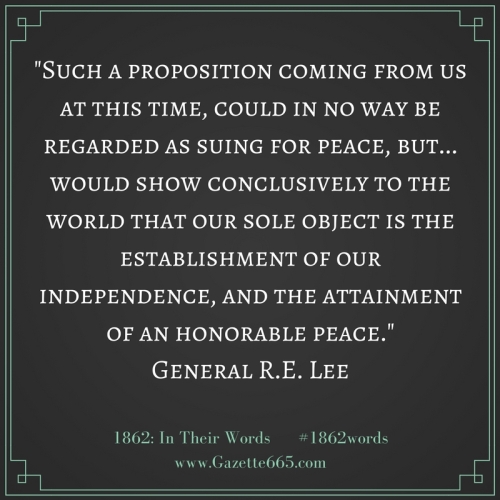 One thought on “1862: “Attainment Of An Honorable Peace””