It’s time to focus on some aspects of maritime history during the American Civil War. We’ll spend the rest of the year (on Wednesdays) taking about Blockade Runners – their voyages, international politics, ships, captains and crew, and other aspects of these “secretive” merchant vessels.

However, in today’s blog post we’ll talk about the blockade. After-all, it’s rather hard to have a blockade runner if there is no actual blockade. So I’ve asked the five classic questions (what, when, where, why, and how) and the answers will give some anchoring information as we sail into this new topic connected to 19th Century American Maritime.

The Blockade. It was supposed to border the Southern coastline to prevent supplies and messages from reaching the Confederacy from the international communities. 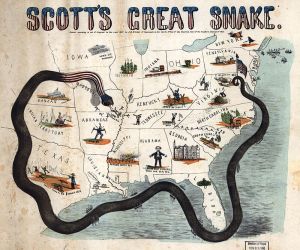 From 1861-1865. The blockade idea was instituted by the Federal government just days after the firing on Fort Sumter which official started the Civil War. General Winfield Scott drafted a plan to end the rebellion in the Southern states using the oceans, rivers, and other waterways as avenues for invasion. The plan was nicknamed “The Anaconda Plan” since it was supposed to strangle the Confederacy the way that big snake chokes its prey. The blockade was part of that “Anaconda Plan” but it took a while before the U.S. Navy had enough vessels to effectively impair the supply line to the Confederacy from the West Indies and Europe.

Eventually, the Union blockade spanned the coastline of the Southern states from Virginia to Florida in the Atlantic and from Florida to the Texas/Mexico border along the Gulf. It wasn’t an actual line of ships sitting in the ocean; rather it was Union ships on patrol, watching for blockade runners trying to enter port or inlets along the Southern Coast.

To prevent supplies from reaching the Confederacy. We’ve talked about trade and how important it was/is to the United States. Prior to and during the Civil War, imports and exports were especially important to the South. That region had an agricultural economy, growing cash crops (like cotton, rice, sugar, tobacco) which the planters would export to the North, West Indies, or Europe to exchange for manufactured products. Obviously, the Southern states didn’t want to trade with the North during the conflict, so that meant their sources for manufactured goods during the war would be international sources.

A blockade of the Southern ports and coastline could cut off that trade (or at least limit it), making it harder for the Confederacy to get guns, munitions, medical supplies, cloth, and luxury items. The lack of supplies could hasten the end of the war.

Not so fast… When Lincoln implemented the blockade, the U.S. Navy had only 42 commissioned ships (there were an additional 48 in dry dock or in need of refitting and waiting for captains and crews). That was a problem!  The navy needed ships, men, and a strategy to make the blockade happen.

The Civil War did prompt an increase in the U.S. navy ships and laid some foundations for the modern force. By the end of the conflict, they had about 500 ships available or in service. And that’s how the blockade happened and an important chapter in U.S. naval history began.