Publish affairs unchanged. Will Uncle Abe Lincoln stand firm and issue his promised proclamation on the first of January, 1863? Nobody knows, but I think he will.

By the end of 1862, the question loomed in the minds of northerners, southerners, foreigners, soldiers, civilians, politicians, diplomats, citizens, and slaves. Would Abraham Lincoln actually sign the promised Emancipation Proclamation on January 1, 1863, and grant freedom to all slaves within states still in rebellion against the Federal government?

The effects of the signature would be far-reaching, forever changing American History. A promise of freedom for the enslaved as Union armies conquered and occupied more of the seceded Southern states. A change in an entire region’s way of life. The pursuit of a Constitutional Amendment to end slavery everywhere in the United States. A continuation of a discussion about equality (or, sadly, inequality or colonization).

A Promise To Fulfill

After the Battle of Antietam in September 1862, Abraham Lincoln announced that if the Southern states had not returned to the Union by January 1, 1863, he would free the slaves in those states. It was threat, a compromise, and a hope for freedom.

Threat: If the rebellious states didn’t come back, slavery which was a cornerstone in their Southern society, would end. Lincoln could use the war and war effort as a stepping stone to freedom for the enslaved.

A Compromise: Lincoln’s proclamation would not alter the Constitution, and it would not free the slaves held in the border states still loyal to the Union. Complete emancipation across all the country would have to enacted at a later date.

A Hope for Freedom: The announcement in September sent a wave of hope through the northern African American communities. For the first time in American history, a president was taking a major step toward ending slavery. Oftentimes, the slaves did not hear about the promised emancipation, but to those who did know, it offered hope.

Some of the 1862 on-lookers realized they were on the threshold a history-making moment. The questions, discussions, speculations, swirled. What would Lincoln do?

Looking back from a modern perspective and already knowing what happens (spoiler alert: Lincoln signs!), it’s challenging to imagine what the feelings were or might have been. In some cases, we’re lucky to have primary sources, but many other people didn’t (or couldn’t) write down their thoughts.

Sometimes, my colleagues and I try to choose a historical moment that we’d like to “time travel” to witness – if time traveling were possible. I think the final days of 1862 would definitely be in the top ten choices for me. The suspense of the moment, the chance to talk to ordinary Americans and see what they thought, and the opportunity to hear slaves or freedmen discuss the possibility of freedom “hence forward and forever”! And to just take in the moment without knowing the outcome.

1862 came to an end in America with many question marks. Lincoln’s action? When would the war end? How many more soldiers would die? Would Europe recognize either side or stay neutral? These and countless other questions lingered unanswered as the sun set on the final days of the second year of the Civil War. 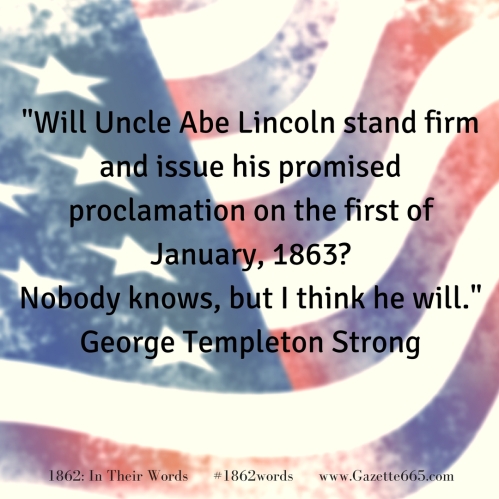