A faint meow distracted me. I glanced up anxiously. Mattie? Yes, there, a calico cat poked her nose curiously into the watchroom. After my days of searching, she had appeared when she was ready. Delighted to finally see her, I cautiously stepped down and then crawled across the floor, anxious to win her friendship with a gentle pat. “Here, Mattie… Aren’t you a pretty cat?” She stared at me for a second with scared eyes, turned, pressed against the wall, and darted back down the stairs. I plopped flat on the floor and leaned my head on my hand, discouraged. I was only going to be nice. Didn’t Mattie know that? Why was she still afraid?

Most people have affection for furry, feathery, or scaly little beasts that we call pets. All the way back into ancient times there’s evidence that folks loved their pets, so it’s not surprising to find pets woven into the historic “tapestry” of American lighthouse history. 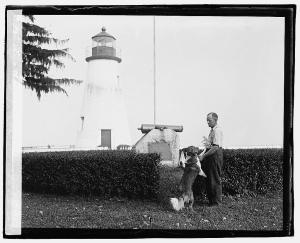 A lighthouse keeper and his dog (c. 1920) Library of Congress

When I started creating the characters in Lighthouse Loyalty, I knew Susan had to have a pet and Mattie the cat became an important, mischievous, and sometimes symbolic little character. And then there are the goats… Why goats? Well, it is historically supported, and I’d heard lots of fun stories about goats from my dad who had goats when he was growing up.

Today, I’ll share a few interesting facts about lighthouse pets that I discovered during research.

First thing to understand about lighthouse pets is most of them had a practical purpose. Although folks cared about their animals, they weren’t likely to have an animal that just caused more work. The pets had a purpose – perhaps providing a food source (that doesn’t necessarily mean they ate the pets!), helping with rescues, or keeping the rodent population controlled at the light station. 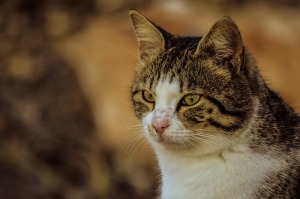 Cats are a traditional “pet” and working animal in the maritime world. Why? They’re independent, tend to look after themselves, and hunt mice and rats for their food. Just like cats were popular on board ship, cats were a very good and useful pet at a lighthouse. And there were lots of cats at lighthouses! Some were rescued in shipwrecks and stayed with the keepers, others were bought or befriended.

One of my favorite stories about lighthouse cats took place in the Depression Era at St. Augustine Lighthouse, Florida. Smokey –  a black cat – was the lighthouse children’s pet, and the little girl loved to dress the amiable cat in doll clothes. Well, her brother was curious about paratroopers and wanted to try to some parachute experiences; he had the lighthouse tower and just needed someone to make the jump with a chute. When sister wasn’t looking, brother grabbed Smokey and the test parachute and climbed to the top of the lighthouse – 168 feet above the ground. Harnessed into the parachute, Smokey was dropped over the edge and began the frightful descent! About the time he dropped the cat, brother wondered if it was such a good idea… Luckily, the parachute did open, and Smokey landed safely and ran off, pulling the chute with him. Sister was worried when Smokey was missing and cried every night until he came home…about a month later.

Barnyard animals were stabled at light stations that could safely manage them, adding to the food supply of the keeper and family. Cows and goats were good sources of milk and required basic shelter and safety from the weather. Chickens were also kept at lighthouses – as a source for eggs and meat. Lonely keepers and children often befriend their barnyard animals and enjoyed taking care of them. (Unfortunately, there were many cow casualties since these animals didn’t have the best sense on islands, cliffs, or in storms.)

In lighthouse lore, goats are routinely mischievous, tending to get into trouble and frustrate the keepers. For example, at Battery Point Lighthouse (California), two goats were supposed to eat the poison oak on the island. Once they finished that chore, they started eating the blackberries which annoyed the keeper who liked his blackberry pie. When he tied his troublesome goats, they wriggled around on their tether and ate his prize rose. One day the goats escaped the island at low tide and wandered into a local hospital, to the delight of the patients who fed the voracious goats their get-well flower bouquets until the embarrassed keeper arrived to collect his troublesome animals!

Blinded birds often crashed into lighthouse towers and lanterns, causing a lot of trouble and damage. Sometimes, keepers found these birds still alive and decided to nurse them back to health.

More frequently wild birds around lighthouses offered hours of bird-watching fun for the keepers and their families. Some became amateur authorities on the birds of their area.

Dogs are credited with saving quite a few lives throughout lighthouse history. Keepers tended to prefer large dogs who liked water and could be well trained. A skilled, loyal dog could be sent into the surf to rescue shipwrecked people that the keeper couldn’t reach. Dogs also watched over lighthouse children, shepherding them away from danger or alerting their parents when something went wrong.

One of my favorite life-saving animal stories involves a parrot. The keeper at Portland Head Light (Oregon) had an African gray parrot during his time there between 1904 and 1928. Billy was the parrot’s name and he’d been taught to talk. Billy routinely scolded the dog, praised Mrs. Keeper, shouted random nautical terms, and warned the keeper when the fog was coming in by screeching: “Fog’s in.”

Well, one day the assistant keeper’s son slipped on the rocks and fell into the sea. No one heard his cries for help expect Billy the Parrot. Billy fluttered out and hopped along the garden fence, squawking “Man overboard.” When the people didn’t pay attention, Billy flapped around the sleeping dog who woke up and started barking. As the keeper headed for the garden fence to capture his noisy parrot, he noticed the boy in the water and ran to his rescue.