Ever seen something practical, but it was just so mesmerizingly beautiful you couldn’t stop looking at it? You wanted to see it safe and protected forever as a piece of art…

That’s the way I feel about Fresnel Lenses. They were/are beautifully cut glass lenses used in lighthouses. Many are well over a hundred years old, and happily some of them have found safe homes in maritime or lighthouse museums.

Today, I’ll share briefly about how the lenses worked, a story about Fresnel lenses during the American Civil War, and a couple that I’ve seen in museums. 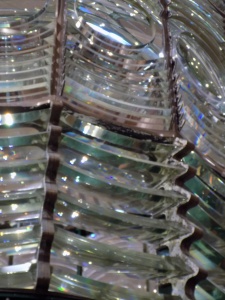 Part of a First-Order Fresnel Lens

How Did It Really Work?

It’s scientific… Augustin-Jean Fresnel was a scientist for Napoleon at the beginning of the 19th Century and he discovered a new way to play with and use light. Here’s a brief explanation of what he did:

“The parabolic reflector and the bull’s eye lens then in use in lighthouses [prior to Fresnel’s discovery] was known as catoptric. The problem with this system was light tended to escape from both the top and sides of the device. this led to the refractive lens, which bent light and directed it to a desired point. This is known as dioptric. What Fresnel accomplished was a single lens known as a catadioptric that combined the two former systems of focusing light. The lens contains a central reflecting bull’s-eye surrounded by a series of concentric prismatic rings and refracting prisms. In very brief terms, light is directed by the prismatic rings to the central bull’s-eye where it emerges as a single concentrated shaft of light traveling in direction. Fresnel’s lens, in general, is unchanged today.”

Moving on from the scientific details, check out this diagram from the Santa Barbara Maritime Museum, showing how a lens was positioned in a lighthouse. 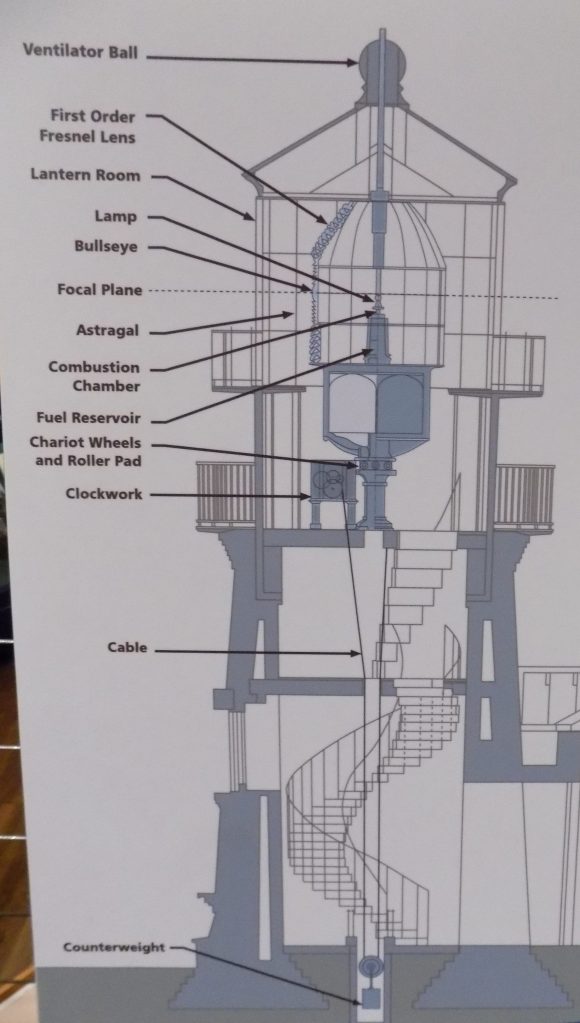 Note that the glass structure surrounding/protecting the lens is called a lantern. Also notice that if the lens revolved it used clockwork gears and weights to turn the lens.

During the American Civil War, as the seceded Southern states took over Federal government property, they took over lighthouses. However, with the Union blockade around the Southern coastline, the Confederates didn’t want to give any navigation aid or warnings to the enemy ships, so they darkened most of the Southern lighthouses. 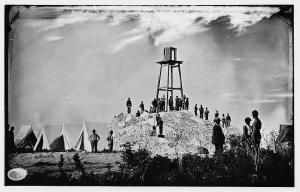 Morris Island during the Civil War. Note the ruins of the lighthouse in the background.

Darkened has a variety of meanings. A few lighthouses were simply abandoned, but most were damaged. Destroying lenses was a quick and easy way to prevent a lighthouse from carrying out its intended purpose. Some of the Fresnel lenses were scratched or battered. Sometimes, soldiers came up with the idea of using the lenses for target practice. (There would be a very sad emoji face here if WordPress allowed.)

On a happier note, at least one lighthouse keeper had Union loyalties and managed to hide the lens and other light equipment until his region was taken back by Federal troops.

Most Fresnel lenses are retired from service now. Some have met unhappy fates, but others are carefully preserved in museums.

Last autumn I was so excited to visit Santa Barbara Maritime Museum because they have a first-order Fresnel Lens. First-order means the largest type of Fresnel Lens produced (and it doesn’t have anything to do with the Star Wars universe!). I’d seen and studied a third-order lens at Cabrillo National Monument’s Old Point Loma Lighthouse and couldn’t wait to see the grand-scale version.

I wasn’t disappointed… Click through the gallery to see the size and beauty of this lens which was originally used at Point Conception Lighthouse along the California coast.

Part of a First-Order Fresnel Lens

In Lighthouse Loyalty, the lighthouse lantern and lens create a backdrop for some informative and pivotal conversations. Susan examines the lens and thinks about its purpose in Chapter 3:

I peered inside the lens where the lamps sat with coiled wicks, trimmed, filled with oil, and ready to be lit at sunset. It was light imprisoned. Imprisoned to give life. The thought made me hopefully sad, reminding me of my secret promise. No one would know when I was lonely. Imprisoning a secret to be cheerful and helpful to others, so they would think I was brave.

Scientifically and metaphorically, lighthouse lenses capture light, forcing it to become a beacon light visible far out at sea. Useful and beautiful, these lenses have had their place in history and deserve at least a moment of recognition and awe.

P.S. Have you seen lighthouse lenses? Which ones?

2 thoughts on “Those Beautiful Lighthouse Lenses”