In combat? Only one.

However, five U.S. Presidents were in the military or military leadership during the World War I years, and we wanted to note their service, highlighting leadership (or rising leadership) during this semi-forgotten conflict. Need a refresher course on why American joined World War I months before its conclusion and why the United States entered the conflict? Check our archives for articles about the American experience during World War I.

Now, on to the presidential trivia… Who served in the military during World War I and in what capacities? Answers ahead!

This former U.S. President patriotically got involved during World War I, serving on the U.S. Labor Board, helping the American Red Cross, and even enlisting in the Connecticut Home Guard. With National Guard units mobilized and sent to Europe, military force was still needed at home and home guards (like militia) recruited citizens for service.

On March 24, 1917 – just a few weeks before America official joined the war but when mobilization had already started – Taft set an example and volunteered to serve at home, allowing younger, better trained guardsmen to prepare to go overseas. 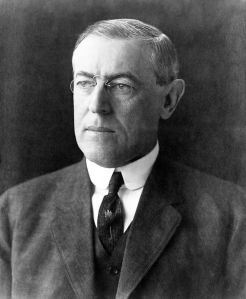 The president holds position as commander in chief of all U.S. military forces. President Woodrow Wilson kept the United States out of the conflict for three years, then guided the country through the declaration of war and about a year and a half of war, and laid a road map for the peace treaty.

Wilson didn’t have a military background, having spent his career life in academics, but he was a leader with strong convictions about neutrality, war, and peace.

From 1913 to 1919, Franklin D. Roosevelt served as Assistant Secretary of the Navy. He enthusiastically worked to expand the U.S. Navy and reformed the promotion system. Roosevelt claimed he owned 10,000 books about naval history, technology, and warfare and worked sincerely to build up the fleets while American watched World War I “neutrally.”

In 1917, when American entered World War I, Roosevelt tried to resign from his position to serve actively, but Wilson asked him to stay and help coordinate naval mobilization and deployment of resources. Roosevelt went to Europe during the war and nearly became a casualty when he caught the Spanish Flu and pneumonia. At the end of the conflict, Roosevelt personally ordered the Navy to keep its aviation program! Fly Navy…

Harry S. Truman was the only U.S. President to fight in uniform in France during World War I. From 1905-1911, he served in the Missouri National Guard, learning about artillery. In 1917 he rejoined the National Guard and was elected first lieutenant of an artillery battery. Truman had a difficult unit and worked hard to enforce discipline; by 1918, he and his men were stationed in France as part of the American Expeditionary Force.

Some of Truman’s combat service highlights included rallying his men during a retreat, destroying an enemy battery during the Meuse-Argon Campaign, fighting along George S. Patton‘s troops, and firing some of the last shots of the war on November 11, 1918. In 1919, he was discharged from service with the rank of major and new leadership experience that would influence his politics and character in the coming years.

World War I was not Dwight D. Eisenhower‘s war. It offered no chance for battlefield “glory” for this army captain. As soon American joined the conflict, Eisenhower applied for overseas duties, but he received assignments to Fort Leavenworth, Kansas, and Fort Meade, Maryland, instead. He trained tank crews at Camp Colt near Gettysburg, Pennsylvania, and was recognized for his organizational and leadership skills.

Just when Eisenhower got orders for France, the armistice was signed – one week before the assigned departure date. However, that wasn’t the end of Eisenhower and World War I history. During the 1920’s, he helped General John Pershing and the American Battle Monuments Commission, touring the European fighting ground and eventually writing a book/report about Americans on the battlefields of World War I.

It’s been one hundred years since the final year of World War I – 1918. This often forgotten conflict shaped the world and its leaders in important ways. While Taft set an example for the American Homefront and Wilson guided the nation through the conflict, young leaders like Roosevelt, Truman, and Eisenhower learned about war and experienced situations that would influence their thinking and future decisions when their turn came to serve as U.S. President.